Precise Products Corporation, Minneapolis, Minnesota, has been machining parts since its founding in 1956, retaining several original customers throughout its history, including Rosemount Aerospace and several divisions of Rockwell Collins. Today, nearly 100 percent of their work is for multiple aerospace manufacturers, mostly flat milling of various aluminum alloys, with some multi-axis turning and milling of various materials.

Owned through an ESOP, with nearly 100 employees, Precise Products houses 43 NC/CNC machines on a DNC network, 30 conventional turning and milling machines, and dozens of supporting machines within a 36,000 square foot facility. It maintains ISO 9001:2000 and the more exclusive AS 9100:2001 certification, recently receiving the 2008 Rockwell Collins Machined Metal Supplier of the Year award for quality, delivery and cost.

In 2007, Rosemount Aerospace, looking for cost reductions, presented Precise with a challenge: reduce the cost of a family of parts, or risk losing the job. The parts were six tubular shells that mount on many different aircraft. Made from nickel 200, each part is a different length, with slightly different angular cuts, hole sizes and patterns. Some have multiple venting cross holes, all of .031” diameter, while others have only one. Slots on the end also vary, with some wider and some longer. Typical runs produce between 300 and 1,000 pieces.

According to Brent Schmidt, a Precise employee since 1977, and manufacturing engineer since 1998, “Precise had been making the parts about twenty years, in two or three turning operations and two milling operations, depending on the configuration of part features. Now, our goal was to improve our production and make the part in one operation, allowing us to drop the part off complete.”

Their equipment supplier demonstrated what could be done on a Swiss lathe, and the shop purchased the 6-axis Citizen-Cincom C32 2M8, equipped with the 12-foot CAV32-IS bar feeder, Cool Blaster Mist Control 850, and Cool Blaster CB510, which provides pressurized coolant at 2,000 psi. The Citizen can handle up to 1.25” turning diameter and 12.5’ stock length, and has dual C-axis spindles, plus live tooling and Y axis. With its multi-axis simultaneous motion and tool capacity, the machine can mill, turn and double drill complex parts. As a Swiss lathe, it machines close to the guide bushing at all times, which enables turning long parts of small diameters, without chatter, leaving a superior surface finish on the most challenging parts.

While investigating machines, Precise also looked at multitask machining (MTM) software from different vendors, and found that adding theGibbsCAM MTM module was the best choice. It was more economical; it had the required capabilities; it integrated milling, turning and utility operations; and it used the same menus, icons and dialog boxes already familiar to programmers. “Until then, we didn’t need MTM software,” Mr. Schmidt explained, “The standard mill/turn capabilities of GibbsCAM easily programmed all our turning, including live-tooling and C axis on our Haas SL-20 and our Hitachi Seiki HiCell 23, which also has a Y axis. We’ve had that mill/turn capability since we acquired the software in 1998.”

Mr. Schmidt says GibbsCAM MTM has all the Swiss functionality execute and verify all codes and machine modes easily and accurately. The software’s Sync Control is one feature he likes, because it automatically alerts the programmer when there is a conflict, such as attempting turning and milling motions simultaneously. “If I enter a machine mode that doesn’t belong, a dialog box pops up and tells me that sync codes for conflicting moves are not allowed. It’s a great safety feature.”

Mr. Schmidt added that, unlike the 5-axis mill programmers at Precise, he doesn’t use GibbsCAM machine simulation, because he has “not made the time to build the machine model for Machine Sim.” He does visual verification with Cut Part Rendering (Flash CPR), a standard feature he finds valuable. “What goes to the machine must be what I see on the screen,” he said. “I watch which tools are cutting where and when, and ensure there are no crashes. Everything goes through CPR. If there’s a gouge or collision, a red mark on the screen, it’s going to be on the part, so I rely on CPR a lot.”

He also uses the Analyze Cut Part feature, which compares finished machining against the part model, showing discrepancies, such as unmachined features or machined material that should not have been removed.

GibbsCAM Operations Summary also improves productivity for Precise, computing and displaying actual cycle times. “It does not account for non-cutting motion,” says Mr. Schmidt, “But it doesn’t matter, because with the Citizen, there’s no indexing. We just move from tool to tool, and it’s pretty fast,” he explained. “The Operations Summary is really accurate. I use it after Cut Part Rendering to ensure that my cycle times are within budget, and we use it for estimating jobs.”

The features of the Citizen Swiss lathe and GibbsCAM MTM enabled the shop to keep the job and nearly triple its goal. “By meeting our production goal, we reduced the cost of each part by over twenty percent,” said Mr. Schmidt. “On a run of 300 to 1,000 parts, that translates to a lot of money.”

Although the machine and software were purchased to save that contract, they’ve proven themselves with additional parts. One is a cylindrical, 300 stainless steel part about 3.5″ long, milled to a square in the middle, and threaded on both ends, where machine modes were instrumental. “With GibbsCAM MTM you have the Utility Box, with machine modes, to control all non-cutting motion, such as subspindle in, subspindle return, move tool group, execute part transfers, or use subspindle as steady rest to support stock as you turn it,” Mr. Schmidt elaborated. “You select the utility operation you want, and it puts the proper code into all three flows, or tool-group sub-programs, automatically.”

The Swiss machine and GibbsCAM MTM also made a huge difference on another part, about 4″ long, also made of 300 stainless. It had been made by drilling through from one side, flipping it to drill from the other, and then reaming all the way through. In a production run, it took four minutes to make each part in three operations, using peck drilling. “With MTM programming, the Citizen was dropping a finished part a minute,” Mr. Schmidt said. “Because of the high-pressure coolant, we drilled straight through, with no peck drilling. It was incredible. We alone dropped the cost twenty percent, which made our customer very happy.”

Through MTM software and the Swiss lathe, productivity was also improved on a tube for Rockwell Collins, made from .375 diamater 300 stainless steel, and finished at 11.5″ long, .125″ diameter, with a cross hole, relieved in the center, and a hex milled on each end.

“With GibbsCAM MTM driving our Swiss, we’ve exceeded expectations on cost and cycle-time reduction, and we make parts we couldn’t make before,” said Mr. Schmidt. “One part was enabled by the ability to pick off parts without chatter. We made pins of .040” diameter, about .300” long, from .125” round brass, which we would not have been able to make without a Swiss, but we had pins coming off like popcorn, at nearly 300 an hour.”

Mr. Schmidt said they have many more examples of productivity gains from using GibbsCAM MTM with Hitachi Seiki mill/turn machines, but “it was programming the Swiss lathe with GibbsCAM MTM that really reduced costs and increased productivity.” 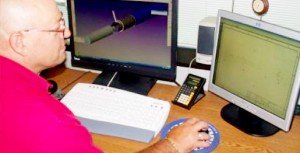 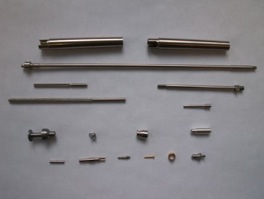