I’m rebuilding (slowly) a CVA in the UK. The apron is currently in progress and there’s a separate thread here about it.

Because mine had suffered coolant damage I bought a spare CVA apron from a similar age machine with the intention of picking the best bits from both. I stripped and cleaned all the parts from both aprons and I’m now at the ‘pick and mix’ stage prior to re-assembly. I appreciate that it might not be wise to mix parts from two machines but what follows is before any interchange.

Here are the parts of the cross-feed clutch from my original apron: 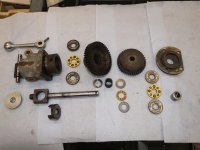 and here it is assembled next to the one from the spare apron: 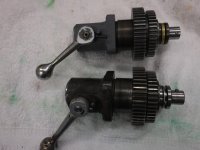 In both cases the feed clutch is disengaged. 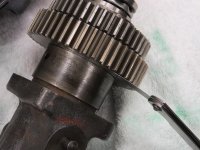 I can get a 6 thou feeler gauge in. As a result the gear turns freely since it is sandwiched between thrust races.

On the original the gear rubs against the casting and does not turn so freely. The inner thrust race is not taking any of the axial force exerted by the spring. I then put new thrust races in and although they were a few thou thicker than the old ones it did not stop the rubbing. Adding a 0.015” shim washer behind the inner thrust race seems to do the trick but I can’t see why this should be needed when everything else is made to such a high standard.

At this point I made the same comparison with the longitudinal feed clutches with the same results.
I’m fairly confident that the designer intended the thrust races to be loaded whether the clutch was engaged or not and I’m pretty sure that the round dial 10EE and CVA apron internals are very similar if not identical.

Has anyone found a similar issue on a 10EE apron rebuild?
You must log in or register to reply here.