I just replaced the end-gear (idler?) bearings on my 1946 square-dial 10ee, and I thought I’d post what I did to help anyone needing to do the same. I’ve read about other solutions for replacing the hard-to-source original bearings, like cutting your own snap-ring grooves, but my solution was pretty painless.

I *think* the gears are PNs EE2863 and EE2865 on sheet 142. They are located under a cover (EE2858) behind the spindle drive belts. The cover can be removed with the belts in place if needed. The compartment is basically dry. Teeth on the gears in the compartment are lubricated by oil riding up the gear-train from the sump at the very bottom (well below the cover), but the bearings themselves are shielded and permanently lubricated (grease). 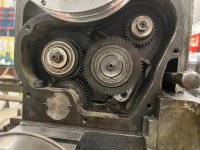 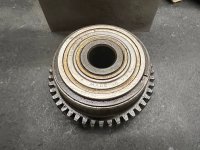 I noticed some noise coming from the area when configured for threading, more than my 1947 10ee. When I pulled the two gears out the bearings didn’t feel smooth so I decided to replace them. After pressing them out they loosened up, but I suspect whatever grease or oil is inside was dried out and no longer doing its job. 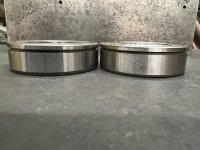 For each gear, the inner races are on a spacer (EE2872), which is retained on a mounting stud on the “banjo” (EE3126) with a hardened washer (EE1088) and a nut (426-3). The hub can be easily pressed out using an appropriately sized deep socket. The outer races are a light press fit into the bore on each gear, one from each side, and there is a gap between them. They can be removed by taking off one snap ring, and pressing the bearing on that side through the gear and out the other side along with the second bearing.
Since the new bearings I selected don’t have an extended inner race, shims are required on each side of the inner races to center the gear on the spacer. The height from the shoulder to the end of my spacers was about 1.341”, versus 1.275” measuring outside the inner races in the installed new bearings. So there was about 0.066" to make up, split between the two sides. I ended up needing a little more than this.

I bought some packs of shims from McMaster that are 0.031” (nominal) and 0.002” thick. I ended up using one thick and two thin behind each gear, and one thick and two thin in front to match the height of the hub. With the hardened washer and nut installed, the shims can be rotated, but there isn’t any axial slop and the inner races don’t turn. The shims were McMaster PNs 3088A436 and 3088A166. These are 1”ID but fit the 25mm OD spacer. The 0.031" shims worked better than the metric-series options. 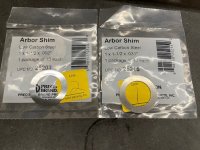 The old cover gasket was trashed and ineffective, so I made a new one out of 1/64” Garlock 3000 and glued it to the cover with Gasgacinch. It should be removable for access without ruining the gasket. 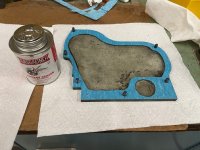 The end result was that replacing the bearings quieted the gear train down quite a bit.

One question: Is the location of the end gear “banjo” (EE3126) adjustable? If so, how do you properly set the clearance on the gear teeth?

ee_chris said:
One question: Is the location of the end gear “banjo” (EE3126) adjustable? If so, how do you properly set the clearance on the gear teeth?
Click to expand...

I go old school and run a chunk of kraft paper between the teeth and press the teeth together with the paper in place. Run it back and forth a few times and you're good to go.
E

I decided not to change the gear clearance. The chamfered corners on the gears can be different and visually deceiving, and upon further examination the clearance seems fine.

I found an issue when I removed the cover again: There is a round plug in the gearbox housing held in by two set-screws in tapped holes in the perimeter. There is a recess inside the cover for the plug, but the recess is slightly misaligned. The set-screws stand a little proud of the housing, by more than the thickness of my new gasket and the original gasket too. The cover bottomed on one of the set-screws, preventing the gasket from sealing the cover at the bottom.

This is how it has been since the lathe was made, and the accumulated oil muck below the cover shows it. The top part of the compartment isn't immersed in oil, but it can still splash inside and run down. Rather than mess with the set-screws, I used a die-grinder with a carbide bur to relieve the cover enough so it would sit flat and allow the gasket to seal.