This 8” Caliper might win the award for “Coolest Looking Adjustment Knob”? It is from the rare Wm. W. Smith patent of Oct. 1 1850 (#7,689). One of the other interesting things is it has a helical spring in the hollow cast head. I say these are rare because in 40 years of collecting I have only seen 2 of them. I scored this off ebay a couple months ago. The knob is cast brass and I just love the flutes and how they round the outside and go into the center. That pattern maker had fun doing that, I bet he was very proud as he should be. Another interesting thing is the patent was witnessed by Joshua Stevens, who I would guess is the J. Stevens of Chicopee, Ma. since Smith was from Boston. A few years later Stevens produced his own helical spring caliper all formed from one piece.
It just goes to show you never know what rare thing from the past could show up on eBay or somewhere else at any time. 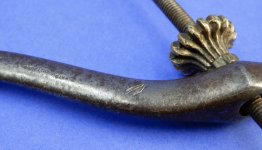 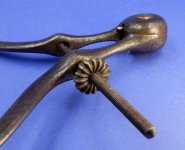