This is the 1st type “LAST WORD” test indicator which has been a mainstay in machinist’s tool chests for over a 100 years. For those not familiar with how they work a test indicator measures movement to a thousandth of an inch or finer. It is used to center work in lathe and to locate an edge or hole on a milling machine among other things.

Henry A. Lowe of Waltham, MA. came out with this Universal Test Indicator in 1902. While it looked like his later indicators it was a WHOPPING 6 1/2” LONG. By 1907 he moved to Cleveland, OH. and shortly after started making the modern version we know today shown for comparison, its only 2 1/2” long. The scale on the back was replaced with a crystal covered dial. Lowe stamped his 1902 indicator “Patents Pending” but for some reason it took years before he was issued his first of 3 indicator patents on June 29 1915 (#1,144,367). The L. S. Starrett Co. bought the H.A. Lowe company in 1935 and still produce the famous “Last Word” indicators.

Nearly 120 year ago Lowe wrote “No modern mechanic who TAKES PRIDE IN HIS ABILITY and expects to keep up with the procession can afford to be without this LATEST, NEATEST, MOST VALUABLE AND UNIVERSALLY USEFUL OF ALL mechanics tools. It is bound to become the MOST VALUED accessory of EVERY TOP NOTCHER’S KIT. Its moderate price places it within the reach of EVERY INDUSTRIOUS MECHANIC and he gets MORE ACTUAL USE AND VALUE out of his investment than from any other tool in his collection.”

A note about this quote, Lowe used a bold typeface where I have used all caps, he also used the term mechanic to describe what we now call a machinist. For all his insights into how useful his indicator would be in the future it seems it never occurred to him it might someday be used by women.

I should add these are pretty rare, it took me over 35 years to find one for my collection. A few weeks ago it showed up on one of many ebay searches I check each morning. I was barely awake and saw the picture on the listing and hit buy it now before even reading a word. I then turned over and told my sweetheart “Omg, an early Lowe indicator just sold on ebay” and she said “how did you miss it?” And I replied “I didn’t, I just bought it”. Then I read the read the description.

Congrats Rivett on a very nice find.
Always thought the precursor to the Starrett "Last Word" indicator was cool.
Here are a few pictures of the one I've had in my tool box for years. Looks and operates as the day it was made.
CWC(4) 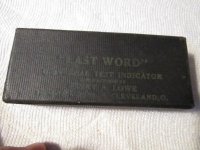 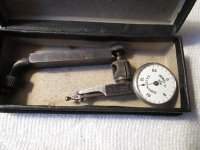 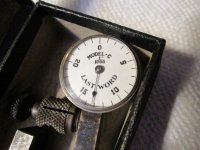 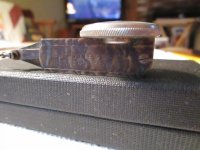 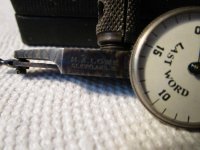 That one is in great shape. Lowe must have had quite a good business going before Starrett bought them out in 1935. I guess the reason is the design was good and simple. They work just as good as they did the day they were made.

What is the serial number on yours? Usually found on the clamp side.

I have a couple "last word" indicators. They look good in the box. When I want a measurement, I use a "Spot-On" that I have, or one of the Federals. At least they work without sticking.

I wonder if that Lowe unit was known for sticking? Be interesting to see if that is new, or a survival from the first one.

" Be interesting to see if that is new, or a survival from the first one." not sure what you mean? The 1902 model is certainly no new.

Robert Lang, Yes those are the photos from the listing, It even has the additional tip with it. Thanks for sharing them. The condition is amazing.

I was wondering if the Lowe version exhibits the obnoxious sticking the Last Word is known for, or if that is a Starrett-added feature.

I don't know, none of mine seem to stick. Was that happening on this style or the later round body type?

Round body Starrett. Older ones I have, and the new one I borrowed.

Usually a bath in solvent fixes it for a while.

Hummm,,,, that is interesting. Henry Lowe’s last two patents in the 1920s were for the round body ones. Maybe not such an improvement after all?

I'm not sure the shape matters, it is the mechanism. Although my old beat-up "Spot-On" which is essentially the same thing, and has always worked flawlessly. I've never looked at the mechanism, but it is built like a "last word" and probably has the same helix and sapphire peg system.
C

Awesome Score! I'm glad you finally were able to locate one!
You must log in or register to reply here.