So, I'm sort of the default machinist at work since I'm the only one with any desire to do it. I started three years back with a lathe I found on the side of the road for $900. I really like the old girl, but the manual for Lodge and Shipley in that era isn't exactly what you'd call informative. I also seem to have some features I haven't seen on any other machine.

It's a selective head 16"x12' from 1917. I have a taper attachment, an original and a shop made steady, and several different styles of tool holder. I've learned to thread on it, though I haven't quite got tapered threads figured out yet. The previous owner was making some type of air operated thing that I haven't figured out the purpose of, and there's some kind of system for attaching bars to the lathe for some purpose the manual doesn't explain well.

I'd like to get some new gears for it, because the ones installed seem to be a bit sloppy. Also, the taper attachment seems to sort of lag, and doesn't seem to make the taper you set on the dial. At 3" per foot, it seems like a 3" shaft should taper to a point at 6", but it doesn't.

I've been told there are some real Lodge and Shipley aficionados here, and I'm hoping someone knows some things.

Anyway, the machine has some foibles I'd like to work out of it, but has been a good machine. I'm sure there's an adjustment procedure for the clutch, and as much as I am told they're supposed to leak a little, I'm sure oil literally running out the back of the gearbox when you're half way on the sight glass isn't right. Leftmost gear lever doesn't engage in leftmost position unless you pull it left past the leftmost detent hole. Good luck keeping the tailstock any kind of centered. Need to know how to get the apron off/apart (and hopefully back together) to fix loose stuff inside. Someone's previous braze job is holding a plate loose behind the apron.

Despite these defects, I always seem to be able to make a part that works with it. Last spring we also set up a mill to add to our capabilities, a K&T 2D which I am also learning on. Haven't been able to convince the boss I need a shaper yet, but I am sure as soon as he wants internal splines I'll have to explain it to him again.

Anyway, looking forward to meeting some of the people here who know these machines, and maybe more than the (terse) manual has to say.
A

"Mystery hole" is generally a well for white lead center lubricant, from the days before rotating centers were common.

"FDS" is feeds, being expressed in turns per inch as opposed to the now-common inches per revolution.

"Weird bar mechanism" was a feed knockout system. As I recall you could set multiple stops for doing production turning. I think it's shown/discussed in one of the catalogs here (been a while since I've flipped through them):

Sent from my SM-G950U using Tapatalk 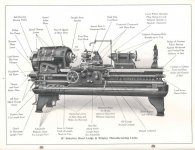 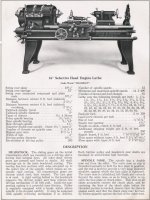 Oil - if lathe is actually level and oil runs out, its too full. Sight glass to be disregarded as needed. HS and clutch share the same oil level. Clutch actuation enters oil chamber via a packing gland which on my 24" tended to drip - so I had a drip can. Maybe I can dig up adjustment info on this cast iron cone clutch job

Here is the clutch parts page 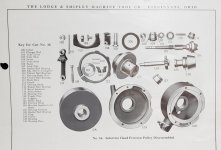 Yeah, that's the vague picture I saw. Doesn't really give you a good look at it or suggest how it works. I think I downloaded the same book from vintagemachinery. It would be nice to be able to set something to stop the thing when threading close to the head.
As to 'modern expression' I don't think I've used either. I just know they're all too fast to make a decent finish, and the previous owner commented to the same effect when I ran into him recently. Roughly half the lowest speed would probably be about right. It makes me wonder if there is a way to replace one of the gears with another with a planetary inside to get it closer to a reasonable speed.
As to the clutch, it's nice to see something about it, but there still must be an adjustment procedure of some sort. I have to lean on the handle when I kick it out to make it stop. Maybe that's the intended behavior. I'm not sure.
J

To get a kickout while threading (leadscrew) you basically need one of the high speed threading attachments that were made by third parties for most popular lathes............Most clutches have a threaded ring to adjust the pressure,those without may have individual screw adjustment of operating arms or some such .......every clutch will have a wear adjustment in the assy somewhere. 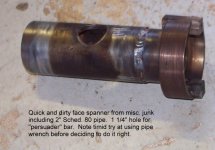 The production stops kick the feed rod out, not the lead screw, so can't be used for threading.

Most lathes of this vintage do have fast feeds. The philosophy back then was use a much wider cutting surface on the tool than what became popular later on.

Sent from my SM-G950U using Tapatalk

Roughly half the lowest speed would probably be about right. It makes me wonder if there is a way to replace one of the gears with another with a planetary inside to get it closer to a reasonable speed.
Click to expand... 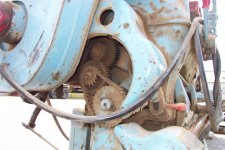 As to slow lathes and fast feeds, it was the norm for a long time - so well illustrated here at American Tool Works in 1915. The lathes went slow but the feeds were not slow 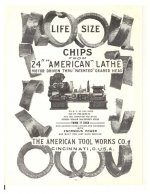 Andy FitzGibbon said:
The production stops kick the feed rod out, not the lead screw, so can't be used for threading.

Most lathes of this vintage do have fast feeds. The philosophy back then was use a much wider cutting surface on the tool than what became popular later on.

Sent from my SM-G950U using Tapatalk
Click to expand...

Yep, that's how my Nardini works. Many times I've wished it had a kickout for feeding, but, oh well.


Dan
You must log in or register to reply here.

D
Wade 8a motor and bracket assembly (under cabinet)

D
Wade 8a parts For Sale