Look what followed me home today.

I moved about 8 months ago and sold my Atlas before I moved, as I was planning to upgrade.

In western Wisconsin, there pretty much aren't any lathes, except that you'll have someone selling a 9c for $2,000.

Found a 1947 9a for a reasonable price, plus it came with an extra steady rest and a milling attachment, which will eventually get sold to help pay for the lathe. 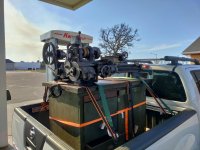 It was owned by a dairy farmer who upgraded to a Colchester.

It's dirty and oily. It's got a visible ridge, but you can't catch it with your nail.

The two collar test and a test cut on a 6" long bar showed the bed was in good shape.

Being a 1947, it didn't spend its first years running around the clock making parts for the war.

Had to dismantle it to get it off the truck, so thinking about restoration or not.

At this point, I need a running lathe so I will put that off for now, but I'm going to order Steve's book and felt kit.

I still have my axa toolpost and gobs of holders as well as at least 8 chucks all in 1-1/2x8. It didn't come with collets or a drawbar, although I have some 3AT I could use if needed. Have a 5C collet chuck I need to fit.

I've always felt like an "associate" member of the forum, having a South Bend drill press, but now I have upped myself to full member.

You have the newer style feet, which I didn't think started that early. I thought the 1947 beds were the ones with "SOUTH BEND" cast into the ribs between the ways. Those were different beds and feet used for a short period of time.

In any event, it doesn't really matter. I'm just trying to put some finer points on the genealogy.
S

The dating was based on the serial number and Steve Wells' database.

I'm going to get the card from Grizzly.

Steve
You must log in or register to reply here.

Refurbished 1947 9A for sale in Portland, OR

S
South Bend 9a - what do do first