Posting these here for more audience, hoping to avoid them being scrapped!

Note: These are not my machines, machines are NOT under power, and machines have been under a tarp for about 3wks outside. Yes, crappy.

1968 VHF-3 based off serial number. The right angle drilling attachment DOES NOT go with the machine. (I already bought it, but don't need a 3rd Abene...)

The Harig, I didn't look too closely at it in person, but it seemed to be in OK condition.

I was told both were running fine when removed. Guy says if he can't get $500/ea in the next 1-2 weeks, they're getting scrapped. That being said, I called dibs on a bunch of small parts if he does scrap them.

Anyway, here's some photos. (I don't have any of the grinder in its "outside" state, only the Abene).

These are both listed on facebook by the owner. I can provide the facebook links via PM. I could ask for a phone # too, if interested. I just would really hate to see these get scrapped... (guy has some other machinery stuff for sale too, you'll have to ask him...) 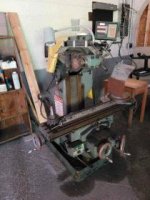 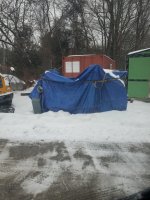 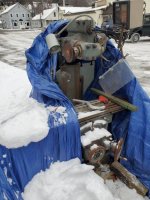 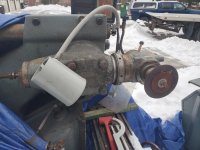 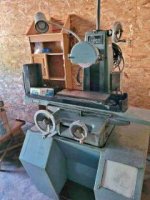 Would be interested in the support bracket for the Arbor for horizontal milling in the Abene. Though I am not sure it would fit my VHF340 ii.

Unfortunately that support was missing. Totally forgot to mention that in my original post. I had asked the guy though if he saw it anywhere but the machines have changed hands 3 times in a short amount of time...
G

I have interest in the column light off the Harig 618 if it doesn't sell. Looks like this isn't set up for coolant, is it? What is the mag chuck and controller? This unit located in Maine?

Not sure about coolant, and forgot to mention it's in Bristol NH

Both machines have been sold, and not destined for scrap!

As a Abene owner that is good news to here.
You must log in or register to reply here.