Adventures with a Lleaking FP3 / wipers & seals maintenance -- some questions

I have a good old FP3 I have been using for a few years now. It has always been leaking slightly from the back of its ram and dropping oil onto the top of the motor.
I was aware of the problem, discussed it with my friend TNB, who I got the machine from. Never really worried me...
...until it began getting much worse with more and more oil ending up in the chip pan and down into the sump.
The machine behaving nicely and located against a wall with very little rear access, I did not investigate any further.

Well a few weeks ago I had the house water boiler giving up for good, and had to shuffle the machines in the shop to access it ;-(
So good old Miss FP3 ended up in a new place in the shop where I can move around better. So I took time to level it 100% nicely, and began trying to understand where the oil in the sump came from.
Turns out that the upper (spindle) gearbox was almost empty and it was its oil down there, and also leaking on the motors, etc.
Some more digging & I found the motor belts were almost melted too...

So it was time for a good disassembly... removed the motor, that also got new bearings while I was at it, cleaned everything & changed belts.
Guess where most of the oil seems to have come from ? 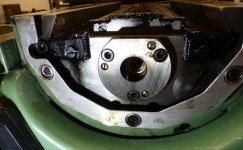 The wipers at the rear of the upper ram were just melted. These were not the original wipers, but approximations made out of a plastic of some sort that was melting like crazy. Turns out the wipers at the front of the ram are also made of the same material, also melting badly.
I knew then that it was time for a new wipers kit (Abstreifersatz) from Herr Singer's dream shop. It arrived slightly early for Mother's day and I am in the process of installing it. It also has the wipers for X & Z.
So I have disassembled & cleaned everything, drained the crank case & removed the dreadful plastic sludge that went just everywhere the oil cared to carry it.

It appears M.Bozo who already visited the machine was a pretty generous dude with sealant too, and that his sealant was no better than his wiper material:


Given that the existing documentation does not mention these details & I could not find any picture of this part of a 100% fit FP3, I have a couple questions before I reassemble this cover.

Question 2:
Please look at this picture: 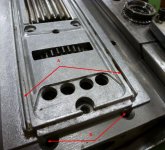 location A: these are grooves that are in direct alignment of the small seal segment that takes place in the front wiper carrier(part numbered 12 in the following picture). 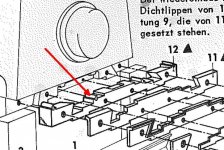 I find it pretty strange that the grooves in the long aluminum cover don't hold any lip seal with a profile like the segment in the front part.
Is any FP3 owner out there able to confirm his machine does not have anything in theses groves ?

Question 3:
Looking at the same photo of the cover, location B shows threaded holes for tapered head screws that I found empty & full of crud. Anything missing from my machine ? Nothing apparent from all info I could find, but here again if someone has a similar machine & can confirm...

Now as a bonus:
Question 4 : there is a pretty bizarre screw on the side of the ram dovetail: 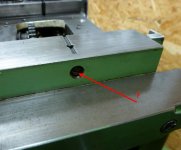 it looks as it would close the small lubrication channel that comes from the top of the dovetail ending up at the tail bottom, but the screw is loose & closes the channel if you screw it entirely...this is minor, but weird

. Anything similar on your machines out there ?

-Phil
You must log in or register to reply here.