Got a buddy with a recently purchased (secondhand) later production American 20" lathe with the 27 speed headstock (think it says 'Model B') that has apron mounted leadscrew reverse. Upon attempting to help a younger guy learn to cut some LH threads today, I discovered that the leadscrew reverse isn't working. The leadscrew works fine in the lower clutch (RH) position, and pulling the clutch up to mid position shifts the leadscrew drive to neutral, but pulling further up does not reverse the leadscrew. We made sure to only try under 200 RPM since there's a data plate warning about that on the machine. We pulled a couple covers off to investigate a little but there isn't much of consequence visible. We were able to see that there is a shift fork with what appears to be a thrust bearing operated by the reversing lever and what is visible seems to be functioning correctly, but whatever the shift fork is manipulating is buried deep inside the lower part of the headstock and not visible without further disassembly. Anybody familiar with these and maybe been through this before and have an idea what may be going on? I'm starting to think someone disregarded that 200 RPM warning at some point and slammed reverse at high speed and damaged something.
E

eKretz said:
Anybody familiar with these and maybe been through this before and have an idea what may be going on?
Click to expand...

I lost a key in a driven gear in an earlier model and finally had to fix it ... there's a lot of stuff in that headstock. It's not fun to work on (unless you are a masochist).

I'd just leave it and run the leadscrew normally.

texasg, on the other hand, would probably take this opportunity to regrind the ways

Yeah I figured either a sheared key or a totally murdered gear. I was hoping it wouldn't be totally awful to get to. Like maybe just pop out the leadscrew/feed shaft tapered pins and remove the QCGB and replace the sheared key real easy like... but yeah, probably wishful thinking.

And yeah, Charlie would have had it apart already... With pictures.

eKretz said:
And yeah, Charlie would have had it apart already... With pictures.

Hey, I resemble that remark !

I don't know Americans, or Pacemakers very well. . . yet ! But let's assume they didn't totally reinvent the wheel when building this American in question. That at its core, mechanically it is similar to a Pacemaker. From the Pacemaker parts book it also has a 27 speed: 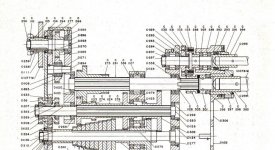 But LS reverse I would expect to slide a gear from engagement from one gear to another to effect the opposite rotation. Something like part 273. But I don't see that 273 is going to change rotation, unless there is a gear cluster mounted above it, that is not in the pic, but part of another parts picture.

Most likely I'd have to lay hands on it. But if you have access to a bore scope, you might be able to peak around corners to places you can't fit your head into. Might see something. They go for cheap these days too if you're interested:

Before you get too carried away, I know we're all good at taking stuff apart. But I've got a friend who pulled the drive motor out of a machine to fix the wornout pinion, pretty simple job.

That was forty-five years ago.

I've got a video borescope. Might not be a bad idea to bring it with next time and try to see if it can get a peek in there. LH threading isn't a super common occurrence, but if it's something as simple as a sheared key, sure would be nice to get it fixed if it's not too many hours worth of PITA to reach. At this point I wouldn't be doing the work anyway, with my back issues it would take me too long - I'd have to take too many breaks to get away from the pain to make it a job I could do in a working shop. My buddy and one of his guys would be doing it, with me harassing them a bit maybe...

In my own little shop it's different, I can take as much time on stuff as I like.
A

I’ve got the 16x54 version of that lathe. American, square head. Unfortunately I can’t help with the problem, never had mine apart. But the lead screw reversing clutch is so incredibly nice to have you must fix it. It’s not like you only need this for left hand threading. I use it all the time for any thread. Once set up I never disengage the half nuts. Don’t use the threading dial except on the first pass. After that just flip the clutch up and down and advance the tool. Super great feature of this machine.

i have a 16x54 pacemaker and it has the reverse on the apron as well. on mine there the switching of the lead screw is in the feed/speed gear box and not in the headstock. im assuming yours is the same way. if you follow the rod that the lever hooks to, you can follow it to the side and follow the linkage. i can look up under the gap in the gear box and see if the linkage slides the gear back and forth.

climb-101 said:
i have a 16x54 pacemaker and it has the reverse on the apron as well. on mine there the switching of the lead screw is in the feed/speed gear box and not in the headstock. im assuming yours is the same way. if you follow the rod that the lever hooks to, you can follow it to the side and follow the linkage. i can look up under the gap in the gear box and see if the linkage slides the gear back and forth.
Click to expand...

The rod goes into the side of the quick change gearbox but it's just moving a pivoting shift fork there. Like I said, we pulled the covers and had a look the best we could. The shift fork is manipulating something else (gearing) inside the headstock. On the non-apron-clutched models the leadscrew reversing rod is inside the headstock end cover inline with some internal to the headstock gearing - I'm assuming the apron clutch lever is just moving the same gearing that is manipulated by that rod but via the shift fork. That gearing may come out with the QCGB, (I don't think it will, probably just the shift fork) but no easy way to get a look on this later (square-head) machine without delving further into the parts blueprints or taking it apart.
R

The jaw of the single tooth clutch may have been rounded over during the sliding clutch engagement.
H

Once you find the trouble, pm me a reminder, and any pertinent info. I have a bunch of American lathe parts I purchased from a retired factory field tech in a crate. I just may have what you need.
B

The gentleman that sold me my Series 60 "demonstrated" the lead screw reverse feature by violently pulling the lever upward, as the lathe was running around 600 RPM with feed engaged. Clack clack CLACK!