Anyone know this UCM BTR Manufacturer or Model

I have just finished restoring an old Matsuura 710V, 1980's model, the very last thing is getting it to read code properly. So I have finally got my post-processor working and can run a program but it is very jumpy. I have a UCM BTR board that takes serial on a drip feed from my computer into the old tape reader cable, it drip feeds absolutely perfect. The biggest issue is that the baud is setup as 1200 Baud which I believe is far too slow, so each movement is jumpy.
There are two sets of DIP switches called, SWB1 and SWB2. SWB2 is set at 00110010 and SWB1 set at 00000000, that equates to 1200 Baud.

I found a picture online of the exact board I have, but after hours of searching I still can't even find a manufacturer, model name or any info on it. Here is the logo. 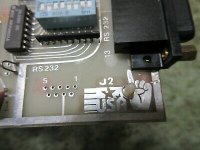 If anyone can help me out on the Baud settings it would be greatly appreciated, as the machine is very slow.

Do you have the parameters for the machine? I'm guessing you would need to set the machine parameter to receive at something faster than 1200 baud (although not sure that the control can even do that).

What is the IC part number that has traces directly connected to the RS232 connector (next to the display in the corner)? I can't make out that number.

Not sure if you have the Yasnac 2000G controller but I'm posting the link to the manual for the posterity's sake. Yasnac 2000G Manual

Found a thread on the unmentionable CNCZ*** that has some really old Circuits West BTR board documentation. Maybe the board you have is a copy of the Circuits West or vise versa. Could get lucky. Just take a pic before you start tinkering!
Redirecting to https://www.*******.com/forums/fanuc/42717-positions-5t-control-2.html
E

Thanks Bug for the reply,
I do have the manual for the machine, a 3000G in this case and I have played around with the parameters a bit, I did a full electronics restoration so had to get familiar with them.
As far as I can tell there is no where specifying the Baud limit on the control itself, it works on a system that it reads a position and once completed will output a signal to say it's ready for the next, probably how it indexed the original tape.
Someone added the BTR at a later date because it's not in the manuals at all.
I did check the IC's on the board, first thing I researched, they're just serial to parallel shift registers. I think all the data will be in the microcontroller itself, not even any markings on the chip other than UCM.
I checked out the link and it seems it doesn't quite tie in with my board, but it has given me an idea.

Looks as though one set of switches is for transmit and the other receive. So at least now I only have to worry about one set of switches. It also looks like the bottom 4 switches could be settings and the top 4 are for the baud rate. So taking the top 4 currently I have 0011 which equates to 1200 baud. There's no saying what increments it might increase in, but if I switch all these four switches on I could test some common baud rates to see if I get communication, such as 9600 or 19200, I'll update you tomorrow, fingers crossed.
E

Ok, so I have the results ! This may help anyone else out too.

SWB2 has nothing to do with Baud rate, it is the serial transfer settings.

I can't believe I never noticed before but when you press the reset button it reads out the baud rate on the 7-segment display, so now I feel kind of silly for not seeing that earlier.

Increasing the baud rate makes absolutely no difference on speed, it's still jumpy due to all the little linear movements fusion 360 makes, so in the end I'll leave it at the default 1200 to reduce errors. I guess the machine isn't fast enough for modern CAM software, but it's still useful. Wish I had done a retrofit instead of refurbishing the drives now.
You must log in or register to reply here.

S
Adding Fanuc Nanosmoothing functions to a CAMWORKS Post - has anyone done this?