Currently I'm working on a Taiwan Variable speed mill. The noise that come from the machine is a belt slippage noise when over 1000 RPM in high and about 200 RPM in low.

Sorry about the photos they uploaded at 90 degrees for some reason.

First I already had the machine in the lowest speed in either range. With the machine isolated at the power the motor was disconnected. The motor cover was removed from underneath, removed the three cap screws and carefully pried the bottom cover plate of with the assistance of some small fox wedges. The bottom bearing of the motor shaft was removed with a small 3" bearing puller. The puller was still to long to fit in the gap so I attached the legs directly to the body with no link arms. Next I had to hold the compression spring in place with 2 small M5 screws. I had trouble lining the holes up. So I adjusted the speed handle some to be able to get the screws started. Once tighten, the speed handle was then opened to the maximum position. 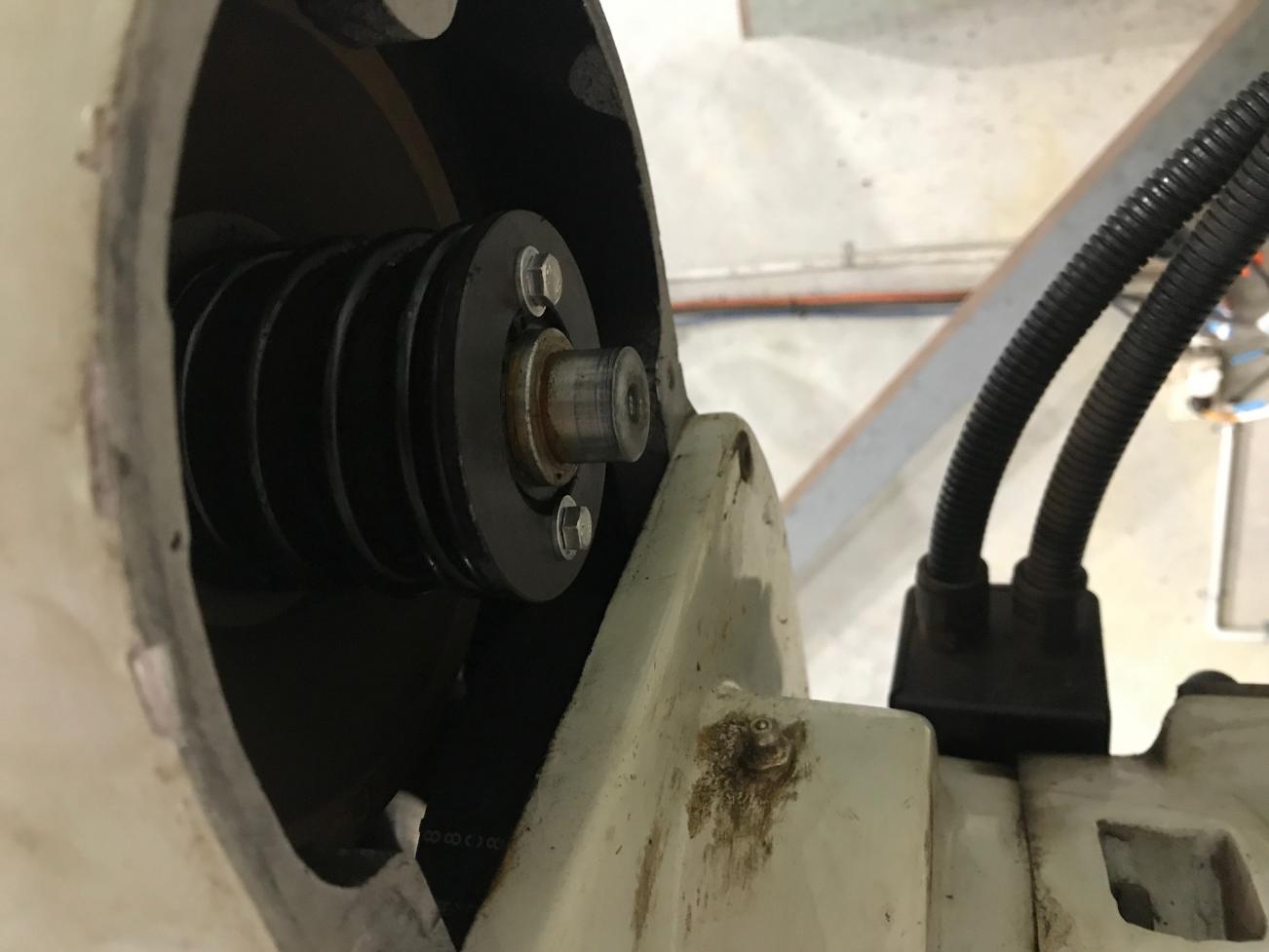 Removed the three electric motor bolts. With a platform ladder and a assistant helped removed the motor out on a angle to clear the drive belt. The motor is very heavy so I'm going to come up with a better way next time. Be careful, I ended up changing the screws out to M5 threaded rod cut 100 long. To release the compression spring tension slowly with the circlip removed. It wasn't ideal having to change one screw at a time. 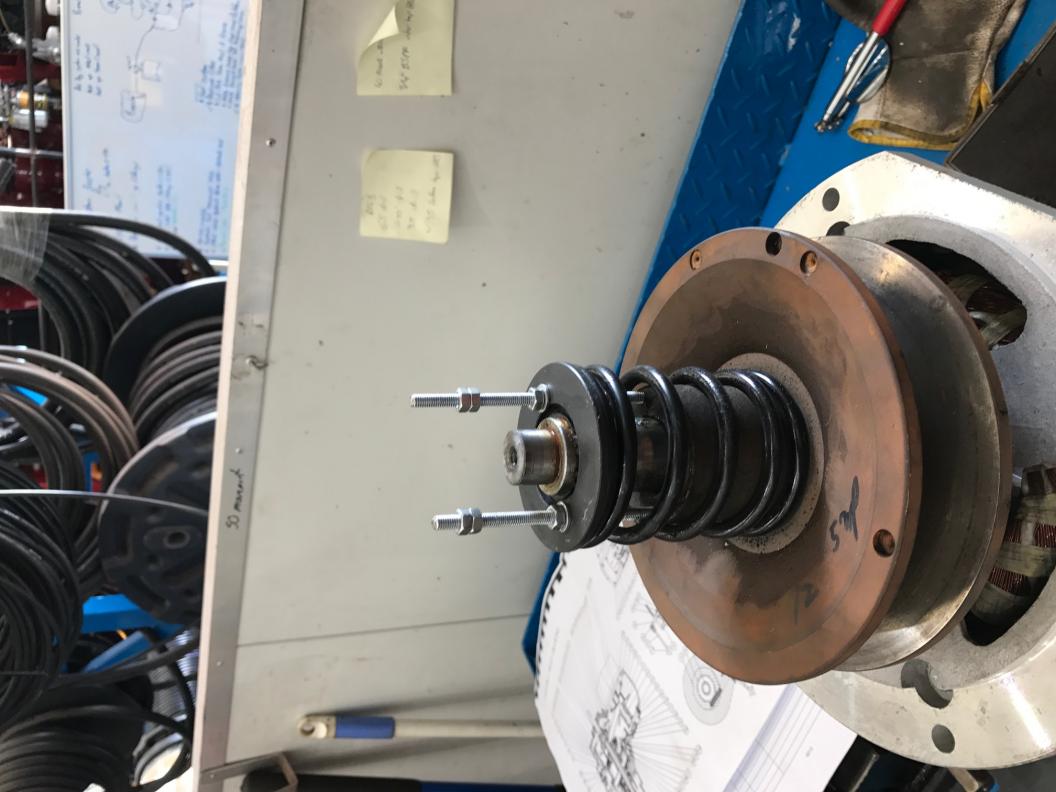 I then removed the top cover, three cap screws. 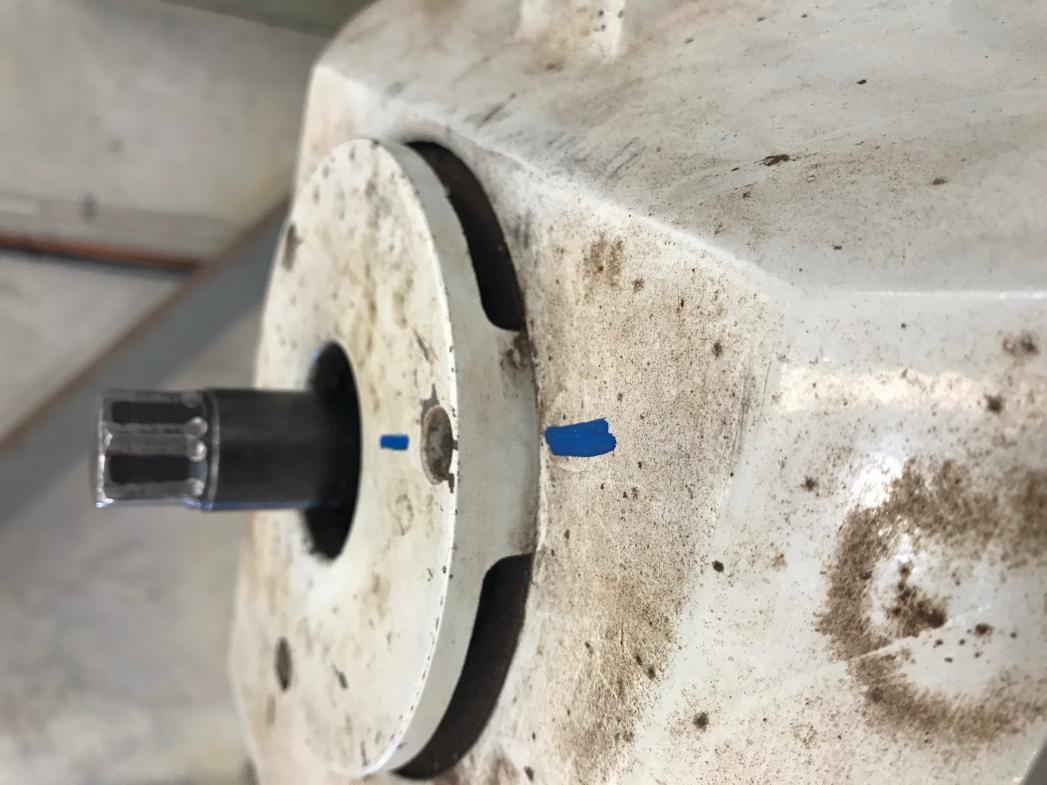 Under the top cover you have access to 2 small cap screws that hold the red part on in the photo, remove these. 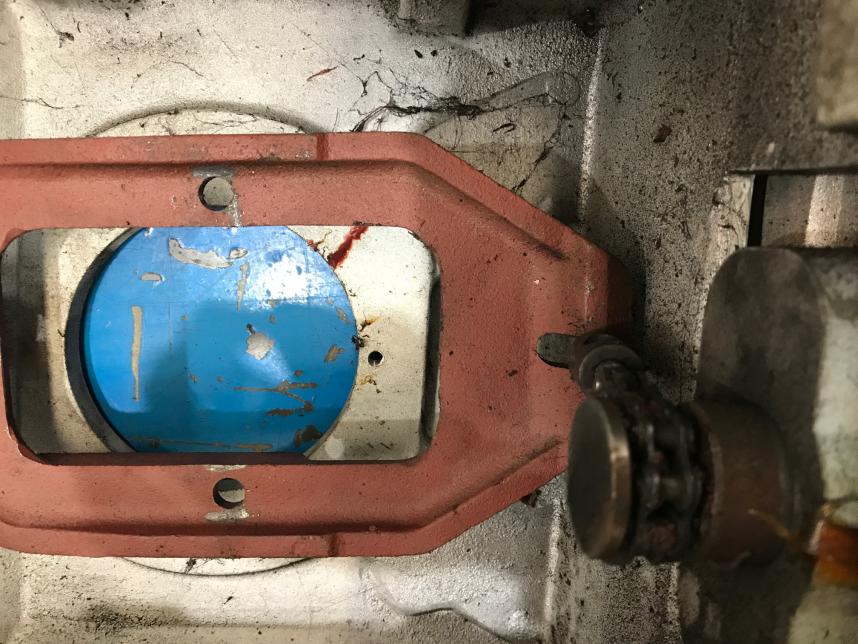 The screws that hold the top aluminium housing on are removed from underneath and it will lift straight off. The drive belt can now be removed.

Loosen the timing gear pulley with the help of applying the brake.
Next remove the cap screws that hold the brake assembly on, it will now wiggle of with the timing belt. 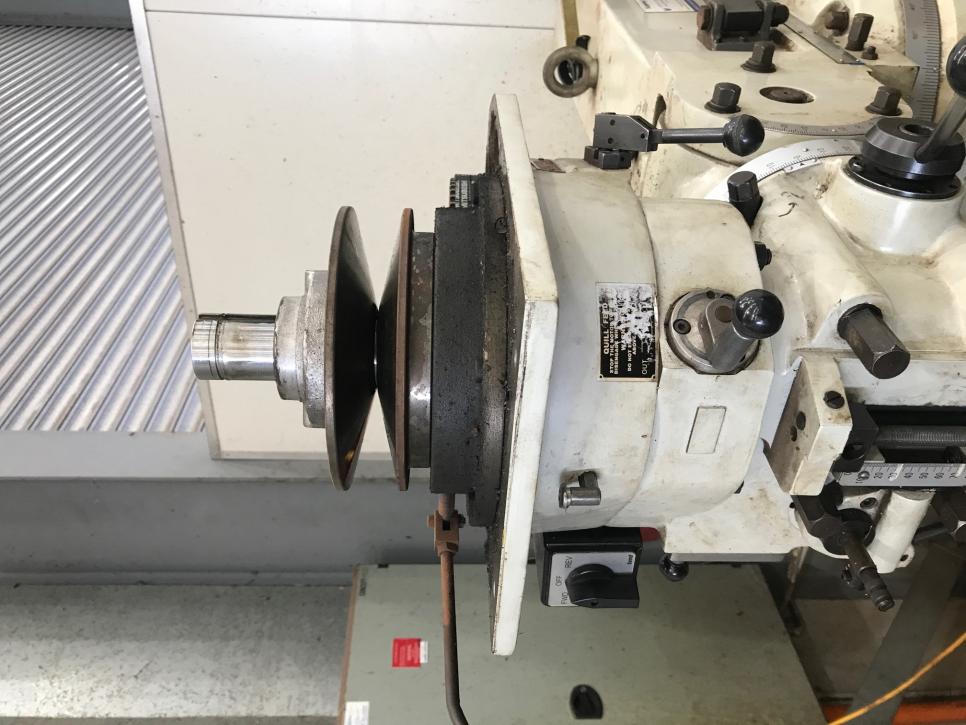 Next these two were removed, I required a three legged bearing puller to remove the gear from the counter shaft. 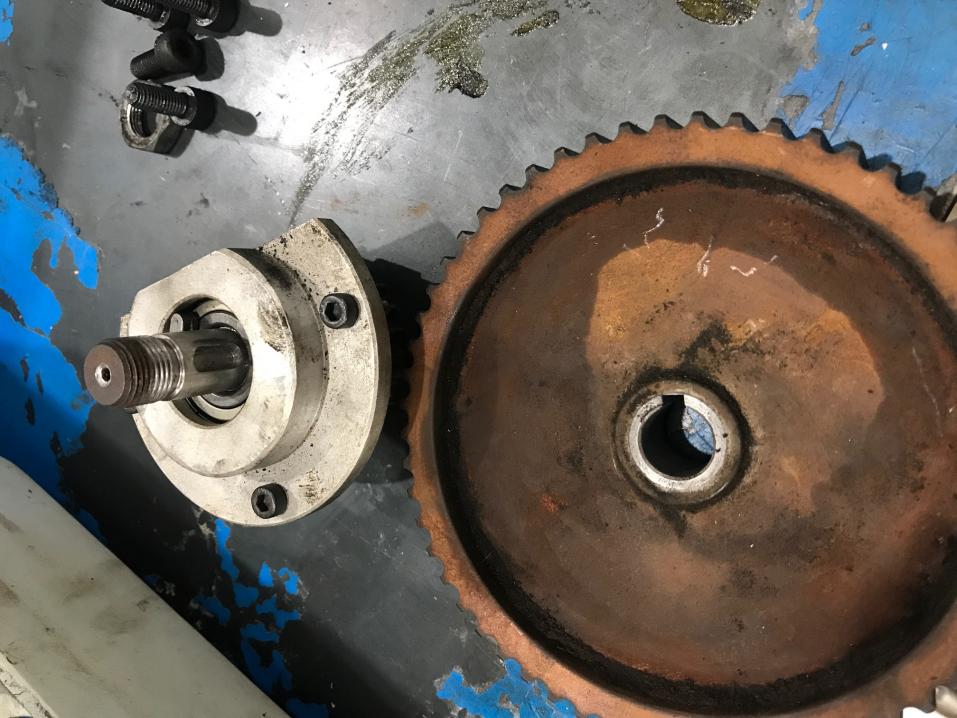 I noted the keyway in the countershaft was worn on one edge, and the cast iron timing gear was cracked around the keyway area.

The bearing in the brake housing is removed by unscrewing a threaded collar underneath and the bearing tapped out. 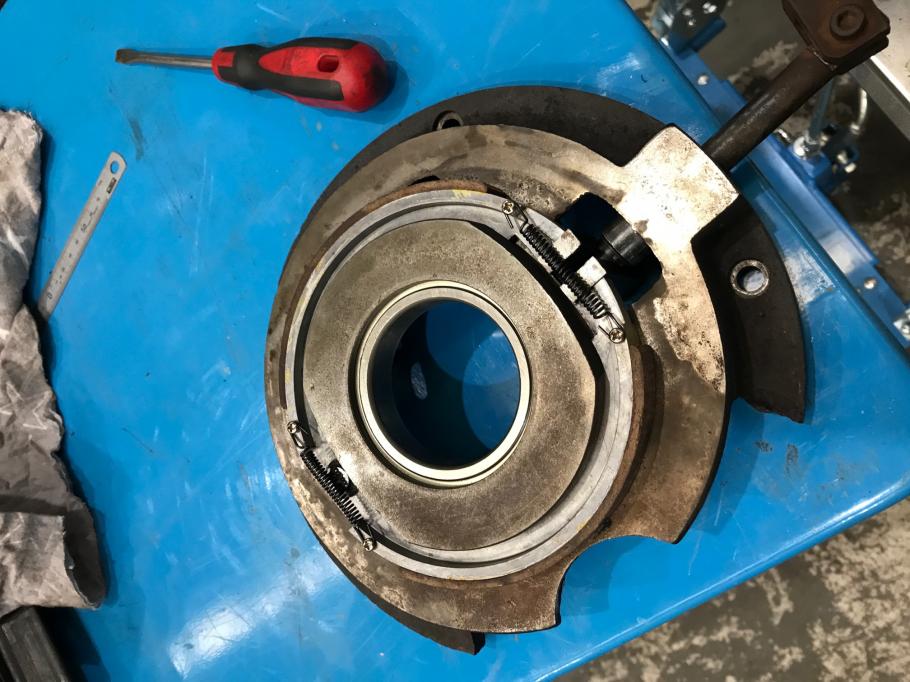 The aluminium housing managed to tap out easily with a recessed washer I had placed on top to tap. The bearing was then able to be removed with a drift placed on a piece of hollow bar. 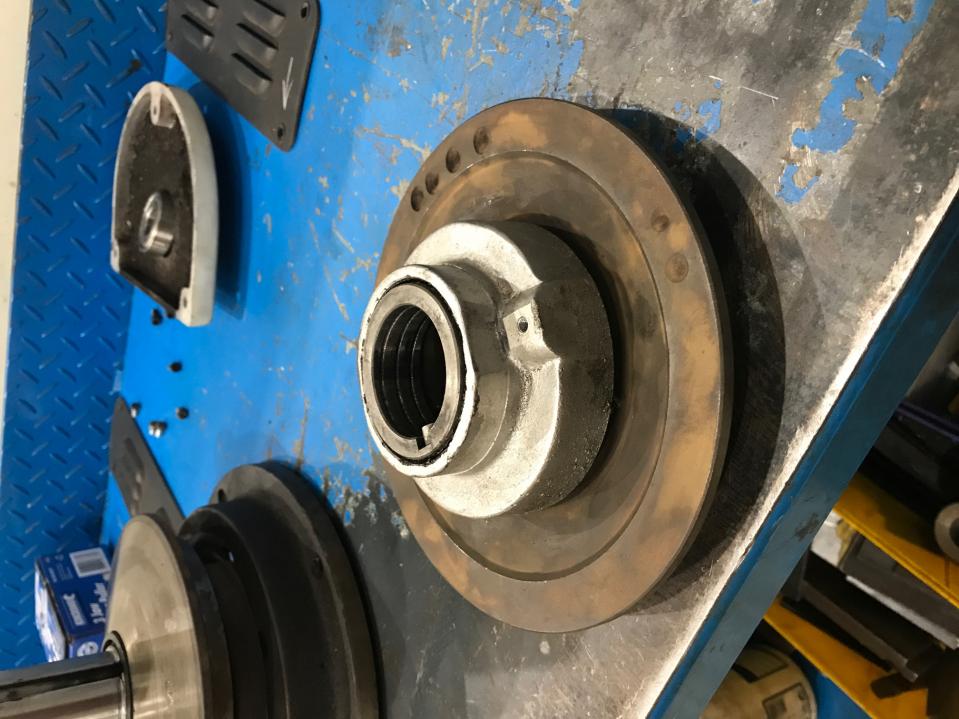 This is as far as I'm going to go. The main problem I noticed is the rear floating pulley did not float easily up and down the shaft and the machine would take a long time to get up to speed with the belt slippage noise added. The front pulley seamed to have a lot backlash in the adjusting speed handle, I will investigate to see how free the pulley moves up and down.

The machine it self is very close to a King Rich machine from a manual that was supplied to me from a dealer sometime ago.

Look to see if the key on the motor shaft has been sheered - topped off. The symptoms are lack of torque, RPM drop, and a floppy belt caused by the key damage that prevents the floating sheeve/pulley from sliding up and down the shaft as it should. 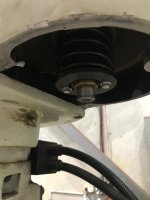 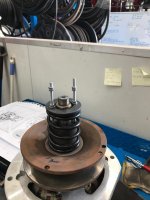 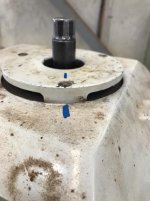 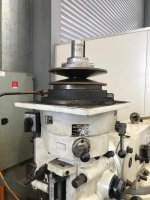 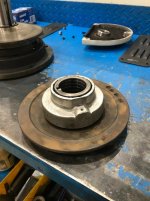 The timing pulley I'm not able to get from any suppliers here. I have tried getting a blank tooth pulley but can not obtain. I wanted to just make one from scratch but they want it now so I'll have to put a hub in it. The grey cast iron is 8mm thickness on the flat, I will have bore out the majority off it and place a M8 bolt hole pattern. The boss diameter can not be bigger as it will not fit in the machine. I'm just wondering if a normal bolt will do for this, or will I risk it coming loose? 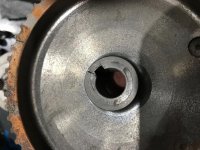 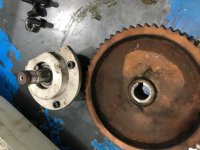 Here are some photos from the repair. The shaft I made from 1045 (for the timing pulley), the cast iron pulley was bored out and I placed the steel hub into it with m8 bolts and nordlock washers.
The assembly was fairly easy, I was not able to get a main drive belt replacement. It had less than 1mm wear on the width. The adjustment for the chain on the speed hand wheel was a fine assembly to tune, I made sure the little grub screw was pointing towards the front of the machine for access.
It was an interesting minor rebuild and it was interesting to see how the variable speed works. 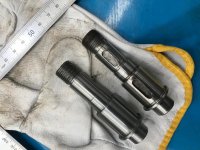 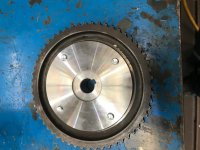 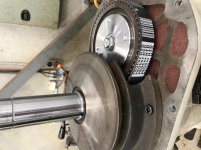 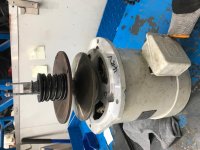