Cadillac 1428 vs Clausing Colchester VS12

Background: I'm an engineer by trade and a machinist at night. My shop is mostly for my own pleasure, but I'm not opposed to the occasional paying job. I'm currently renting space in a warehouse that is occupied by a bunch of creative folks, and I often help them with their projects. The space has crane, forklift, and 3-phase power. However, I'm currently 60 years old and as I get older I might want to move things home so I can putter around without having to drive 20 minutes each way.

I'm about to buy what I hope is my final lathe. The candidates are a Cadillac 1428 and a Clausing Colchester VS12. The Cadillac is literally twice the lathe of the Clausing/Colchester (2300 lbs vs 1170). In my current location the weight is an asset, but if I ever try to move it home to my basement it will be a definite liability.

For anyone not familiar with the Cadillac, it is a Taiwan made clone of a Mori-Seiki design. 14" swing by 28" between centers. Built in the mid 1970's. Manual and some parts are available from Webb Machine in California. This particular one has a D1-4 (or maybe D1-5) spindle, most were made with A-type spindles. Spindle bore is 1.53" (vs 1.37" for the Clausing). Six-speed (83-1800 RPM) all-geared headstock. It has a partial collet closer (drawtube, etc is present, but the spindle adapter sleeve is missing). Comes with a 10" 4-jaw chuck. No 3-jaw, no toolpost, no tailstock drill chuck. So I'll be spending a few hundred to a thousand dollars over the next months to get it properly tooled up.

The Clausing was made in England by Colchester in the mid 1980s. 12" swing by 40" between centers. It comes with a complete collet closer including the adapter sleeve and a bunch of 5C collets, an Aloris tool post, and a tailstock drill chuck. No 3-jaw or 4-jaw chucks. It has a Reeves variable speed drive with two geared speed ranges, 60-400 and 400-2500 RPM, but unlike some Clausings it doesn't have the troublesome hydraulic connection between the control handle and the vari-speed sheaves, instead there is an all-mechanical system of flex shaft, screw, and levers.

Neither can be run under power before purchase, but both have 30-day return options. I have inspected the Cadillac pretty closely and it looks pretty good. I will be looking at the Clausing early next week. Decision time will be immediately after I inspect the Clausing.

Advantage Cadillac: an industrial class machine, heavy and rigid. Even though it is from Taiwan, I suspect that the build quality is at least as good as the Clausing, and the design quality is better. Bigger swing, bigger spindle thru hole.

Advantage Clausing: longer bed, made in an English speaking country, manual written in English instead of Chinglish, possibly better support/parts. Cheaper by about $400, considerably more when considering cost of tooling (but I can spread tooling cost over time). Far easier to move into the basement if/when that time comes.

I suspect that if I ask the same question in a hobby forum they will say get the Clausing, while the majority on this forum will say Cadillac. I'm leaning pretty strongly Cadillac (and have put a deposit down on it) but I'm looking for input from people who have run either or both of those lathes.

I'd definitely agree with your preference for the Cadillac with one caveat, the short bed. wether it will be a drawback or not depends on the work you do, and what you might find yourself getting interested in.
the larger bore is almost a must have in my mind. since stepping up from a SB 10L to a 1.5+" , (and larger one also) bore, I wouldn't want to go back to anything smaller.
don't think you mentioned the spindle nose on the Clausing, but I wouldn't get a threaded spindle, go with a D1- spindle, and one of the common sizes is better, D1-4 or 6 preferred to a 5, as accessories are much easier to come by. for a 1.5+ bore its probably D1-4, but if it is a 5, well slight deduction for that.
as to weight, once you are humping 1100 pounds around, well what's another 1200? don't sweat that, lol!
D

I have a YAM 1440, same same as a Cadillac, good lathe, but getting it down a flight of stairs into a basement is a job I'd walk away from. If you have a walk-in basement it should be easy enough with some skates. No opinion or experience with a Clausing.
J

cyanidekid said:
don't think you mentioned the spindle nose on the Clausing, but I wouldn't get a threaded spindle, go with a D1- spindle, and one of the common sizes is better, D1-4 or 6 preferred to a 5, as accessories are much easier to come by. for a 1.5+ bore its probably D1-4, but if it is a 5, well slight deduction for that.
Click to expand...

I have a Cadillac 1422 with an A-5 spindle. As a kid we had a @tlas 12x36. As expected, the increase stiffness of the 1422 is a game changer on what you can machine and how fast. Most of what We fabricate is pretty short so the bed length works. Longer would be preferred but It can live with it. As you know, they are a little short so a lot of folks add spacers underneath to raise them. Hire riggers to move it and save your back.
G

Without knowing what work you do, it's hard to say. The 28" bed is pretty short....the tailstock and carriage will use up most of that.

But....those wacky northerners and their f'ing basements....no way would I trundle either on of those lathes downstairs. Basements are good for growing mold, collecting groundwater, and the usual and various manifestations of sexual deviancy. No place for machining.
J

GregSY said:
Without knowing what work you do, it's hard to say. The 28" bed is pretty short....the tailstock and carriage will use up most of that.
Click to expand...

It's not a 28" bed, it is 28" between centers. So the tailstock is already accounted for. Yes, the 40" version would be nicer, but you gotta take what you can get.


GregSY said:
But....those wacky northerners and their f'ing basements....no way would I trundle either on of those lathes downstairs. Basements are good for growing mold, collecting groundwater, and the usual and various manifestations of sexual deviancy. No place for machining.
Click to expand...

My basement is dry. Yes, in a perfect world I would have a shop at ground level with heat and cooling and all the rest. But in this climate, I'll take a basement over an detached garage or other outbuilding any day. The cost to heat an outbuilding is extreme, and the temperature changes wreak havoc on machines due to condensation, etc.
G

Both are too small.

Add a platform elevator to your basement and get real machines.
A 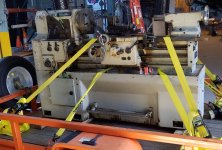 You made the right choice, we have a Mori Seiki just like the Cadilac you bought, and it's a beast!

well congrats! looks like there is a toolpost after all, but it looks unusual to me, what with the side lever. fill us in on that. from the pic, it does look like a D1-5, not that terrible, lol! let us know what that is also. happy and safe turning, cheers!
J

cyanidekid said:
well congrats! looks like there is a toolpost after all, but it looks unusual to me, what with the side lever. fill us in on that. from the pic, it does look like a D1-5, not that terrible, lol! let us know what that is also. happy and safe turning, cheers!
Click to expand...

The chuck says "Made in Poland" and seems pretty nice. I don't see a Bison logo, not sure who else makes chucks in Poland.

The toolpost is a FIMS. Made in New Jersey. I've not had much luck finding any info about it. It has dovetails on three sides, which could be handy if turning close to the tailstock or something. The dovetails pull inwards toward the flat sides to clamp the toolholders. The label is damaged so I can't tell what size it is. Just like Aloris etc, they made several sizes, at least 1 thru 4. Mine is about 3-1/4" square (not counting the dovetails) and 3-1/4" tall, but I haven't found a magic decoder ring to tell what number that is. There are a very few toolholders on eBay, but nothing that I can confirm would fit this post.

oof, Toolposts made in NJ? haha just kidding! some of my best friends are from Jerz...

Toolmex is the other major Polish chuck builder.
You must log in or register to reply here.