cast iron or steel - gears on an old lathe

That's news to me. Ever hear of magnesium?
B

Thank you for the information! I did contact Grizzly and was told that they did not have any parts for it, but I'll add your information to the file. Yes, the "banjo" piece is not missing, just needed to take it off to get the gears off - they were warmed and pressed out. Based on your, dgfoster, and others recommendations, I am strongly leaning towards ductile iron casting.
B

Probably a dumb question but.... why?

Maybe this is where the choices of shaving, shaping, hobbing or grinding come in?
E

b.rett said:
Maybe this is where the choices of shaving, shaping, hobbing or grinding come in?
Click to expand...

Space cutter and a dividing head is good enough for these, actually.
M

Here's how I did

DMF_TomB said:
malleable iron is heat treated cast iron. Chinese had it easily 2000 years ago.
.
belt buckles, , pipe fittings, C clamps and many many other items were made from malleable iron long before ductile iron was invented discovered. even regular grey cast iron comes in different grades. the stronger it is the harder to machine.
.
lathe gears hard to say what made out off. i have seen zamak or zinc aluminum alloys too. even seen plastic gears on really cheap stuff. of course a high strength heat treated steel is sometimes used for gears too
Click to expand...

My chinese lathe, a Victor (But made in the PRC!) had fixed compound change gears made with two slightly different foreign tooth forms*, I'd never even heard of such a thing (Still don't know why they did that) and ran one against the other because, yes, they were that close to the same.
I machined off the teeth, made a brass ring which I pressed on and fixed to the hub with setscrews running between the brass/steel press line like keys, four of them, then sent the gear to my favorite gear cutter with another gear with the correct tooth form and they cut it. That was at least 15 years ago and it still shows no wear, looks funny, guess I could blacken the brass,,,,

*Probably module? they looked almost identical and appeared to run together, which they did for about 10 minutes!

What am I looking at here?

10 fingers said:
We manufacture thousands of new change gears annually. Both as specials and sets for machines we build. For typical applications gray iron bar is ideal. If using steel, gears must have lubrication.
Click to expand...

How amazingly appropriate that your "metal type" is Cast Iron! This will soon be ruined when you reach 500 posts. Too bad!
B 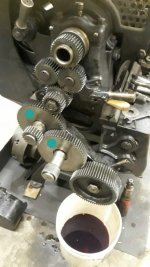 Just for the sake of completeness... I wanted to upload a pic of the two new gears (Rush, ~$700) that allowed the lathe to be fixed. They are not dished out and I considered doing that myself but... Anyway, they are Durabar 80-55-06, run quiet and look nearly identical.

Thanks to the community and those that offered advice. Sorry for the very late follow-up!

Yan Wo said:
What am I looking at here?
Click to expand...

Tooth implants.
You must log in or register to reply here.

Jan 1, 2021
AJFF
A
L
Waht type of metal are Sunnen truing sleeves made out of?

Southbend 9 A - zero torque except on back gears! Can hardly run a 19 thou cut
2