So inspecting the spindle, I don't think the problem will adjust away. It doesn't behave like it has enough backlash to match the amount of crunch I'm hearing. I think either some abrasive debris got into the bearings, or they were run at full speed without getting enough lubrication, but there's definitely something wrong with them. That said, I'm purchasing bearings and plan to thoroughly flush out the gearbox while it's open so the splash lubrication will do it's job. I also want to get in the habit of running it at a lower speed for a few minutes before shifting into high gear. Since I've run the mill, I've used 46 weight Hydraulic Oil (Mobil DTE 25 Medium)
everywhere but the vertical screw which uses medium way oil (Mobil Vactra #2), and a light non detergent motor oil for stuff like handles and bare surfaces.

Now, back to bearing numbers: I need x2 Timken 598W (cone +inner race), and x2 Timken 592B (outer race with flange). Those numbers don't seem to have any bearing on the class of the bearing and it will have an additional number somewhere on the box for class, if anything. Most seem to be Class 2 or Class 3, but I've seen them as low-grade as Class 6

Prices on these have gone way up. From actual bearing supply companies, the cheap bearings that were $98 5 years ago are now $400, so I'm looking at new-old-stock stuff on eBay and the like to try to fill the holes. I already bought one new-old-stock Class 3 set that included both the inner and outer pieces. Hoping it'll be here next week.

592B is a flanged cup - fits in a 6" bore.. Many flanged cups are "B", but not all. All the precision class I have ever seen were manually scrawled with electro marking devices.
Cones used by CMM will often have face keyways to control rotary movement in relation to spindle
Last edited: Jun 10, 2022
T

We’re talking milling machine spindles here. We’re not necessarily looking for bearings that will generate top class finishes as you would on a lathe or Hor bore. It’s about what will enable you to remove metal and give a reasonable finish.
Certainly with a machine that will run now and again and the bearing prices what they are.

I don’t know what’s happened to “ Timken “. They were once a blue chip company known the World over. Even in my time in engineering I was put off buying machines that had “ Timken “ bearings in them because you were never sure you could get replacements. Loads of high class machine tool bearings that they’d made previously were “ no longer available “.

I’ve even gone to the trouble of buying some of their bearings that I didn’t need at the time, on a just in case theory !

I remember back in the 1970's and 1980's, the heavy machine tools we had in the shop, we kept a stock of Timken bearings for those that had a one to two year back order on. And they were class 3 bearings! Of course, they were big bearings, they were something like 16" ID x 21" OD EE series Timken bearings. Five grand a set back then, can't even imagine what they would cost today.
Last edited: Jun 13, 2022

One of the nice things about Drilco is Harvey Benoit fixed me up with the two volume set from Timken Engineering. Still use them although I'll assume a lot of the stuff is simply no longer available


Heavy Iron Being Built In Houston in 1975

This is heavy, and is USA, so I elected to put it in this section Page two mentions folks - Ralph Stokley is Ken's (4GSR) dad. Charlie Elder founded Boring Specialties, that both Ken and I worked for briefly. Duane Wolfe and Harvey Benoit were Drilco folks that hired me in the fall of 1974...
www.practicalmachinist.com

About 10 years ago ,Timken changed their policy of suppling obsolete bearings,to just no.........but even before that ,seemingly simple bearings like a motorbike wheel bearing taper roller could be $300,which generally meant time wasted answering the enquiry.
R

Thanks for the tip! If they were closer, I wouldn't be against buying it for parts and pulling the spindle bearings out of it, but I doubt he'd be interested in doing that. I sent him an email to see if he'll pull some exterior pieces off.

I'd be interested in finding a 'B" style thru-bearing arbor support (have two of the 'A' style nipple-bearing already), and an original drum switch and cover plate (mine's home made), and the 6" cast iron ring that holds the screen at the base of the coolant return pipe as mine has a piece broken out of it.
R

I would have said a couple of years ago it may be worth the drive, but I think we all know the answer to that one nowadays. I do have a picture he sent me, but if you've emailed him he can send you the picture too. And I just saw it in his shed just a few weeks ago but that was before I saw your posts here. Mike
R 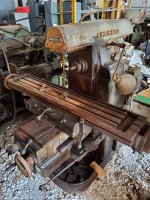 Hey I was able to upload it in pretty easy. Mike

Unfortunately that generation's a bit different than mine. Thanks for the lead though! 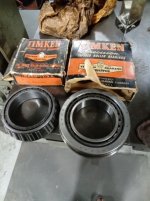 My first bargain bearings arrived. The one on the right is a new-old-stock 592B flanged race, which happened to include a 598 cone (with no letter). The one on the left is a used 598 cone (with no letter), but at $8 It was a worthwhile gamble IMO. Worst case it's something I can measure and play with. The rolling elements appear to be in good shape with the only visible or tactile wear being a wear ring on the back face. It had a fair amount of shelf rust, but it cleaned up with a evapo-rust bath and oil. Still have another outer race and another cone inbound. The inner cone's are 598's not 598W's which I'll compare dimensionally to the old bearings when the spindle comes apart.

Also learned that SKF and NSK make/made these bearings as well under the same numbers, so expanding the search there as well.
You must log in or register to reply here.