Hello all, I am restoring a 1968 - 1969 Clausing Colchester Mk.2 Master lathe and am in need of a few replacement parts. Clausing wants an obscene amount of money for a half nut and thread dial gear. Now, Before I break down and make new ones, does anyone happen to have these in good condition they'd be willing to sell for a reasonable price? The factory part numbers are 7712 (Leadscrew Half-Nut (Standard)) and 7602 (Dial Indicator Gear, 24T). Thank you in advance! 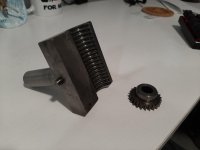 You might as well make the nut,youll never find a used one thats servicable.......making the 24 t wheel is easy,doesnt need to be any particular thread form ,just needs to turn the indicator........Incidentally,the leadscrew will need attention too,cheapest fix is to reverse it with a cut and shut.
P

Those would be easy to make as suggested. I had needed some clutch parts for a 15” triumph and contacted Clausing and dam near fell over. $2200 for a clutch hub piece and a roller. I checked two used sources here in the states and they both laughed and asked if I had checked with Clausing and told me they’d sell for half that. When I told them I contacted Colchester Spares in the UK and they’d ship to the door both parts for a little over $600 they weren’t laughing so hard. I almost got the pieces from Colchester Spares as it was reasonable but Luckily I found an old thread here on PM of someone parting a lathe and they still had what I needed and got the whole clutch shaft and assembly for $300. Come to think of it I may have the whole thread dial for your lathe. I’ll do some digging and let you know.
T

I used to recommend “ Nobilla “ in Stevenage in the UK for “ Colchester “ spares. I thought they were very good and reasonable price wise. They sold both new and pre owned spares. However the last time I mentioned them someone commented that they were no longer as cheap as they used to be.

You can use Moglice epoxy or another to repair what you have while you machine or acquire another part.
Link: Now a days you can replace the clutch system with a drive system and VFD controller.
Link to
I have a CC student VS-13 or/ 3100 No clutch put I am impressed by how good the machine runs. Adding a DRO to it this week.

The wear on the threads of your half nut shows evidence of
the nut cocking sideways. It will rotate on the support shaft.
This is a very poor design. Most lathes put the half nut or nuts
on dovetail or boxed slides. My Colchester had a little cast iron
bracket where the half nut was supposed to bear on, preventing
the rotation on the shaft, as it travel linear up and down.
My bracket was not made properly at the factory. The side of
my half nut never even touched the iron bracket. I ended up
soft soldering a brass shim plate on the iron bracket, sweat it
on there, as they call it. Tip: the lead-free plumbers solder has
1/2 of a % silver in it, the rest is tin. This seems to stick well to
cast iron, better than 50-50 or 60-40 tin-lead solder.
Anyhow, before I fixed the clearance with the shim plate,
(which was like .050"), the half nuts were not free operating.
They would drag and almost bind up. After I had the apron
in my parts cleaner tank, and removed all the oil and grease,
the half nut lever would NOT operate. It needed the grease
to be able to move, the design bound up so bad. After the
shim fix it was a lot better. But the one thing I also did, was
drill and tap the apron for a 1/8" pipe nipple (about 5" long)
that fed oil from a Gits cup, directly into the female bore in
the apron, there the support rod for the half nut travels.
The 1/8" pipe has only a little bit of clearance with the big
gear in the apron, but it fits. Now I have an oil cup on the
front of the apron that feeds this half nut slide directly.
And with the proper fitting support bracket, my half nut moves
like a dream. You might want to do a little engineering investigation
homework before you just throw parts at your lathe.
Colchester absolutely did NOT get the design right on this thing.
They designed it with economy in mind, not elegant engineering.
Your half nut does not look impossibly bad. My advice is just
check out what you have first instead of assuming you will be
buying a solution by throwing new parts at it.

Give Wedin International a call. They may have something close that can be modded or make it for you maybe for less.
You must log in or register to reply here.