I recently squired a Brown & Sharper Micromaster 510 that seem to have most of the guard in place to run flood coolant but it is missing the coolant tank and pump. I feel that I need to at least try flood coolant. 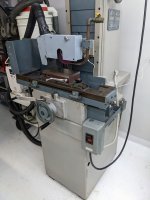 A other option would be a 5 gallon bucket with a pump it in ? Some people recommend a aquarium pump, would a submersible utility pump not be a better fit ? What GPH should I be looking for ?

There is also the question of filtration. Do I need baffle to prevent sucking the grit ? It is worth having a filter bag on the return path ? How fast is it gonna clog up ? What particle size ?

Then there is the question of what coolant. I am looking for a suggestion for a coolant that I could use on this grinder but also my lathe. My priority is rust protection and odor, I don't really care about performance. This is for my home shop and I might go months without seeing any use. I also want something I can order online easily in Canada without having to talk to a salesman !

I looking forward to hear what are some of yours experience on the subject.

I have seen a "kit" that is basically a 5 gallon pail with a pump attached to the lid. I don't remember what brand it was, I want to say Dayton, but could be wrong. I can't seem to find it online so I don't know if it was something specific to our industrial supply distributor?

We had a few for running oil to some drilling machines. It seemed to be a pretty solid setup, we rarely had problems with it. The chips were from drilling small diameter holes and were not as fine as grinding swarf, but still rather small and damaging to the wrong kind of pump.

This kit had a somewhat fine wire mesh to catch the larger stuff in the return, but there weren't any really fine filters on the pump.

In fact, the only issue we routinely had was chips and lint from the rags would plug up the nozzle and we'd have to clear it out every now and then. So that means the pump was just sucking up whatever was floating around in there. Still worked for years at a time.

Whether or not Grainger is your preferred supplier or not, that is along the line of stuff you are looking for. The Dayton ones are pricey, but if they are what we had at that shop, well worth the money as they went forever it seems. And if you are only using occasionally, you might not have to replace it in your lifetime.

A submersible aquarium pump is the berries for the home shop grinder, and good/safe for dumping on the grass coolant.
Coolant mix = A 5-gallon bucket of water and a cup of washing soda,(not baking soda) the coolant hose is close to and faces your wheel with a simple valve to adjust flow. Parts will come out very clean so an oil wipe is due.
The spark stop can be replaced with a box fab extending another 12" away and having a deflecting angle down so sparks go into a bucket or simple catch.
*Brown & Sharpe Micromaster is one of the world's top grinders IMHO.

QT OP: but coolant also for my lathe? Not. You might buy some coolant that might get into the lathe works and not cause harm. I just brush on for one-up jobs.
.
looks like your grinder needs a back rail. you can male one with a strip of angle iron (steel), Ground flat on the inside. use high-grade new bolts that go to almost full depth of threads, and tighten with only two fingers push about 3 to 4" out.

Oh. and your title should have included the word "grinder"

I think it is good to Jog start a grinder spindle so start to about half speed, let run down, and then fire up. A grinder setting for weeks or in a no-heat shop hand spin a couple of times then jog start,

Basic tooling:
A bargain brand set of 123 blocks
An angle plate
a V block with clamp
Two 6" light duty C clamps
A 15* diamond dresser you can make with a rectangle of CRS.
Block-in blocks of most any size
Measuring devices
Good to have a way to fix an indicator to your guard.
Note, two clamps to a 123 block beats any vise.

I like to have /make a simple plate 1/2 to 3/4 thick about 6 x 12" square that functions as a bench surface plate and gauge plate, with it having a couple of threaded holes so you might bole something to it (like an indicator or what).. and it being dead square so you might even use it for a fixture or square checking device, or a right 90* off your back rail so you might be straight/square off the front of a part when needed..
Last edited: Aug 5, 2022

For a coolant recommendation, typically synthetic coolants can provide a long sump life but water quality is very important to maintain that ability to go months without use.
You must log in or register to reply here.