I put the numbers best I could into my MITcalc gear software. 11 tooth 20 PA pinion with a center distance of 12mm (which is what a 12 tooth with no addendum mod would be at). The OD comes out to 28.01mm when I do the the addendum mod required to put an 11 tooth pinion on the 12mm center distance. I have attached a PDF and a DWG file of the gear but don't have a way of checking the dwg file on this computer. It looks like you could hand grind a single tooth cutter as the undercut appears very small. I am no gear expert, just trying to help. 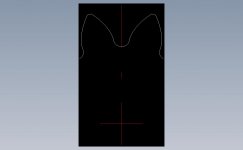 EmanuelGoldstein said:
Downloaded it, didn't work. Once upon a time places would list the basic requirements for software, so you could avoid wasting your time getting it if you knew it wasn't going to work.

It should've worked. What's your OS?

Ah. I finally gave up and started using Win10.

It aught to run fine on XP, though.

With the help and guidance on this thread, I was able to do more research online. And I made my own observations/measurements. And while I still have zero documentation on the Voest, I do now believe Voest* would have followed industry standards, more or less. That means I think the PD is is 24MM, as I have found several references that indicate it is a common value.

I found a place in the USA that sells pre-made gears, fairly cheap, so I ordered two that are Mod 2 12 tooth, 20PA, 24MM PD and I will give them a try with the a high degree of confidence. I do agree an 11 tooth would be better but no one seems to make that.


*This Voest drill appears to be 'ancient' yet the few references I find online indicate they were made in the 1975 era. That's not really too old. Pre-CNC but not by much. That might explain why so few are around. Plus, I bet they were super costly.
G

So....I pulled the head out of the horizontal column, and split the 'internal' ram away from the head. It turns out the Voest uses all of the gears in the head to drive the downfeeds and the two main spindle speed ranges (hi/Low). The 4 speeds that exist within the Hi/Low are a separate gearbox that exists within the internal ram. Basically, they send the motor power into the 4 speed gearbox which has a sole output pinion that drives the head.

As I knew, 2 of the 4 gears work, and two don't. In order to find out why, I'll have to split the gearbox and look inside.

Another bit of learning...the drill uses gear oil, I'm guessing GL-5 90W. It looks like it holds a few gallons, not just a few quarts. But, another shaky design feature is they run the 240V leads through the oil reservoir....they spend their life submersed in oil. They had a basic 'shrink sleeve' type jacket but that cracked long ago and oil was wicking into the switch box. In fact, the bottom 20% of the switch box is below the top of the oil level so it'll take on oil as soon as the jacket starts leaking. Jeez. One solution would be to relocate the switches so the leads don't run through the column or oil, though that starts to get clunky. 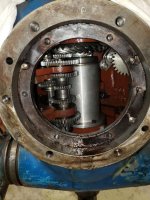 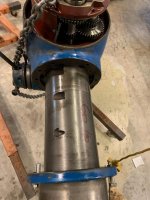 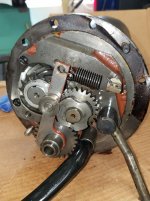 Took the gearbox apart. The offender? The shift rail is a two piece affair. Gears 3 and 4 slide on an auxiliary rail that rides on the main rail. It was free as could be. But the main rail (red arrow) was frozen solid. I spent a good half hour working it and it moves now, but not like it should. It has a free are but get tighter as it slides rearward.

I haven't determined yet if it's a bad bushing or a bent shaft. If it's bent, it's not much. But I can't see how the shaft could bend and all of the forces on are axial. Even if you tried shifting while running under power, it would grind gear teeth but not put any radial force on the shaft.

I just can't imagine the cost of producing this drill. It's a ton of complex parts and machining. If this were something made in the hundreds of thousands, I could see it. But they couldn't have sold many. 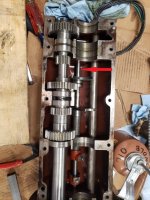 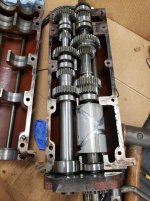 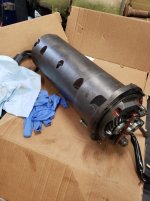 If I was looking for 11/12/13 tooth pinion ,I would be looking through my collection of starter motor pinions....many are metric ,and about the module size you want......Actual first port of call would be CAV/Lucas CA45 starter pinions,then Bosch starters off Deutz or maybe John Deere.

If my copies of XP weren't on IDE drives, I'd try one to see if that software works.

I used WinXP, till I got a Win8 (not 8.1) computer. Funny thing about 8.1... They pushed it and pushed it..."Free Upgrade!" Woohoo! I spent hours TRYING to download it on my legitimate OEM copy of Win8 on my ASUS laptop with the OEM hard drive, then get an error. Wouldn't work. Did this multiple times till I gave up. Win8 worked fine for me. When I bought my last laptop, I considered running Win8, just cause I was used to it. Ended up taking the easier (and probably more sensible) route of running Win10.
You must log in or register to reply here.

"Correct" gear cutter does not match gear profile (What did I do wrong?)