Bolt action rifles normally use raceways, large grooves in the sides where the projecting bolt locking lugs ride when the bolt is opened. The original designers and manufacturers used large dedicated machinery and long broaches to cut the raceways. It was cheap and fast for production work.

Cutting the raceways without big specialized equipment is awkward. Some people have modified commercial broaches to make the basic cuts, then used files to round the sides as needed. Others have used EDM. A few have used shapers.

A while ago I had another idea. (probably thousands of others have had the same idea...) You have a hole through a tube, and you want to put grooves in the sides of it.

Gee, where have we seen that before...?

I was sketching away when I'd realized I had just reinvented hook rifling.

Form the radiis of the outside of the raceway onto a piece of lathe bit, use a wedge and screw to adjust it, and take .001 or whatever cut would work per pass.

My air-over-hydraulic press doesn't have quite enough stroke, but I realized it should be practical to cut by hand, like the slotter attachments available for some older manual lathes. Bore and hone the ID of the receiver for a close fit for the broach bar, use a couple of links to keep the operating lever from putting a side load on the broach, and go to town. A .200" raceway in .001" cuts would be 200 strokes, times two for both sides, which sounds excessive... but loading a box of 50 cartridges takes 400 strokes on my O press, and I'll load a lot more than that at a single sitting.

"I love it when a plan comes together."
A

Is it "Great minds think alike" or "fools seldom differ"

shapers are pretty inexpensive in some area's, that is what I have used.
B

I had rather pay $150 to have a good EDM job done. I have done a lot of shaper work and just wouldn't go through the trouble to prove that I did it. I do have broaches for race ways.
Butch

I think if you research cut rifling a little more, you will find that the cutter is advanced more like .0001" per advance, which would throw another factor of 10 into your calculation. And you have to consider that the width of the widest rifling groove (e.g., .50 cal, 4 grooves to maximize it) is perhaps only about 3/16" and most barrels these days have more than 4 grooves.

Not to say it can't work but it is a lot more work than you currently think. :-)
D

The squirrels are busy this morning. I just wondered why you couldn't do the receiver in two concentric tubes - an outer, and then sections of an inner tube to form the raceways.

The inner pieces would carry the bolt thrust, but they could be attached by rosette welds, threaded or riveted fasteners, or even brazing. There would be a lot of area to play with.

Bore and hone the ID of each tube, turn the OD of the inner as needed, attach them together, and then make your magazine and other cuts as needed.

If you wanted an "inner receiver collar" like the 98 Mauser, you'd just start with a thicker outer tube.
D

Elimination of the broaching hassle may be why we see so many newer designs are "fat bolt", with the lugs not extending past the oversized bolt body. The clearance cutouts for the lugs to pass through the receiver are short.


I'm planning the rifle as a fun project, not production. If I sink too much into one-toy-only tooling, the fun-to-expense ratio drops below what I'm willing to pay.
C

There was a very nice article in Home Shop Machinist Magazine about 10 years ago. Someone made a very nice adjustable tool for a shaper that cut on the grooves. Perhaps a reprint is still available or someone here has an old collection.

I never wanted to do that so I dont think I kept that issue...

Otteson gave a written description of the home built machine which Ralph Stolle used for cutting the raceways in his actions.

I could not visualise it,
Could anyone here explain it?

Not to say it can't work but it is a lot more work than you currently think. :-)
Click to expand...

I don't think anyone here's thinking of doing it for a living, but I don't see why a much heavier cut shouldn't be used, assuming that there is enough force available to move the tool, I think a lot of the reason for the light cut in rifling is to get the best possible finish, I gather that military armories in the days of cut rifling used much heavier cuts than todays premium barrel makers do, and achieved a finish adequate for military use, plus that high standard of finish isn't anywhere near as important for raceways.

Even using a shaper or slotter as the power source, the use of a rifling style cutter box the full diameter of the bolt way will provide support a lot closer to the cut than a long extension mounted to the clapper box and skinny enough to allow table feed to advance the tool would

Adding a finger wheel to automatically advance the cutter on each stroke, like on some of the home shop boring and facing heads, would make it a lot faster operation than twiddling it by hand each time.

Instead of the full length raceways, why not consider the full diameter bolt with only the front end cut for the locking lugs? The Hall two lug actions are made this way and are very successful, and the newer three lug BAT's are as well. Might save some time.

I do believe it's time to revisit the Remington 788
T

If I had the time and the engineering know-how, I'd build a straight-pull receiver-bolt designed along the lines of the Savage Impulse. Waiting to get my hands on one...
K

kopcicle said:
I do believe it's time to revisit the Remington 788
Click to expand...

Okay , quoting my own post is a bit tacky but for those that didn't get the reference the Remington 788 is a rear of the bolt locking element akin to a 60 degree interrupted thread. It has no raceways. Curiously it was discontinued amid good popularity and sales. I've owned several and found them to be as reliable and accurate at their price point as any other rifle. The rumor was that is was discontinued because of it's popularity! Seems buyers were drawn to it more so than Remington's other more expensive (profitable?) models. Just a rumor. 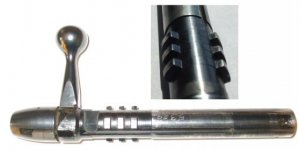 kopcicle said:
Okay , quoting my own post is a bit tacky but for those that didn't get the reference the Remington 788 is a rear of the bolt locking element akin to a 60 degree interrupted thread. It has no raceways. Curiously it was discontinued amid good popularity and sales. I've owned several and found them to be as reliable and accurate at their price point as any other rifle. The rumor was that is was discontinued because of it's popularity! Seems buyers were drawn to it more so than Remington's other more expensive (profitable?) models. Just a rumor.View attachment 347732
Click to expand...

I have also heard rumors that it was discontinued because it was more accurate than the M700 due in part to a faster lock time.
W

788 is basically the same as the 541 rimfire. Or vise-versa. Not really much simpler, if at all. Needs 'races' cut for the bolt lugs to pass though. Just from the back, and blind. Not a broaching operation, which would be straight forward but big money for tooling. Maybe could be hammer forged? Sauer 'whatever model' with lugs in the barrel is another option. But a nightmare to rebarrel, like a K-31. Both get the 'stub' bored and threaded for a new barrel. Not much meat on the Sauer with it's 27mm (1-1/16") OD. I did a 27/32-20, splitting the difference from an AR.

He died from natural causes, so I guess it held up.
A

MilGunsmith said:
I have also heard rumors that it was discontinued because it was more accurate than the M700 due in part to a faster lock time.
Click to expand...

IDK if thats why it was but we had a guy that shot one in 30-30 for reduced course xtc competition as a joke and won. He then started shooting it more that just our "fun" match. Very accurate right out of the box.

They are pretty accurate but the magazines hold too few rounds.
D

I a lot of guys talk about cutting lugways.
Few actually do it.
Did the OPer? Or is his plan still a plan in his daydreams?

Broaching a Bolt Action Reciever, Raceways, Lugways, ya someone had to do it.

I have wanted to do this for years. And every couple of years I do a search on it in all the usual gunsmithing forums and nothing, a big fat nothing burger. NO MEAT, all air bun! Oh there are posts on the topic with lots of ideas and suggestions, including some very wacky ideas but no real...
www.practicalmachinist.com

You can also buy 700 blanks cheap.

1st off, no connection, no compensation, yada yada. I saw these a while back and finally got around to ordering three. Bolt Action Receiver Extrusion Blanks | SATERN(R) Barrels Received them today and I am impressed. The bores on mine will barely allow a stock Rem bolt in the bore and lugways...
www.practicalmachinist.com

And welding 2 halves together made from steel such as 4140, without warping, distortion and changing the structure of the steel and then putting it up to your face and firing it is outright foolish.