I'm taking delivery shortly of a CVA lathe. Very similar to the 10EE early round dial but with a twelve speed gearbox, 6 in open belt, and 6 in a 13.5+- ratio backgear. The top end of this machine is 2220 and the machine could be ordered in a higher 3100 rpm configuration.

Does anyone know if the beds are the same ? I'm missing a few parts and watching for 10ee parts vs only CVA opens up the choices. The round dial change gears match the CVA. The CVA is an early MK1.5 with the clutch lever on the spindle. I think they were only made in 1951 following a few years of roundhead that looked like the Monarch. In 1952 they went to a different electric switch system and ditched the clutch which is what you see on most CVA machines.

Depending on the motor, I may install a 5 hp TENV Black Max 5 hp that I picked up NOS cheap. I understand the spindle can handle additional speed but wondering if the gearbox can as well. I will probably use a vfd and dial in a close speed gear and go 30 hz over or under, mainly over to fill the gaps. I'd like opinions as to whether overspeeding the gearbox could cause problems. I have a similar set up on my Smart Brown 1024 and am spoiled with the variable drive.

EDIT; The gearbox question doesn't make sense when comparing to Monarch as they didn't use the same system ( DUH )so any information regarding the CVA gearbox capability is the better ask. Since the lathe was designed for 50 hz power and a 1450 rpm motor vs 1750, speeding the gearbox even more might not be ideal vs swapping the pulley from the gearbox to the spindle. Dave
L

Can’t answer your questions, but glad you got the clutched version. Standard clutch on my Chipmaster is so nice in use. I’d imagine the similar sized CVA would be the same.

I had the mk 2 version and I really really liked it, I actually rate it above the Smart and Brown 1024VSL that replaced it.

If yours has the same motor as the mark 2 that can be reversed at full chat then dont replace it with anything else, its built about 5 times heavier than any other electric motor of the same size ive ever seen and nothing else will handle instant reversing without smoking out.

I also don't think overspending it is a great idea simply because it'll be very loud and I very very rarely use that end of the speed range but I'm sure it would all handle it fine.

Sent from my SM-G973F using Tapatalk
B

From the not so good pictures I have the motor is a GE, 3 hp large frame. I think the later machines had a different motor. My 1024 MK1 with a vfd and vector duty TENV motor reverses as you describe. The limiting factor isn't the motor or vfd but the flat belt tension. Kind of neat when I'm on my game ( not often ) as I can thread with one finger on reverse, back off the cross slide while pushing the button and let the half nut take the carriage back to start, go beyond enough to hit forward and crank the dial to the next number. Not pretty when it goes bad. Dave
R

The action on my cva was much more brutal than anything I think would be accomplishable with a VFD easily, even with a braking resistor. It would stop within maybe 2 revolutions from flat chat.

I think the very rapid stop was an option.
Mine does not have it but here's a picture of a machine (late 1960's I would guess) that does. 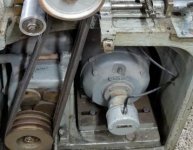 At the rear end of the motor a centrifugal switch is fitted. When the apron control was moved into the middle (Stop) position the reverse contactor was energised until the speed dropped to a few RPM when the centrifugal switch dropped out and the motor was de-energised. I don't know whether it worked when running in reverse.

Seems very brutal and must have made an enormous current demand on the supply, not to mention the mechanical stresses on the machine!

I wonder if the brake is the reason for the return to V belts on the late model. Seems like the normal flat belt would struggle. My Smart Brown with a vfd will reverse very quickly but the flat belt is the limiting factor rather than the vfd setting. My machine doesn't have that switch or the apron control. Dave
R

Mine didn't have the auto stop feature but the handbook just said to brake blip the control into reverse, I did that all the time and it held up perfectly.

Sent from my SM-G973F using Tapatalk
B

rblalexander said:
Mine didn't have the auto stop feature but the handbook just said to brake blip the control into reverse, I did that all the time and it held up perfectly.

Sent from my SM-G973F using Tapatalk
Click to expand...

Does your machine have the flat belt? Does the apron control cut the power to the motor and start back in reverse when you do that, going through a reversing starter? Dave
You must log in or register to reply here.