Drilling with a number 78 drill. They keep breaking!

Third/fourth the sensitive feed drill chuck. I've never been successful trying to use the quill with small bits (you can forget carbide bits).I use the sensitive feed fairly often in the bridgeport for under about .03 holes. I have two, one is an Albrecht brand sensitive-feed with a 0-3mm albrecht chuck, the other is a royal shank with 0-1.5 albrecht chuck. The 0-3mm is the most versatile since you can chuck 1/8" "PCB" carbide bits in it. The albrecht feed seems a little better made than the Royal; if looking at them on ebay, the Albrecht shanks have a smaller-diameter, thicker, black-oxide, feed-ring that you hold. They're a bit pricy ($200-ish, used with a chuck), but almost essential if you need to drill small holes on location (I've tried a couple of "sensitive drill presses", and aside from not being able to locate a hole in x/y like on the BP, still could not drill small holes with carbide bits with them; I have an old Dremel stand with the movable table that works better than those sensitive drill presses).

Also tweaked the spring on the Albrecht feed to just counterbalance the chuck such that the feel is even more precise, and easier to use.

I chuck the sensitive feeds in a (good) 1/2" collet in the BP, and use a larger carbide drill to spot the holes, then you can often use hss wire drills which are much more forgiving than carbide drills (especially running at a mere fraction of the speed that they would typically be run). On particulary fussy jobs (small and/or high aspect-ratio holes), I'll take a small brush with lubricant, and wipe off the drill-bit each time you "peck" it (yes, it's tedious, but usually successful with no broken bits). Cheers

(Hate those larger air-spindles, have to run a 5 hp compressor to power a dinky spindle, wear ear-protection, and they're still clunky and don't have but standard collets; probably still an issue with the lack of feed-control/feedback on a manual machine).

This operation will go OK even at vastly sub-optimal spindle speed if you can control the feed rate and peck increments quantitatively. There's no need to stone the cutting edges, either, if you can rigidly control the feed rate in a way that keeps the drill from being sucked into the work. A feed rate around RPM*(drill dia)/64 should work, even at 1,000 RPM, though it will be a snails pace of 0.25"/minute for a #78 drill. Using the RPM*(drill dia)/64 rule I have drilled 0.008" and 0.006" holes on a manual mill at 3,400 RPM, but with shallow enough holes that no peck was needed. The mill had the capability to let me dial in a precise feed rate in in/min. Pecking will be very tough to do on a manual machine. CNC could do it.

Do you need the whole 1/4" depth to be 0.016" dia? If it's just an orifice, for example, you could drill most of the way with a much fatter drill and leave only a drill diameter's worth for the 0.016 drill.
I

camscan said:
ask your dealer about a D bit or spade drill.
Click to expand...

I worked at a place that drilled 1/4” brass bars with a 20 thou drill, there were breakages btw, rpm was I think 17500 on the drilling machine ( a brush making machine) Titan drill, collet, the feed was sub second a hole, bad grind would wander the hole, the drill was solid carbide, it’s doable but low rpm is a killer
Mark
S

The Dremel drill press attachment works well, and a variable speed Dremel would allow more reasonable speeds. Other option would be a sensitive drilling attachment for a drill press. These clamp in the chuck and have a sliding spindle controlled by a knurled disc you hold in your fingers. They give much better feel on tiny drills.

MrWhoopee said:
One more suggestion, do it in the BP with the quill locked and feed up with the knee. No feel but much more control than with the quill.

Also, are you trying to drill without spotting? Drill point walk will kill you with a drill this small.
Circuit board drills with a minimum flute length might be worth trying.
Click to expand...

I drill holes like this all the time. In a bridgy spinning 4000.

You must spot the hole first. Just a solid tiny center punch will do, turned in your spindex to a point matching your drill point.

Then install your drill, after inspection on the point. Many bits this small are useless from the box, due to improper grinding on the point.

I use the quill and knee together. I set a stop on the quill and bring the table up until I just touch the spot, then I raise the table .005 and gently down feed the bit with the quill. Blow off the swarf raise the table and repeat as needed. If you watch the drill shank, you will see when the bit bends instead of drilling. When this happens, replace the bit and continue.
S

I have done thousands of .016 holes in 360. I used to have them in the turret of a Mazak SQT 250 MS. VooDoo to make them work. There was a very special tapered reamer that came after the #78 hole. If that #78 hair drill broke it would take out the reamer.
I made a special tapered reamer just for brass that works without the #78 hole. Part is finished with a sensitive attachment on a tiny crap box store drill press, #78 cobalt PTD bit. Finally found a .125 shank #78 bit to do the job.

1. The drills I am using are Chicago Latrobe HSS made in the USA and are new.

2. Do they make collets this small? I don't have any that will hold a drill this small. I am using a Llambrich precision chuck to hold the drill. Run out is not supposed to exceed .0012"

3. I will try but the Bridgeport does not provide much feel.

4. What is the recommended RPM?

And finally, digging around in the shop, I found my air powered spindle for the mill. It can go to 30,000 RPM but still provides little feel what the drill is doing. Run out is supposed to only be a couple 10ths. It's collets don't go small enough either!
Click to expand...

PLENTY of collet systems go to "Zero" or near-as-dammit. Genuine Bergeon "pin vise" already in yer drawer is the cheap monkey-patch to reduce an existing chuck, but a "sensitive" adapter will break fewer drills..

You are just not accustomed to working where makers of watches, instruments, "nozzles", orifices, sieves, and micro electronics trades have worked for well over a hundred years. [1]

Do some online research, chase-up what Larry mentioned as to watch trade goods. Plenty of it still in brand-new as well as surplus channels.

"Feel" can be enhanced if you use a sensitive DP with a rising table (P&W/Sigourney and-not-only) or by drilling horizontally using a slide or pad/crotch center in a ramlever TS on an instrument or watchmaker's lathe.

In small sizes the table or slide can have but a small fraction of the mass of the spindle (Adolf Muehlmatt/Hamilton .. or a lathe) or spindle PLUS integral motor or drive system (any lathe, my clumsy Electro-Mechano, a Dumore, or a(ny) Dremel/clone).

When I did not "already have what I already have...NOW.." I rigged for horizontal drilling with some rather crude wooden mounts and a salvaged granite window sill as "bedway".

So long as the SLIDE was Dead Nuts linear and wobble-free?
It can work.

Polished architectural stone can be surprisingly true and flat. Just "re-supplied" meself as my handyman had ripped-out a custom kitchen, had some LOVELY and THICK "backsplash" stone take-outs ....heading for the landfill!

Price was right! And no need to take the tile saw to chopping off salvaged surface plates.

And order-up an alloy that won't bust your balls, budget, or both, as fast as it busts the freakin' drills.

[1] Probably a boolschiess story, except that we actually CAN do this...

Tail end of the 1800's Burgomeisters of two adjacent towns used to meet for Saturday lunch, brag over the latest accomplishment of their legendary-good craftsmen.

One week the one fellow hands over a length of wire finer than a human hair that his best men have built a die to draw.

Following week, the other guy brings it back, says "put a glass on it".

Sure enough, magnification revealed that HIS guys had drilled a row of holes down the length of that "finer than hair" steel wire!

2) Sensitive drill chuck/shank, held in the BP with a collet, not a larger drill chuck. And check TIR, if not good during initial use get a replacement, don't try to "tap it in".

3) Sensitive fingers - you need to develop the "feel" of how the drill is cutting, so you can apply the correct pressure and notice when the drill stops cutting so you can withdraw before breakage. This includes backing off just before breakthrough of the part.

4) RPM is the least critical aspect here, the above three points matter much more.
Click to expand...

agreed, watchmakers drill holes a lot smaller than that and do so quite happily at 1500-2000 rpm. Speed just makes the job go faster, doesn't stop drill breakage.


add to that concentricity. A crap chuck will worsen things, collets are best. Look at how a Levin drill press or Servo drill press is set up. You can also spin the work and hand hold the drill in a pin vice - another watchmakers technique that works well because there is no run out if its not rotating.

The best device for sensitivity I've seen appeared in home shop machinist probably 30 or more years ago. Why? because of the brass counterweight. Build it with easy sliding fits and there is about zero force required to move it - unlike the various spring loaded devices. less forces acting on it = greater sensitivity. Its construction should be obvious from the photos - this is a great little tool! Can't remember the designer or I'd give credit where due.

Before I got a Servo, I would use a dumore speeder in a drill press. The DP is just a fixture in this case, a way to hold the speeder - turning off the DP breaker is a good idea. All to easy to reach for the green button by rote. the speeder gives good concentricity an they are not stupidly expensive used

brass, yes, remove the positive rake. tough to do on a such a small drill and I'm not sure its the problem in this size. Watchmakers would often make or buy a spade drill which eliminates the issue, if it is one. For sure it is with larger drills, just can't recall a tiny one being as grabby. maybe its happening and I can't feel it or may they ratio positive rake edge to chisel point is different enough to reduce/stop it (of maybe my memory has gone to shit...a viable option as well) 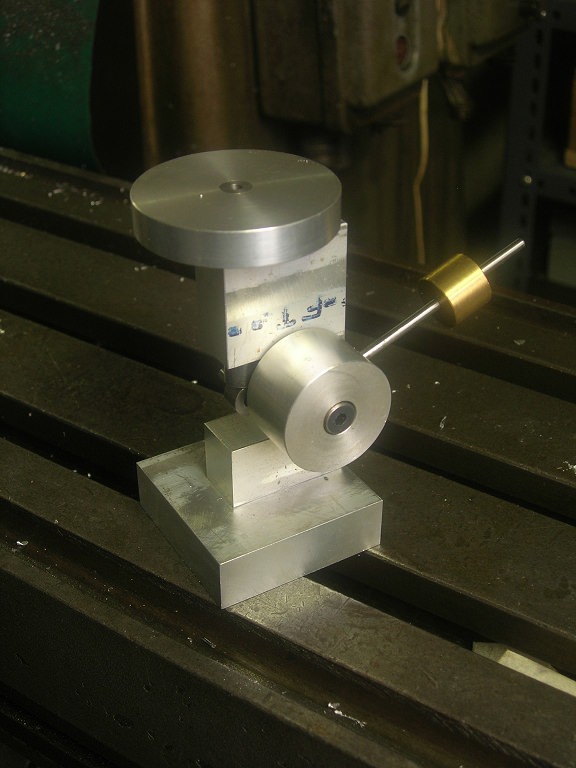 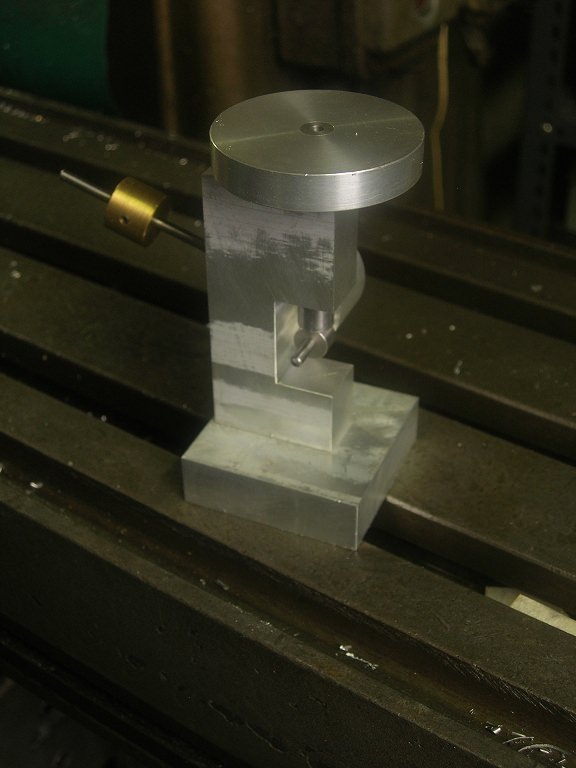 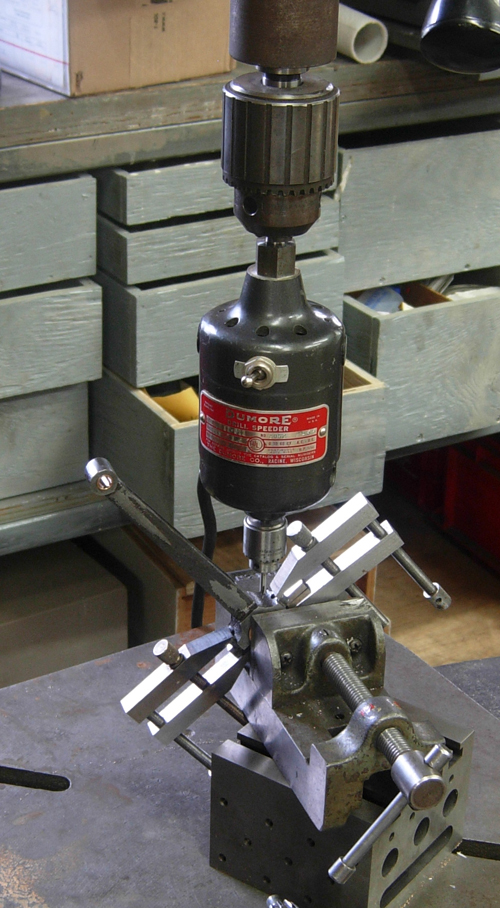 +1 on a Dremel drill press. It'll do, although a sensitive like Cameron works waaay better.

You're getting a lot of good advice here. I've had pretty good luck with 1/8" shaft carbides. A few years back, they were plentiful on Fleabay. Now, not so much, but you can still find them. All I'd add is--peck at it. Between pecks, look at the tip of the drill with a magnifier to see if any swarf collected in the flutes and use a soft toothbrush to remove it.

Ron
You must log in or register to reply here.