Hey all. We are having issues with our Erowa robot and was wondering if you had any ideas or similar experiences.

Our robot is set up to feed the graphite mill with the front magazine and the Sinker EDM with the back of the magazine. When it works (its been good up until recently), its an amazing tool. Lately it has been randomly dropping electrodes going from the magazine to the EDM.

We had an erowa tech come in two weeks ago and he installed new grippers for the end of the arm due to ours being a little bent, as well as a new PCU. The PCU was to remedy a different infrequent problem. And he realigned the pick up on the shelves of the magazine.

No issues for two weeks. Yesterday I came in to the EDM stopped because of another dropped electrode. We spent the day going through a lot on the robot to try and diagnose why. The issue we see as of now is that the shelves are bowed, some are almost more of a wave form. The worst one is about 70 thousands bowed.

When you set up this robot as far as the Z location that the robot picks up the electrode, you set the far left position and the far right position. The robot calculates if there is any angle in a linear z direction. You cannot set the height for each individual positions.

Has anyone ever seen this problem and how did it happen? We have had no real weight on these shelves. why have we gotten by for about 5 years with no issues and all of a sudden they are showing now.

Waiting on a call back from Erowa but I thought I would ask you your opinions. 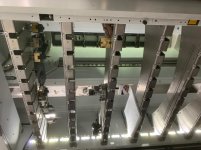 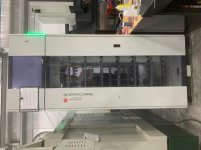 Why do pics always come in sideways as well? Lets fix all of my problems at once
You must log in or register to reply here.