I'm looking for some information that I can very well discover on my own given the time, but if I can find someone that has already done the leg work and willing to share said information that would be great. As you well know this control is ancient yesteryear technology and I would certainly upgrade the control in a heart beat if only I could find specifications on the servos used on this machine as well as the $$$ to do so.

The machine is a Makino KNCC-3HII-70 with a Fanuc 3000C control. I picked this thing up at auction for nearly the going rate of scrap iron about eight years ago. I have gutted the spindle drive control cabinet and re-wired all that to be rid of the 10HP M-G set and installed three VFDs to replace the M-G set. Why three? Because there are three spindles on this mill. The control was originally supplied WITHOUT S-code outputs wired to the M-G set for spindle speed control and instead a speed potentiometer was located next to the 'floating' operator panel. Currently one must open the spindle control cabinet, reach in, and adjust each VFD for the desired spindle RPM after an RPM to Hz conversion has been done. This is one PITA I seek to alleviate. I'm well aware that I can build a summing amp to send a speed reference to the three VFDs from a single pot, but I want to go even further and allow the S-code read from the program set the speed.

So, to begin with I would like to know if anyone has information on what additional card(s) must be installed (if any) and where I would pick up the BCD coding from said card(s). I think the M-code and S-code cards are the same part number and occupy separate slots, but jumpers must be set and I will need that information as well.

Before you rare back and get ready to bitch slap me over IP, licensing, and all that jazz, I've been on the phone with Fanuc and given the age of the control no one is willing to help and I venture to guess the only old fart left in the company that would know anything about it couldn't be awakened to take my call since he can't hear too well. Therefore, I'm going out on a limb and justify my actions with "since they won't support it, they won't mind what I do."

Yes, this machine is old. 1979 vintage, but it has hardly been used and it is stupid tight. It holds tols very well and (although it's a PITA sometimes) I really like being able to produce certain parts three at a time with this thing.

Any help in the form of direct information, contact info to a brother in law who might know, or other leads to where such info exists, tech manuals for sale (within reason), technician hand scratched notes, etc. are welcomed and much appreciated. I was fortunate enough to have gotten all the ladder diagrams, and other documentation with the machine and I have several active eBay searches going as well. I think I have acquired all that can be had by the general public in terms of Fanuc published manuals. What I haven't ran across yet is any documentation a technician might have had. Even the name of the manual where this info might exist would be helpful, I think. 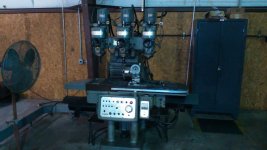 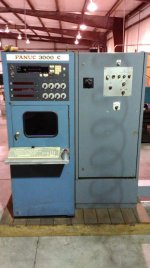 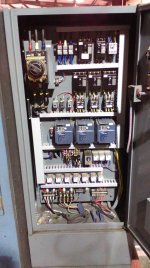