A friend and I were discussing a chuck he got on a "new to him" lathe. The chuck is a 12 inch adjust-tru style chuck and the chuck only seated on the smaller raised diameter on the backing plate, the discolored area on backing plate the in the picture. There was .03"ish between the outside rim of the chuck and the lower step of the back plate. 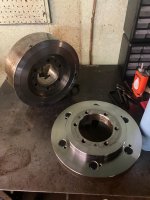 My initial thought was that it would be ideal to seat on the smaller dia face since that is where the screws that mounted the chuck to the back plate were located. In my mind if you contacted around the outside edge you could deform the chuck by tightening the mounting screws. The smaller contact area would also make for less resistance when adjusting the chuck. I thought maybe cutting an o-ring groove or use some other kind of sealant to keep chips and coolant wouldn't be a bad idea.

He said he was under the impression that the ideal situation was to face the plate until the outside rim contacted .0005" to .001" before the center of the chuck contacted the smaller diameter face. Possibly with some grease or silicone on the face of the smaller diameter to prevent swarf and coolant from getting into the chuck from the through bore. Any deflection would theoretically compensate for the jaws belling when clamping on shorter material.

His way of mounting the chuck seems to make a lot of sense to me but I was wondering if there is a standard or "correct" way to fit an adjust-tru chuck.

Yes the contact should definitely be solid on the outside rim of the chuck back. His idea of leaving a thou or so gap so that outside rim/face barely contacts first should be fine. It's also a good idea to grind the jaws in after any work on a backing plate.
S

I have what is the same setup on the chuck mounting as his, on mine it was factory mounted to the d-6 backplate and the od surface with out measuring hits at the same time so to speak as the mounting surface that the bolts go through.
At least on my it is staind on both of the surfaces when i break it down to clean it


When I find it I don’t need it
When I need it I can’t find it!
You must log in or register to reply here.

A
Help to identify a face/backing plate, 1.5 x 6 tpi thread

Material for Chuck Back Plate
2

T
Adjusting a 3 jaw in a rotary positioner?
2