Ford Triton King of the Sea?

Status
Not open for further replies.

First off, NOT MY TRUCK!!! I need to be totally clear about that. This is a picture car for a film I’m working on and might be the worst one I’ve ever seen. 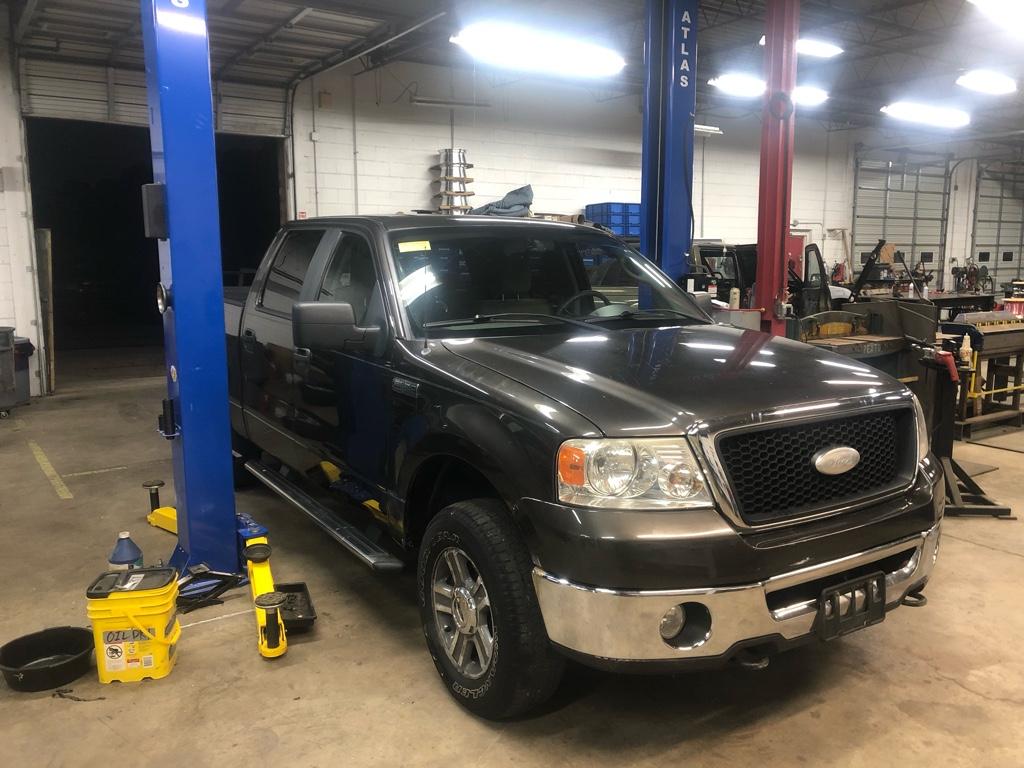 Doesn’t look that bad, especially not for the 199k miles shown on the odometer. 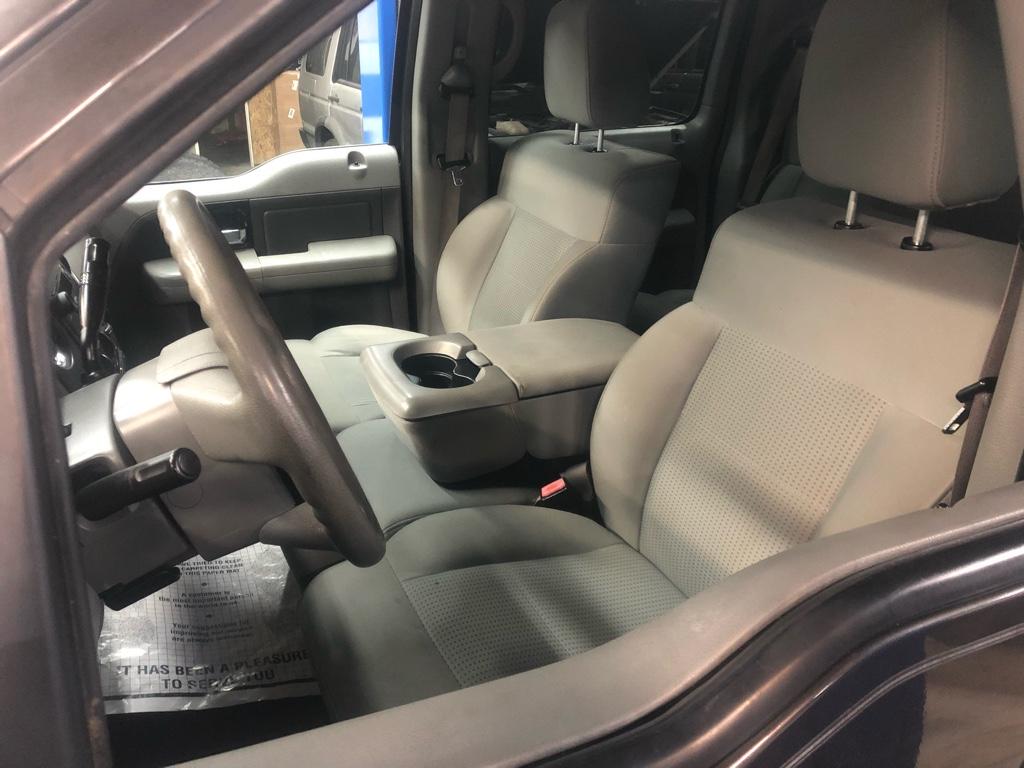 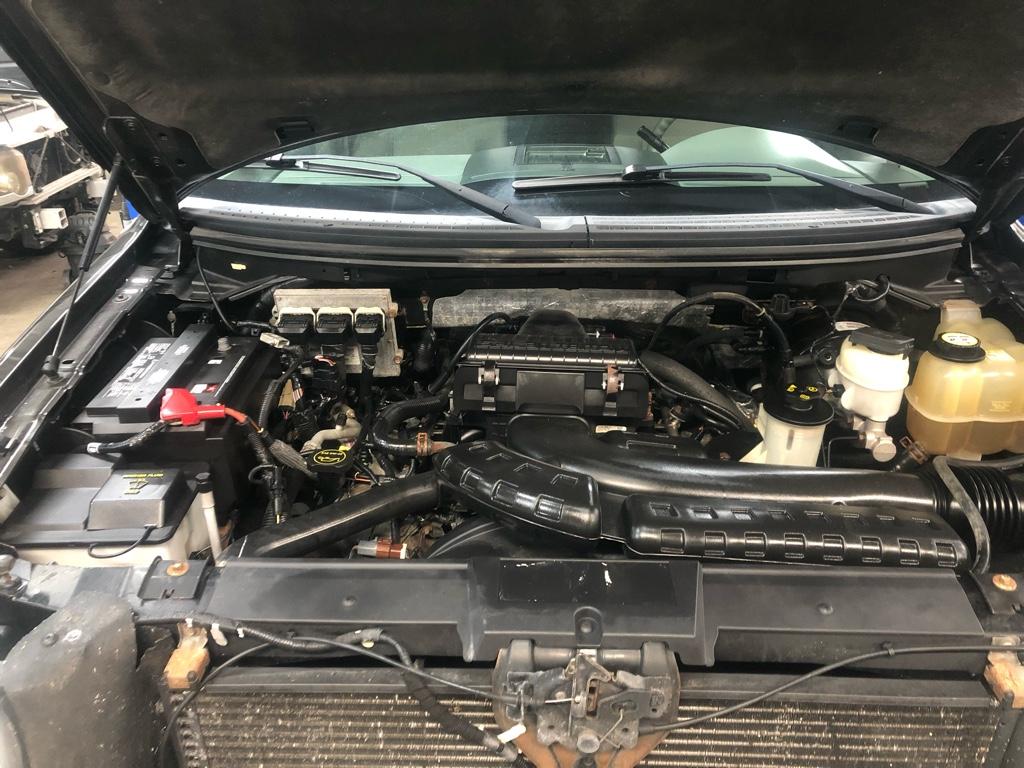 It was good enough to fool the director of the film, who saw it and thought it would be PERFECT! Sent someone over with a blank check and told them to “get that truck!”.

After today he’s not likely to admit whether he even looked under the hood, or underneath the truck before falling in love and spending the producers money.

It got sent to my shop to beef up the tow mounts front and rear and to add some mounts to the frame for mounting cameras.

It didn’t want to start when it came off the wrecker and barely ran to get it inside the shop and on the lift. Thankfully it’s not MY job to make or keep a pile like this running so I just mentioned to the picture car coordinator the issues and went about my work.

As I had to do some welding on the truck I went ahead and disconnected the battery. After seeing the interior and a seat that absolutely had not had an ass in it for 200k miles my “spidey-sense” was tingling. Popping the hood had it buzzing and by the time I had the battery disconnected I knew exactly why.

Like the seats, everything you can see under the hood is just too new. Way too new. Like none of this plastic stuff has even seen a heat-cycle.

Putting the car up on the lift confirmed it, this truck isn’t rode hard and put away wet… it got put away UNDER water. Deep rust on everything, with a layer of fine silt anywhere it could accumulate. The crossmembers are packed full, the running boards turned out to be full of silt, anywhere silt could get carried by water and not fall out easily during transport, it was there. Just like the silt, the rust was everywhere, not just the places where road spray carries salt, or a 4WD that got used might have rust, EVERYWHERE!

Deep enough rust I didn’t even bother with a wire-wheel on the grinder. Straight to a flapper-disc. I got my work done and told picture cars to come and get it. Now!


No one wants to say exactly what they paid for this truck, but much over scrap is too much. I got stuck with, most likely a “Katrina-car”, some years back. It was never right, cost me money, but it wasn’t half as bad on its face as this truck is. 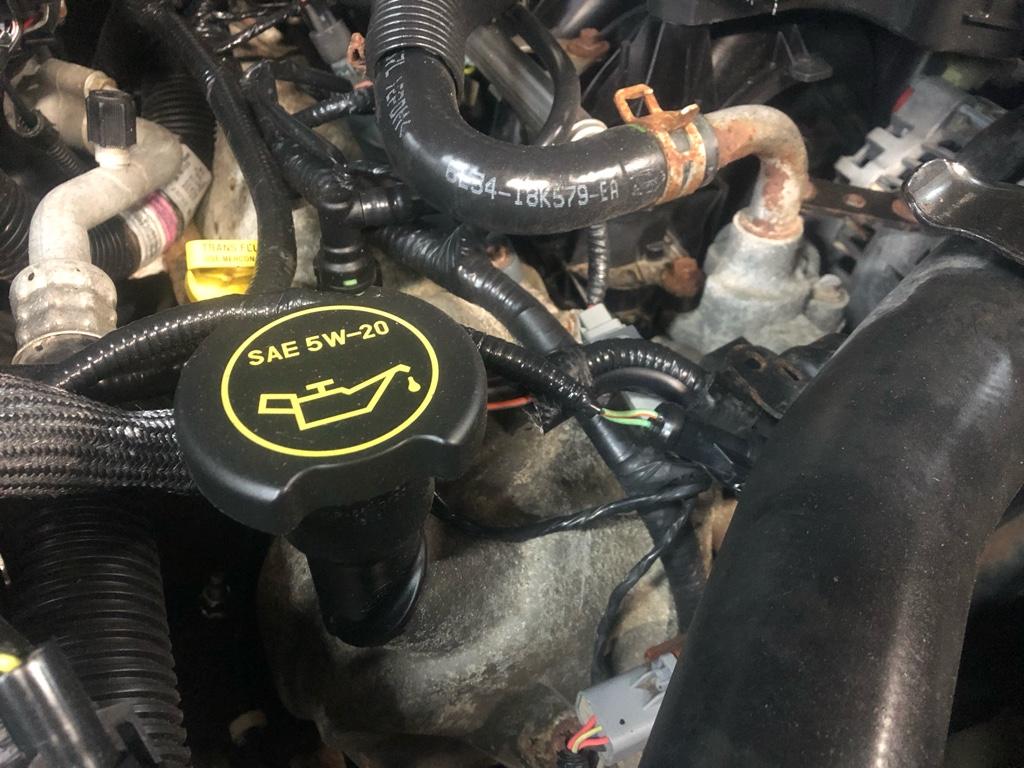 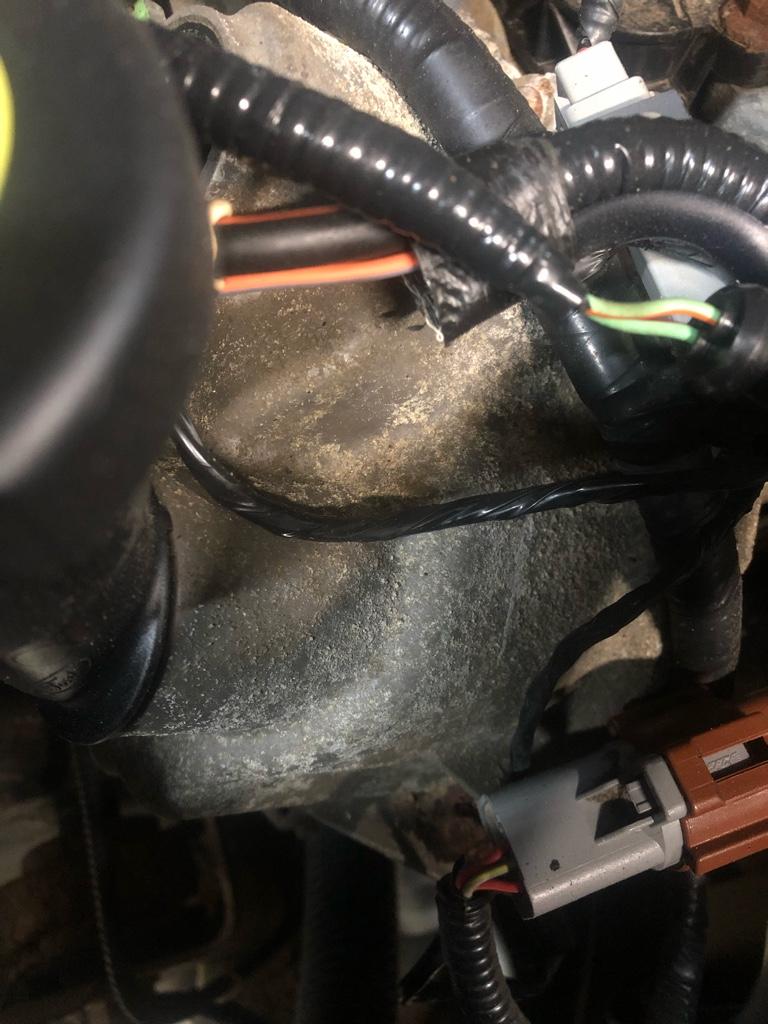 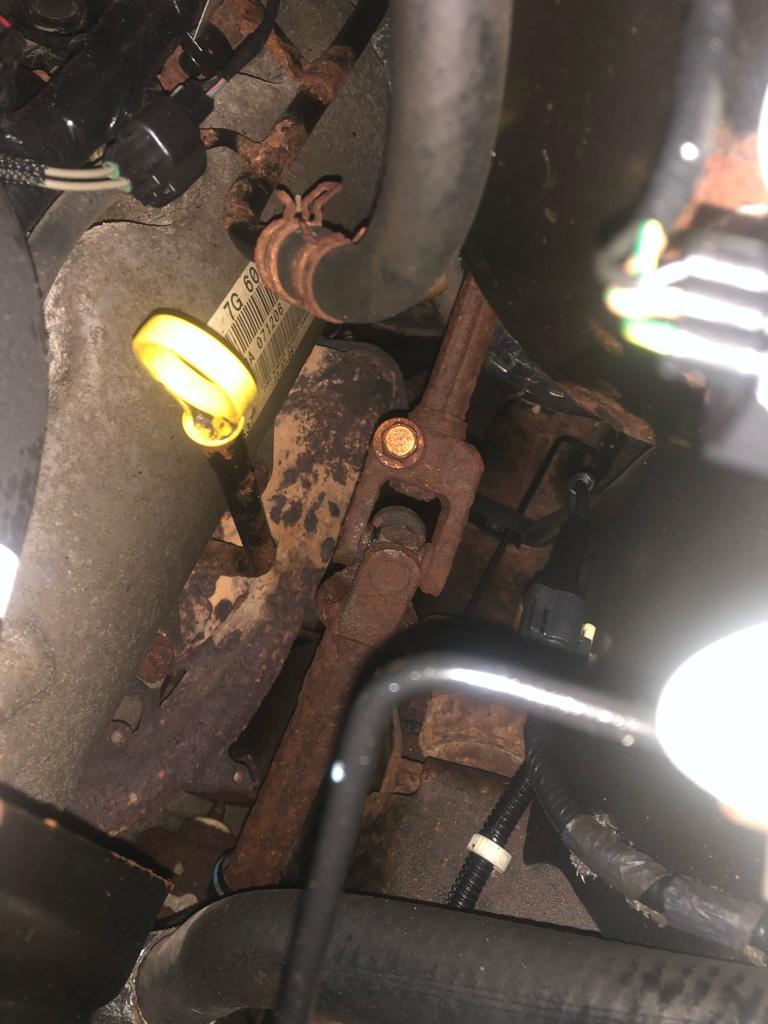 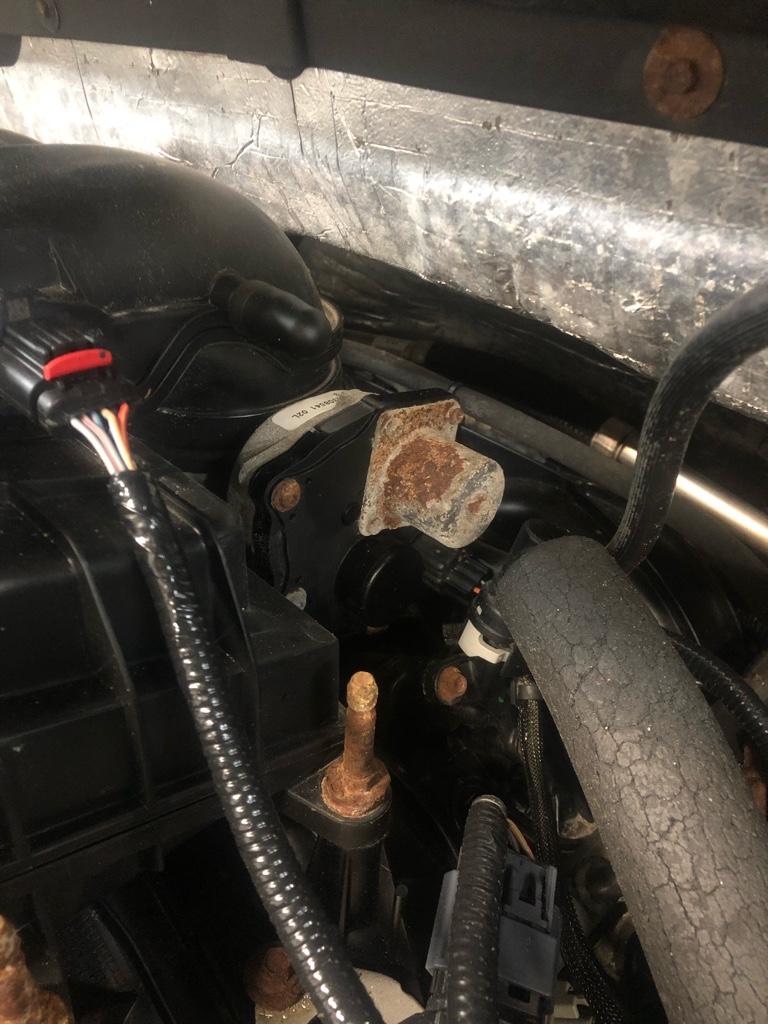 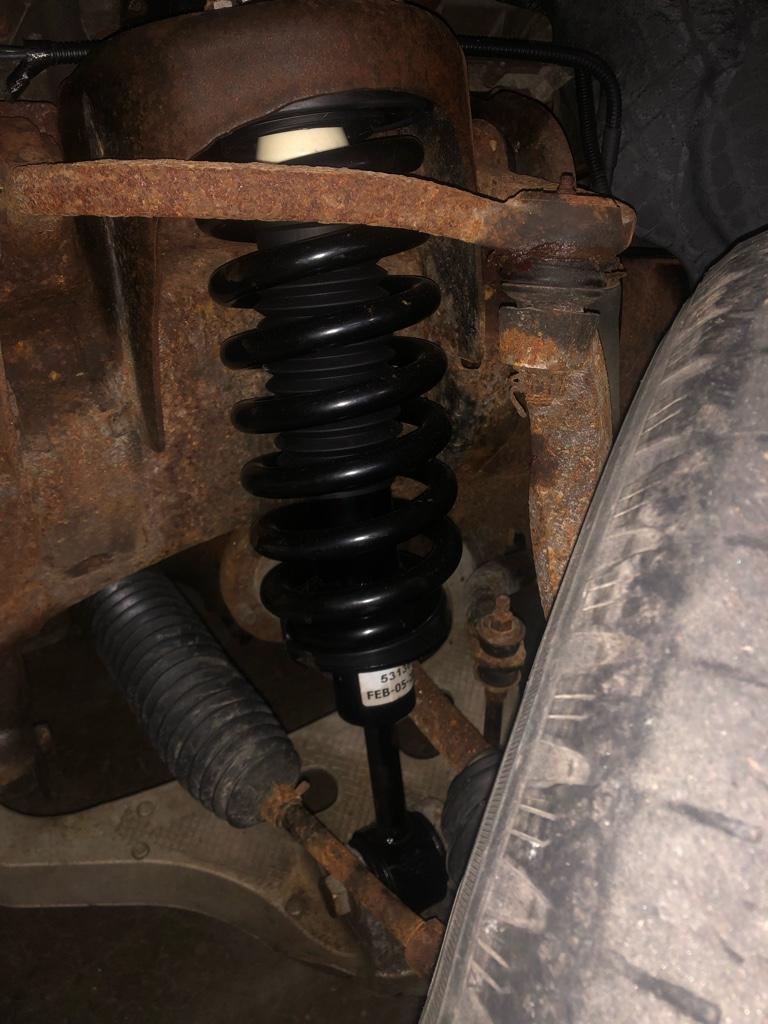 From the look of the valve covers, they were almost, if not totally submerged, and for quite some time. The paint is totally gone and the corrosion is as deep as the rust on the frame. Who knows exactly how it happened, or what who did to either make the truck right or disguise how bad it was. The harness under the hood is completely new. I’m not sure what sense it makes plugging brand new connectors and wires into an ECU that pretty obviously also sat underwater. I’m guessing the new front struts were because whatever they replaced had actually rusted through.

Incredibly the check engine light wasn’t on when I received the truck… it didn’t come on loading the truck back on the wrecker. It stayed off even when at least one rod started knocking and was off until this morning when Bryan Cranston started doing his portion of driving in this truck. Cranston was a professional about the whole affair, it’s typical that actors can be expected to drive… or to act… but not both. He was more that willing to do both, but not in this truck. In anything else? “Sure. But I can’t do what you’re asking of me, because you’re asking me to drive that truck and it doesn’t drive.”

Finally the CEL came on. The picture car mechanic pulled 22 codes with his scanner. And nothing easy, like an O2 sensor or gross evap. leak (you forgot the gas cap, dummy). Three of four camshaft position sensors aren’t working properly, crankshaft position sensor isn’t sensing, misfire, ignition retarded because of one or all… not to mention that rod knock that had settled into a steady paradiddle.

Thankfully my portion is over with this vehicle. I would assume after going through the trouble of replacing the harness, to whatever extent they did, that most likely the engine oil and probably trans fluid got changed as well, less likely the gear oil in the transfer case and axles, even so, my guess is that rod that started knocking was from a crankcase that stayed full of water. Whatever swamp-water/oil blend that was everywhere else surely didn’t do anything any favors.

The Tritons aren’t the best regarded of modern Ford engines no matter what, with their cam-phaser troubles. A similar truck that hadn’t been underwater would have likely caused problems, but not the sort I saw today, where an entire day of filming had to get punted. And we didn’t even see the typical electrical gremlins that water causes, you know, the horn that honks when you latch your seatbelt… or the headlights that turn off when the turn signals are on. My probably Katrina-car would lock any four of five locks when requested… the unlocked door rotated through the five locks at random and stayed locked through several lock/unlock cycles… hardly an issue until the drivers door came up in the random cycle.

Triton may have been king of the sea, but the Ford Triton is as suitable for underwater duty as every other car this side of a DKW is.

Go ahead and lock it up, everyone “enjoy” until that happens.

If you’re in the market for a truck in the metro-Atlanta area and find yourself at Key Auto Sales… I recommend looking a lot closer than our director did. From their Google reviews it seems selling shit like this isn’t uncommon for them. That IS the high water mark on that truck… those ARE scorch marks and chances are the bucket of sawdust you just saw that mechanic mixing with gear oil is absolutely going in a crankcase to quiet that terminal main bearing until you get your new truck off the lot.

Too good to be true - usually is.
M

Now THAT'S a purchase that won't be lived down - disrupting a filming day is expensive...

You have time to put "OT:" in front of the thread title, if you do that the chances of it being locked go down.
G

I learned pretty quick you don't pick the customer's vehicles apart. You do the work and make your money.

If you're not in the rust belt and somebody brings you a rust bucket call them before you start snapping off bolts and kindly explain that there may be some additional charges for penetrating oil and broken bolt removal. Make sure it's understood that the extra labor will have to billed for, but do it in a productive way.
D

Pix of rust make me think it "came down from the north"....

It's hard understanding why anyone would bother 'rehabilitating' a blah truck like that anyway....even half-assing it must have taken a lot of time and money. But, there's no limit to people who will half-ass a job.
R

No pictures of any of the welding work you did? Was it just speedrail starters or did you add mounts underneath so they could have a removable running boards for camera crew?
M

GregSY said:
It's hard understanding why anyone would bother 'rehabilitating' a blah truck like that anyway....even half-assing it must have taken a lot of time and money. But, there's no limit to people who will half-ass a job.
Click to expand...

In this, we are in agreement. It made no sense at all to do that work, except in this case the "right" buyer came along.
K

That looks like every truck I work on every day... with the level of drama in this post you should be in the movies.
G

After Katrina, one day I was sitting in a drive-thru line and noticed across the street the big Mitsubishi dealership had dozens of cars in the back lot, all with their doors open and the seats and carpet sitting next to them....all drying in the sun.....
T

My brother was working on his boat at a boatyard on the river Hamble (South Coast UK), the boat was on the hrad getting ready to be anti-fouled. My brother had been working below decks for a few hours when he cam topside to find that his car, a Ford Mondeo was underwater up to a few inches below the windows. The English cjhannel gets 2 tides a day, so it's easy to get caught out by the tides, and this was a very high tide.

So he retired below decks and carried on working until he could drive home. I remember him coming home, opening the windows, and running a garden house into the car until it filled up with fresh water. He kept that up for a few hours.

The car after that drove ok for a while, but electrical parts started to fail, he got rid of it when the last power window motor failed, that took maybe 2 years.
T

jermfab said:
It was good enough to fool the director of the film, who saw it and thought it would be PERFECT! Sent someone over with a blank check and told them to “get that truck!”.
Click to expand...

digger doug said:
Pix of rust make me think it "came down from the north"....

This happens to cars here because of the sea air. Had a VW that I got used a bug and I replaced most of the floorboard as it was rusted out. That took just 6 years to happen. Now undercoating protection is more widely used and it helps. Up north I am sure salted roads in winter take a toll on them.

It would be interesting to know if the rusted truck had a salvage title.

and interesting if carfax would indicate it had a dunking.
D

Trueturning said:
This happens to cars here because of the sea air. Had a VW that I got used a bug and I replaced most of the floorboard as it was rusted out. That took just 6 years to happen. Now undercoating protection is more widely used and it helps. Up north I am sure salted roads in winter take a toll on them.
Click to expand...

digger doug said:
Pix of rust make me think it "came down from the north"....

Exactly what I thought lol
R

triumph406 said:
Nobody thought of using something like CarFax?

Using CarFax has saved me from buying a few cars that had an undesireable history
Click to expand...

Katrina vehicles are supposed to have some sort of Katrina title. Maybe it was overlooked as this was the right vehicle at the right price.
G

Plenty of vehicles that have been underwater never make it onto the Carfax list.

Closed due to meaningless topic title

Status
Not open for further replies.

OT: Anyone familiar with the Ford LCF (cab-over) trucks with the 4.5L diesel
2

S
Work Holding on a Lathe