I'm moving to a new shop, and need to thin the herd a little. I have a 1924 16" Lodge and Shipley gearhead lathe with taper attachment that I think it's time to part with, as much as I don't want to. The attached picture was from when I first got the lathe, and before cleanup. There's no rust on machined surfaces.

The good:
- Complete, everything works
- All gears in headstock are intact (and look pristine!)
- All feeds and speeds in the quick change gearbox work as they should
- Taper attachment
- It's pretty clean - I derusted and cleaned it well when I got it, and used it for a couple of years. It was my first lathe

- Ground floor garage with easy access
- 2hp 220v single phase motor. Doesn't seem like much for a lathe this size, but I've taken 1/2" depth of cut (1" off the diameter) using it so I guess it's enough!
- MT5 in headstock, MT4 in tailstock

The not so good:
- The headstock babbitt bearing shells are out of shims, so replacement shells would need to be sourced or machined (bearing bronze was suggested as a good alternative over on PM forum), or new babbitt poured
- I never got around to unfreezing the taper attachment, and the bed attachment was missing. I fabricated a new one, which is ugly but should work
- Expected amount of backlash for a 1924 machine
- I wasn't able to remove the original worn-out chuck (pictured) from the spindle threads (although I didn't try *too* hard). So, the front of the chuck and innards were removed and the back of the chuck was re-machined as a backplate for the new chuck (not pictured) to fit on.

The lathe is free to a good home, as long as it will get used and not scrapped or turned into lampshades. Located in Chicago 60707.

The new chuck I put on was a quality 10" set-true style chuck. I forget if it was a buck or bison, but it was a good brand. It has soft jaws on currently, but the top jaws are american standard tongue and groove style so readily available. The chuck is not included in the price, but I'd be willing to sell with the lathe for $250. I'll be willing to sell the chuck separately, but only after the lathe sells. 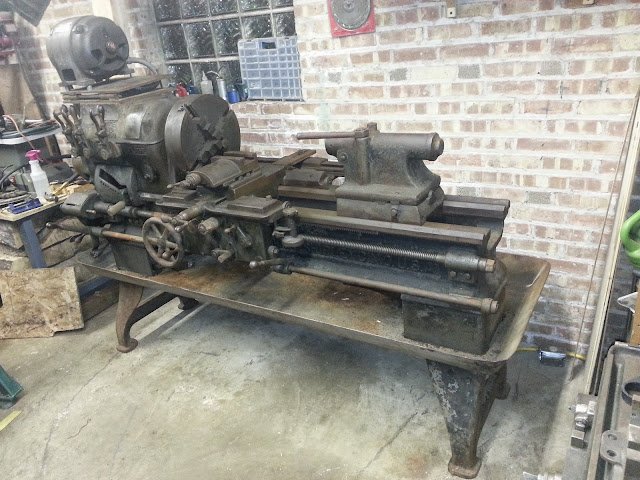 I have a 14 inch one just like your 16, same chip pan looks like the same length, and the motor on the head stock, still use mine once in awhile.
L

I heard back from the guy I know that he's interested, but not any plans to come pick it up. I will get after him a little more. I think he doesn't have a trailer, so let's see. I would be willing to pull it for him if he gets a trailer. Mine isn't roadworthy yet.
L

Thanks for following up. I have one other guy on the owwm forum that is in a similar situation - he's said he's interested, asked for more pictures but hasn't confirmed plans to pick up yet. Either way, I need it gone in the next few weeks before I list my place for sale. If it's not gone, I'll have to move it to the new place and then I might be tempted to keep the bugger....

Let me know if the others fall through. It would look nice next to the K&T 2HL you sold me a few years back. I can get it no problem, but I’ll need to rent a trailer. Im assuming that’s not a problem these days. I can check into it but I don’t want to jump the line.
L

Eric, let me know when you can - thanks

Lee, by all means if you have a definite taker, let him jump the line! Especially if he has one of its former shop-mates already. If the guy I know doesn't want to jump at it I'm not going to heckle him to do it. ECarter, all yours as far as my end is concerned!
L

Ecarter, the other guy decided he doesn't have space for the lathe so if you're still interested, it's yours. Shoot me a pm when you can, thanks

Thanks!
You must log in or register to reply here.