I’m selling my Smart & Brown 1024. I bought it in 2016 and spent 18 months renovating it. It was taken nearly all apart, only the spindle stayed in. I made many new parts, mainly for the apron mechanisms. I made several new shafts all from 4140, and replaced many bearings. Also ordered over $500 of new parts from Bracehand in the UK which has parts for the machine. Our Lathes - Smart and Brown Machine Tools, Bedfordshire

If you are not familiar with this lathe, here is a Tony’s write up:
Smart & Brown Model 1024 lathe

Every part was taken apart, cleaned in an ultrasonic (if it would fit) and otherwise cleaned up thoroughly. Painted parts were primed, sanded, some filler used and at least 3 coats of paint were applied. Note: this is not a show car finish, it was brush painted and you will find a run here and there. I used Benjamin Moore alkyd enamel. Bed has some wear, about 3-4 thou, this is acceptable for me and has not made a difference in my work, some of which is pretty close. The restored apron is a simple joy to use, controls are dead simple and it works very smoothly.

When I got the machine the motor was a 550 volt. It was also equipped with a electric brake. I had no way to run that so I pulled it and installed a new 3HP WEG motor and a TECO VFD. I tried to keep the look of the original controls and all the controls are in the same original plate. The VFD system works well. The cost for that was $835.

So about that original drive setup…I’m not a fan. The motor drives a 2 speed gearbox which then drives the spindle. That is all good…my issue was neither belt has any tensioning system in it, and the gearbox to spindle has to be glued in place. I decided to change that and initially added a tension system to the motor to gearbox. That was easy enough. But the spindle belt I had made and I glued in place was ultimately too long. It was at that point I decided that having a way to tension that belt was a good idea. I designed and built a simple system to do that. It was really luck in that the way S&B designed the gearbox mount it was pretty easy to do. My system may not be super elegant but it does work! I have a belt from: Any size flat drive belts by Al Bino Industrial Belting | Machine belts supplier

Many have sung the praises of this belt, yet I’m not super happy with it. It just does not feel super “grippy”, I have a McMaster belt on it the motor to gearbox on it now and I like it a lot better, I plan on changing the spindle one too:
McMaster-Carr

I can supply digital copies of the owners and maintenance manuals. They were really helpful in the renovation. As was the Yahoo group which seems to be gone totally and also the help of several people here, particularly in adjusting the 2 speed gearbox clutches.


About moving it…it is a heavy bugger. 2700 lbs or so. I have a walkout basement and the usual procedure is to use a roll back truck, a pic of the delivery of the lathe is included. We then use a pallet jack to get it into the shop. One of those low floor trailers would work too. If you plan on moving it yourself, bring help. Also I am working with a rigger who has offered to pull this machine and replace it with a new machine I’m getting. He can deliver to you if you are reasonably close to central NJ or has offered to bring it back to his warehouse and can arrange shipping it to you. You would have to work out those costs with him. I can put you in touch

It’s sold as a “bare lathe” which is how I got it, but I’m keeping the 3 jaw I bought and the Multifix clone I installed. The original turret toolpost is included but not installed. Taper attachment is included as well of course. I can supply other photos if you want, just let me know. Why am I selling it? My wife would like to know the answer to that too! Maybe I’m fickle when it comes to lathes. This is about the 6th machine I have renovated, maybe I just want a new project.

Price is $3900.00 and it is near Princeton, NJ.
Use email to communicate: pjpickard @ gmail.com 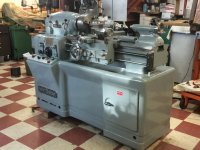 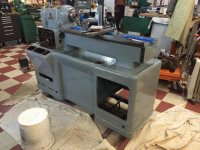 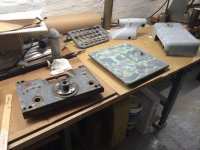 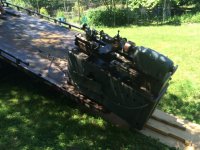 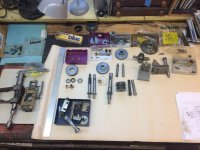 Here are some more pics. I should have mentioned the power is 220 single phase which might be good for the home shop guys. I hope someone can get this and have some fun with it! Also included is a big stack of gears, and note this machine can cut metric threads too. Note 5C collets are NOT included! I might have a dup or two if you need those sizes. 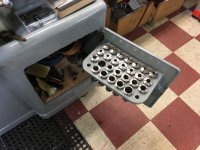 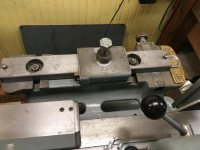 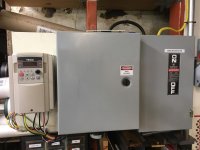 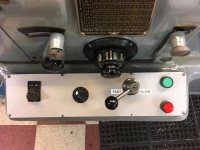 How does this lathe compare to the De Valliere you sold a year or two ago? I know those two are different beasts, but given that you had both in your hands and presumably at least tried them a little, I would be curious to know how you would compare them.

I have been kicking myself since that lathe was sold. I had just spent some significant money on a Deckel FP1 mill, and I was a bit gun shy. Both machines have D1-4 chuck mounts which is the same as the "unmentionable" I have had for close to 10 years.

Also, I went to look up the S&B on lathes.co.uk, and my impression was that it could only do English threads. I am assuming that you need to use some of the gears in "the stack" you mention. Do you have some document you could share about that? Or at least, a list of the metric threads that are possible on that lathe.

Curious what the replacement lathe would be?

Comparing the De Valliere and the S&B is a bit night and day...I have also used a Monarch 10ee quite a bit and in my real job we have a few Hardinge HLVH's. Also had a couple Rivett 608's but they are a different animal. Funny how 4 machines of all about the same size can be so different. Cranking the carriage back and forth on the S&B, it just feels massive, its long and lots of way contact. The De Valliere was more "dainty", not really the right word but it had a lighter touch. Honestly if I had the room, I would keep all of them. One feature the Deval had that I really liked was the feed stop. (After I figured out it had it) You get set that and it would repeat within a few thou. And that tailstock with its quill feed was great.

You asked about metric threading so I am including some pics, snaps from the manual and the a couple pics. I cut a number of threads on the Deval, but never on the S&B.

L7, not yet cast in stone...but as much as I would like the Rivett that is for sale here, its a bit rich for me. This would probably be my dream lathe, but I doubt I will ever come across one( a member here got one a few years ago) Rivett 1020R Lathe

Sorry those screen grabs from the manual are so tiny! 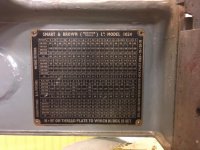 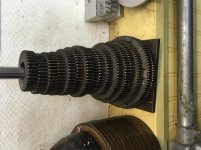 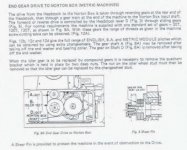 I knew you provided insightful information.

Sent from my SM-N950U using Tapatalk
B

S and B can cut quite a few metric gears with the English gearbox and a few changegears but you probably have to make them yourself. I think they are 24,20 and hard to find. Dave
S

Update:
Last weekend I fitted the new belt I got from McMaster. I'd say a definite improvement! I spent yesterday turning and boring a 3" OD titanium piece and it went well.So the now owner now has a selection of belts!

Speaking of that new owner...there have been a couple of emails showing some interest...but I'd like to move this. Now $3500.00 Way less than what is in it. Remember there is some assistance with a rigger, either for local delivery or shipping to a more distant location.
G

Must be trick photography, pic 4 looks to me like the trailer is tipped at an angle and the lathe is ready to fall over.
B

Those are very high end machines. I have one or would snap it up. Dave
S

Yeah...its just the angle. The rigger was a real pro. He had it off and in the shop in matter of a few minutes.
S

Lathe is sold, thanks for the interest!
C

Glad to hear. Hopefully the new owner is elated with his purchase, I know I would!
You must log in or register to reply here.