My love for my Swiss machines is betraying me as I have to thread a part longer than the guide bushing land, so I have to turn and thread multiple segments while keeping the threads matched up. I was told to use G32, with a 30 degree lead in/out where thread segments overlap. The first segment looked fine...I would rapid to X-depth then G32 axially with a G32 30 degree lead out, so two G32 lines. However, the other five other segments are not quite right and all suffer from the same problem (please see the attached pic.) The only difference I can deduce is that they all have THREE G32 lines, since I am also adding a G32 30 degree lead in line. It looks like the starting z-location for the axial cut is moving on each pass. Please see the attached segment of code. I must be calculating my Z-starting point prior to the first G32 line incorrectly, right? (In this segment I am trying to thread from Z.400 to Z.800 but have to add the lead in and out before and after that) 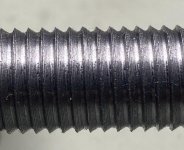 Well I don’t know what I was thinking but it was wrong! I guess one simply starts two thread pitches away in Z and then move that far in Z and down to whatever your X depth is for that pass (and then do the same thing with exit) like:

That would be to overlap a thread segment that had previously gone to Z.500. That way it’s leading in to cut depth over two thread pitches and allowing for one full thread of overlap and final depth.

It worked beautifully and I can’t even see the little mismatch marks!
You must log in or register to reply here.