I saw an older Grob bandsaw at the used tool dealer. I think it is 18". all pulley drive with no transmission.
It has the normal table slot front to back to remove/install the blade. It has a solid iron strip covering the slot. It has another similar slot from the blade to the right hand edge of the table. That slot has a similar iron strip covering it but that strip has drain 1/8" holes? drilled in it all the way through. I did not really notice what it looked like at the edge of the table.
I have seen mention of a chip conveyor but that slot had no moving parts visible. Any idea what it is for? I would guess a cutting oil drain down into the base somewhere hidden away. But it seems unlikely much percentage of oil would happen to go into it.
Bill D
J

A photo would be useful.

Joe Gwinn said:
A photo would be useful.
Click to expand...

Immensely. Was it part of a feed mechanism? Use the holes to put in pins and assist work into the blade?
L

A photo of the machine would be interesting, but labelled illustrations are better. Vintage Machinery has a Grob instruction book that shows that the slot pointing toward the face of the file or saw blade is for a feeding device and the one at 90 degrees to the direction of feed has holes for center pins for cutting circles of different diameters. See page 3.

As a bonus, I found that Grob made "open end" band saws. They used a 140 foot long narrow blade (that was not welded) that wrapped many times around top and bottom drums. It would cut for a while, then you stopped and quickly rewound the blade to the top drum and ran it again. It was an alternative to cutting a blade to pass it through an internal hole in the work, then welding the blade, doing the sawing and cutting the blade again. I thought that was an interesting idea.

After I got home I realized I should have taken a picture. I do not think it would work for a guide since I believe the metal bar slides in the slot.
Bill D
B

Guys were correct it is a guide for circle cutting. I gues the slide bar can be locked down somehow. Not mentioned in the manual from 1938 here seen on page x134
Bill D

Larry is correct on both counts. The feed mechanism is gravity driven by weights and damped by an air cylinder.

The originals are here on the hoof, so to speak, if pix are needed.

L Vanice said:
As a bonus, I found that Grob made "open end" band saws. They used a 140 foot long narrow blade (that was not welded) that wrapped many times around top and bottom drums. It would cut for a while, then you stopped and quickly rewound the blade to the top drum and ran it again. It was an alternative to cutting a blade to pass it through an internal hole in the work, then welding the blade, doing the sawing and cutting the blade again. I thought that was an interesting idea.

I'd HATE to be the new guy learning that thing.
M

I have an old Grob NS-18. All belt drive like you mentioned. I really like it. Its a good saw. Company is still in business and still sells parts for it. Should be a good purchase.
B

Bill D said:
I dis not notice the blade guides. How do you like them?
Bill D
Click to expand...

I have a 1951 NS 18 also, it's a really well-made saw. They are interesting the way they're constructed; most of the parts were apparently fixtured and welded, , as there are very few adjustments on the guides and such. When I refurbished the one I have (new bearings, belts, VFD, fixed the welder), the blade guides/arms/wheels were in perfect alignment, and the (hollow-cored) table perfectly flat. The compound trunnion system is also unique with the big ground sector and tapered "tooling pins" it rides on--better than most of the wimpy poorly-balanced convention trunnions present on bandsaws. Put a VFD on it, and you rarely need to change belts, and can slow it waaaay down for doing things like cutting steels and heat-sensitive materials, and it's so quiet you can't even hear it running. Plus, some folks are fascinated watching the big belts and pulley system go round and round....I was thinking of putting some blue LED's in there....

The bronze guides work well; the idea behind these is that they actually provide more blade-support and less point-contact than using rollers for side and/or back blade guides, for the blade sizes and speeds it was designed for. It's not a monster saw, but works very well within its intended capacity.
B

I found photos of the table on ebay. Looks like it has a wingnut and bolt to adjust the slider with the holes for pivot pins. The one I saw was coated in swarf and oil hidden in a dark corner.
Bill D

I love my Grob NS-18 Bandsaw. I'd put it up against any DoAll any day! I too refurbished mine with a VFD and different air pump. Also built a set of ball bearing roller guides in place of the aluminum bronze blade guide blocks it came with. They probably work fine, they just look wimpy in my opinion. Mine does have the circle cutting attachment, too!
N

My NS18's table also has the two slots at right angles to each other. Later models had just the single slot, parallel with the blade, not sure when Grob made that change. Mine was made in '47 so sometime after that.

One could put a conventional fence system on this table, but having more time than money at the time, I made this fence/miter. 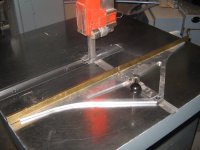 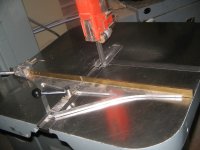 Works well - locks to the slot as a fence and locked in the "parked" position is used in the other slot (with an adapter) to push stock through. A modified Workstop makes cutting multiple blanks to length easy.

The only change I would make to it is the locking mechanism. It uses an eccentric and roller in the slot to lock in place, but a pipe thread would be a whole lot simpler and more adjustable for wear.

Love this saw, changed my shop life. Prob the last tool in the shop I'd consider selling.
B

I think the extra slot arrangement was a option that was seldom built. Not sure how long the availbility of that option lasted.
Bill D

Location
Upstate NY -In the Flats next to the corn fields

A couple winters back I got into my newly acquired 4V-18 (with 4 speed gearbox) and didn't like the fact that different guides are required for various blade widths. So I proceed to design and build fully adjustable guides that accommodate blade widths from 1/8 to 1". Since the saw came with several boxes of the same size aluminum-bronze guides, I incorporated those into the adjustable guides I built.....
They work great and I like the fact that the A-B guides support the blade with more than line contact like ball bearing guides or small carbide pads.

What I shoulda built instead of buying Carter guides....
C

Nice work on the miter gage and blade guides, I may borrow a couple of ideas, thanks.

The NS-18 (at least the older models, mine is from 1951), was originally set up to use a maximum 1/2" wide blade; this is evidenced by the cutting chart (replete with asbestos data), the welder capacity, and the bronze blade guides came in a max 1/2" deep size.

One of the most interesting things about this saw is the trunnion design, I don't know if newer Grobs use this design, the 4v shown in another post has a conventional cast trunnion. As shown in the pictures, a big ground plate sector sits on two big flanged beveled tooling pins, and is restrained and clamped by two clamping pins actuated by two cam levers on the back (the center cam-lever is for the blade holder asm). This also has the compound axes.
This is by far the most stable, easiest to move, and best-balanced bandsaw table I've had, either on a small or larger saw (14,15" wood saws, 21" Delta metal saw, 24" northfield wood saw, standard DoAll). The (big 24x24) table is a hollow casting, and 1/8" plate used on everything. Much was apparently jigged together and welded, since the only adjustment on the original blade-guides is front-back and they are perfectly aligned with top and bottom wheels. On this saw, I put a VFD on it, fixed up the welder (they're pretty simple mouse-trap affairs), replaced the bearings (wheels and jackshaft), belts, scabbed on the smallest worn-out pully on the jack-shaft pully cluster (wasn't needed with the VFD), brushed on a coat of Rustoleum Pro Smoke Gray. There's a ratcheting "mechanical power feed" with adjustable weights actuated by the foot pedal, and slot bar mechanism (just played with it, never used it). It's sort of therapeutic and hypnotic watching all those big silent pulleys and belts goin' round and round. Cheers 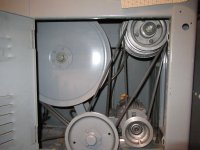 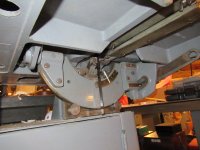 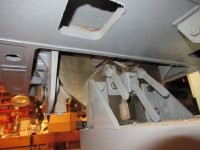 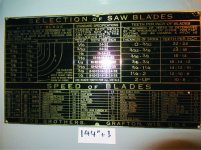 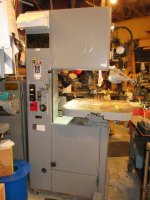 My 1944 model has the exact same setup. Yours is much cleaner than mine! I didn't take any of the pulley stuff out of the cabinet to paint. Someday I will. Some of the bearings in the jack shaft assemblies need changing out.
C

4GSR said:
My 1944 model has the exact same setup. Yours is much cleaner than mine! I didn't take any of the pulley stuff out of the cabinet to paint. Someday I will. Some of the bearings in the jack shaft assemblies need changing out.
Click to expand...

The bearings are all readily available common inexpensive bearings, and easy to replace. One hint when working on the bottom wheel bearings is to wedge/chock the large dual pully drive to the inside frame so that the shaft and bearings won't move around. Cheers
You must log in or register to reply here.