I bought a 1999 Haas SL20T and servo bar 300 this year that were originally sold together but I had some issues getting the bar feeder working. Maybe this will help someone else out there in the future.
The first thing I had to do was set the number of aux axes to 1.
Seemed like it was mostly functional when I first hooked it up but then it would just cycle the vee forks that load and unload the bars and stop at random spots with a 452 (458?) alarm for gearmotor timeout. Then I really got it jammed up and it would give me a 398 aux axis servo alarm. Eventually noticed the bolt head for the cam follower was rubbing against the arm that raises and lowers the pushrod. 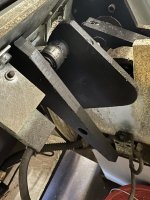 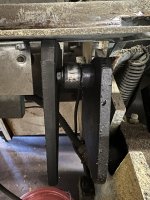 Eventually pried that out of binding. You can slowly turn the gearmotor with the power off (or e-stop) but you have to go slow due to the gear reduction. By doing that I was able to get the cam to a different spot so it didn't hit the pushrod arm.
One tip Haas tech support told me I probably never would have figured out is you can handwheel/jog the V axis (barfeeder) by pressing the V key then the handle/jog key.
To change the parameters you have to push in the e-stop button, then go to settings, press the seven key, then the down arrow. Then press the left or right arrow and enter. I increased the gearmotor timeout in the parameters (318) to 99999. Then it would run for a long time before alarming out, just slowly swinging the vee forks around. After some more inspection I noticed the switch under the cam was badly corroded and the roller was no longer round. 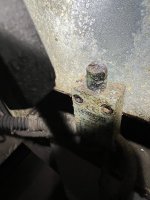 Got a replacement from Haas for about $300 and put it in. Now it seems fully functional but I don't think I've completely figured out the programming. G105 Q2 should set the bar length (after jogging bar to the right position) but it sometimes only works after a G105 Q4. Manual says Q2 and Q3 only work after a Q4, but I've gotten Q2 to work without doing Q4 first at least half the times I've tried it. The problem I'm having with G105 Q4 is that I just have one bar right now to test with. It tries loading another one and pushing that one in and the pusher starts going super slow. If you let it get to the end it gives a 448(?) out of bars alarm. If, while it's creeping along, you push down on the switch plate near the lathe end of the bar feeder (I did this with a wrench for safety) then the ballscrew kicks into high gear and goes back and forth and brings the pushrod down. Anyone know what I should be doing differently here? Then you can set the bar length as recommended – reset – handwheel to position – clamp – G105 Q4. I also changed parameter 250 (chuck unclamp delay) to 2500 (milliseconds). Seems like clamp/unclamp are reversed on mine, 249 is supposed to be chuck clamp delay and after some experimenting I put that back to 500ms. I had noticed that almost as soon as the chuck started clamping the pushrod would start retracting, allowing the drawtube to pull the stock back.
To set the barfeeder parameters press current commands and then page down to the bar feed setup page.
If you press diagnos and page down you can find the servo bar switch page which also shows the bar length/position 3111/3112 that can't be manually entered.
Also looking for a bar tray for this bar feeder and an auger motor and auger chute for the SL20T if anyone knows a good source.
P

I still don't have the barfeeder completely figured out but another thing I adjusted was the end of bar switch. When I went into diagnos and paged down to the servo page, that switch would read 0 even with a bar sitting on it. If I pressed it down farther it would read 1. So I removed it and bent the arm up a bit until it seemed to be switching properly.
I ran six bars through the machine though and on most of them it would alarm out by reaching the end of the travel near the end of the bar. On one of them it did decide it had gotten to the end of the bar but I didn't have one in the tray at the time. It tried loading the next bar but didn't detect one and stopped.
Another issue I had was it seemed to be feeding the bar out too far. After a lot of measuring I realized the .78" drill I was running at 90% spindle load was pushing the bar back in the chuck some while it was drilling. I'm using a hydraulic chuck at 200psi with serrated hard steel jaws on smooth 1.25" steel bar stock. This caused the first part to come out short. Then the barfeeder would feed the right amount but the bar had been pushed back so now more bar stock than I expected was sticking out of the jaws. The drill was the first tool and would push the bar back about the same amount every time so it was actually making good parts. I backed off the feed on the drill and that solved the problem.
You must log in or register to reply here.