A South Bend model 584-SB, S/N 37963N, was recently donated to a hackerspace where I am a member. I've not been able to find the 584 explicitly mentioned in a catalog yet, but what catalogs I've been able to find, the setup seems somewhat of a hybrid between the setup of of the 1928 522 9" Simplex Motor Driven Lathe[1, page 6] (the counter-shaft mounting arms in that picture look very much like the ones on our unit), and the 1934 model 784 11" Horizontal V-belt Motor Driven Lathe[2, page 20] (the counter-shaft on ours has that large v-belt pulley). There is one smaller flat-belt pulley on the opposite end of the counter-shaft from the v-belt pulley, such that I thought it was originally designed to be driven from overhead belts, or at least, with that as an option. Or maybe not. It is possible our drive setup is not original -- the mounting of the 1/3HP motor and counter-shafts to the bench looks like a retrofit job effected somewhere during the 1960s or 1970s.

In my searching for information on the 11" lathes, not much is coming up, and most of my Google searches end up directed here. I get the impression that the 11" series where less popular in comparison to the other sizes. What information is linked in the sticky posts at the top of this section has been helpful -- many thanks to the people who have taken the time to preserve and collate that info.

So, what lies in store for our 11" x 5.5'? Well, had I my druthers, it would get a complete teardown, cleaning and rebuild, and paint job. But, I'll have to get buy-in from the other members on that, especially since our other late, a hobbyist-grade combo machine , is also presently out of commission for a cleaning & rebuild. Having both lathes inoperable at the same time will be a hard sell. Hopefully, once the smaller combo lathe/mill/drill press is running again, I can convince the others that taking the time for a full teardown and rebuild is worth it.

There's some talk about replacing the 1/3 single phase motor with one of the 2-3HP DC motors we have in our spare-parts stash. I am also working on plans for a more sturdy mounting for the motor drive. The looseness of the mounting, held in place largely by the weight of the motor and counter-shaft balancing against the tension of a decades-old leather belt, appears to be the main source of vibrations during operation.

What I am hoping to learn is what parts or accessories from the other, more popular lathe series, like the 9", 10" and 13" or others might be compatible with our 11". Or, if nothing is directly compatible, what is close enough that it could be coerced into compatibility with some machine work done on, oh, I don't know, say, a working 11" lathe.

Pictures will be forthcoming.

What I am hoping to learn is what parts or accessories from the other, more popular lathe series
Click to expand...

I would get a set of felts for it , install them & run the lathe . You could rebuild it if it really needs it after the other lathe is up & running .
animal
D

animal12 said:
I would get a set of felts for it , install them & run the lathe . You could rebuild it if it really needs it after the other lathe is up & running .
animal
Click to expand...

I agree with above, just lubricate, replace felts, and run it to learn what really needs fixing. I purchased a SB 9" a while back and despite being in excellent shape had it completely broken down, and rebuilt and repainted, and quite honestly I regret doing all the work. Should have just done the minimal work necessary to get it working and not worry about paint, etc...
K

As promised, have some pictures.

Some general shots of the lathe: 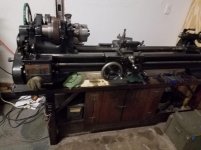 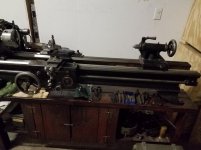 Speaking with the previous owner and some of the other members, I do believe the bench the lathe rests on was built by the original owner. The wood planks measure really close to some numbers I found for actual size of dimensional lumber for the early 20th century. 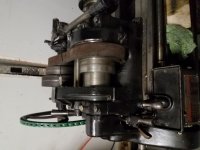 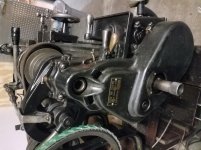 (I don't know why those photos got rotated, they were correctly vertical on my computer.)

The lever with the electrical tape handle-wrap is part of an engage/disengage mechanism which pivots the counter-shaft forward and back to tension or loosen the drive belt. Thus, the motor can be running, and the spindle still. In theory, one could change pulleys while the motor was running, though I would personally want to shut the motor off to improve my chances of keeping my fingers. 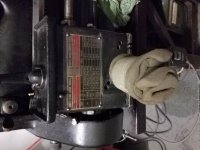 (Again, pic got rotated)
I don't know why the foam is wrapped around the handle. I took it off and found a nice metal knob on the end of the lever; I'll have to take a picture of it so y'all can tell me if it's original. Best guess for the foam is that it to make it so the end of the lever doesn't bite people's knees quite so hard?

It appears there is an attachment limit. Continued in the next post.
K

My posts seem to be gated behind moderator approval, probably because I am new here. That's fine, just my posts will be slower coming until I pass the threshold to be trusted to post directly without approval from moderators.

Next up are shots of the intermediate shaft and engagement mechanism. IMO, it's janky, and the lack of rigidity in the mechanism and the consequent lack of tension on the flat belt between the intermediate and spindle shafts is a major source of vibration when the lathe is running.

The motor and intermediate shaft are mounted on some wood planks, themselves mounted on a door-hinge-based pivot mechanism mounted on the rear of the bench. 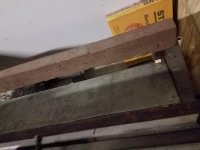 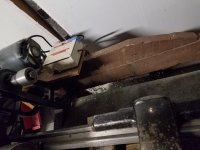 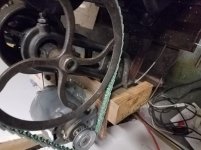 A lever made out what looks to have originally been perhaps a cargo-belt clamp of some kind, and various scrap bits pushes or pulls the intermediate shaft into or out of engagement with the spindle shaft. 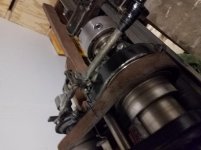 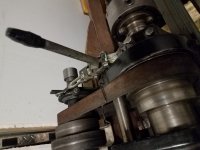 There's two ways I could go about improving this. First and simpler, would be to just ditch the whole mechanism completely, and mount the motor and intermediate shaft directly to the bench. However, I and the other members rather like the ability to engage/disengage the spindle independent of starting or stopping the motor. So, the dream is to figure a way to have the motor and intermediate shaft rigidly mounted, but still able to slide or pivot back and forth like we can now, but with proper rigidity and tension so we don't get all vibration we do now.

If I am to be honest, the former will probably be an intermediate step on the path to the latter. I do welcome suggestions for either anyone has them.

It has been suggested I get a new set of felts. Are there any particularly recommended vendor who offer felts already cut to size? Or should I perhaps just buy a large sheet of material and cut them myself, using the existing felts as templates?

I thought I had more photos, but I'm almost out, and I don't know how interesting the remaining ones are. Is anyone wanting photos of any particular part or detail of the lathe?

This looks like a grand old lathe! Your 1927 model has many similarities to the 1935 model I am restoring.

Regarding the felts, I think there are kits that can be purchased. When I looked around though, it seemed the kits were for smaller lathes, and I wasn't sure if the felts would be the correct size. And when I looked on McMaster Carr, the thickness they were selling didn't match what I had. Furthermore, it appears that felt comes in various weights. I wasn't sure what the weight was on my original felts.

I ended up taking mine and "washing" them by soaking them with gasoline and acetone and then scrubbing them to break up any old oil. Finally they turned from black to their original grey color and I made sure any small specks of metal were removed. I then tested their ability to wick up oil by putting one end in a small puddle of oil and ensuring there were working properly.

johnoder said:
Practically nothing since the 11 is a series "O" and the later ones referenced are not

Not even close enough in the most important dimensions that it could be made compatible?

I mean, I have a functional lathe to hand, complete with a 3-jaw chuck, 4-jaw independent chuck, face plates, dogs, centers and even a vertical mount for the compound slide. I also have a vice and rotary table. While setup would undoubtedly take a while, with only that, I imagine I could accomplish some measure of machining that could force a part into sufficient compatibility if it was already close enough.

There's a meme that's floating around on the Internet, which goes as such: "When all you have is a hammer, everything is a nail. When you have a welder, everything is whatever the f--- you want it to be.". Doesn't a functional lathe open up those possibilities yet further?
A

This guy sells the felt kits along with a book that you will want your hands on if you ever want to do any work on your machine . Not sure this is he right kit for your lathe but you can contact the guy & fin out .
Amazon.com: South Bend Lathe Rebuild Kit - 9" Model A, B & C : Tools & Home Improvement
animal
You must log in or register to reply here.