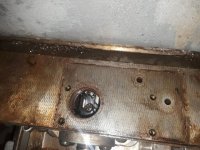 I'm retrofitting an early CHNC and Ive got the lathe doing almost everything its supposed to.
I removed the air powered lube box and wanted to fit a Bijur pump to the vital organs. It appears that someone had removed the manifold that used to send oil to the x-axis ballscrew and the ways. The pictures show the shadow lines where this manifold was probably mounted. The photo is the underside of the x-axis at the rear of the machine by the z-axis positive limit block.

Does anyone have a photo of what is missing? Or what the hole layout might be? I'm going to assume that anything threaded is probably a fixing screw, but I dunno for sure. Maybe the block is split with a pressure oil feed on one side and a drain reservoir for the ballscrew on the other?
It's a longshot, I know. But maybe someone has pulled or cleaned out one of these and knows what's what..

Or maybe has an idea where I could get one? 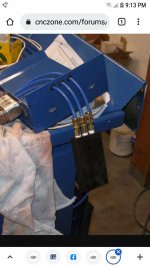 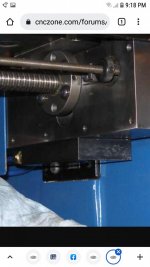 I found a couple of photos of another retrofit showing the part. If anyone's got a picture of the reverse of the block showing the galleries, that would be very helpful.
You must log in or register to reply here.

Hardinge Conquest T51 X-axis hardware overtravel - my fault, but how to recover?