A while back I saw a 75ton Dake press on Craigslist with a cutout in the front of the table. I thought that was weird and not a good design at first, then, as things tend to do, I decided I needed one because it was a cool idea and hard to find

I forgot about it for a few months, then I was searching for something else, and ran across a couple similar ones in an auction in South Dakota last week. I forgot to watch the auction, and missed the sales prices, but that sent me down the rabbit hole of trying to find more info on these presses and I keep running into a dead end.
Here's a pic 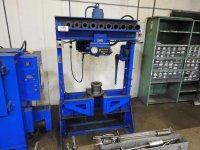 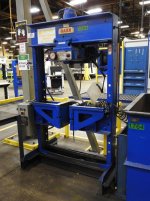 The model on this one says 5-022, but I can't find any information on that model, nor any references elsewhere on the netterwebz.

Dredging through the internet and Vintage Machinery, I see Dake does offer "open front" option for their smaller 10 ton press. I tried searching that to no avail. Anybody know more about these "open front" press tables and if they were offered on anything other than the 75 ton, or from any makers other than Dake? Anybody have any good intel on a different or correct model number, or what the option may have been called on the larger presses?

Yep, or for L or U shaped pieces that don't fit between the front and back plate and you need to press something near the bend, etc.

Like I said, I thought it was a bad idea, until I thought about it, and realized it was a great idea

Why don't you call Dake and ask them? I ordered a rebuild kit for my 50 ton press and they were very helpful on the phone.
You must log in or register to reply here.