I’m interested in buying a FP1 (just as an amateur) and found a guy selling a dividing head from what he says was a copying deckel mill (probably a KF but he doesn’t know the model) that he had to scrap.

The head has a “plate” that looks different from anything I’ve seen from Deckel. Looking at the deckel manuals and brochures, I can only find a similar plate used to generate geometrical paths in the pieces of the copying machine.
It’s not only the plate, the dividing head itself is different from what I am able to find in the deckel manuals for the FPs or the engraving-copying machines.
The tag seems to say KVR, but can’t find anything by this reference either.
Do anybody know what type of head is it? And iF is possible to change the original “chuck” by a 3 jaw chuck or a faceplate?.

Thank you very much! 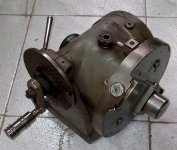 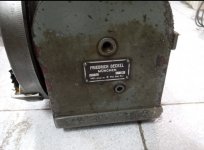 C
Help identifying the version of my FP1 vertical head