Help with a Turret Lathe

Reposting from the W&S section to get a little more traffic.

Just picked up a Warner & Swasey No.2 (M-1330) turret lathe in reasonably decent condition. Yes, I know it's a dedicated turret lathe and can't be converted to an "engine" lathe- I have two other engines and a (admittedly homebrew) CNC.

The turret will be used for short-run production and the occasional second-op. 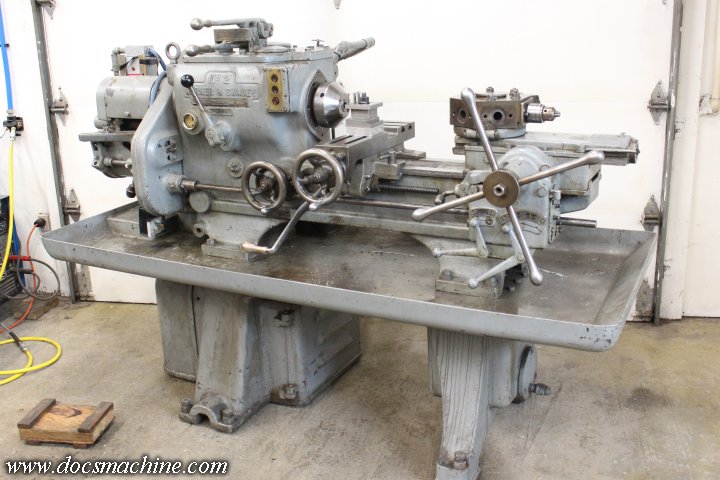 With that out of the way

I have some questions about this thing, with the first and foremost being how does this collet system work? 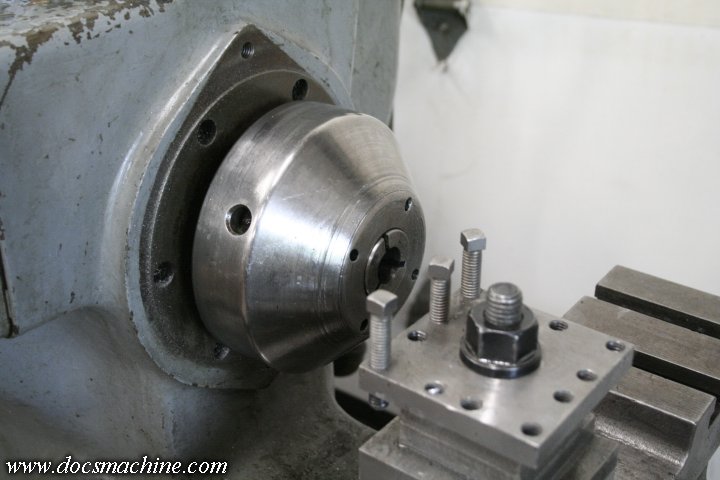 And under that is this insert unit, which is presumably pushed forward by a tube inside... 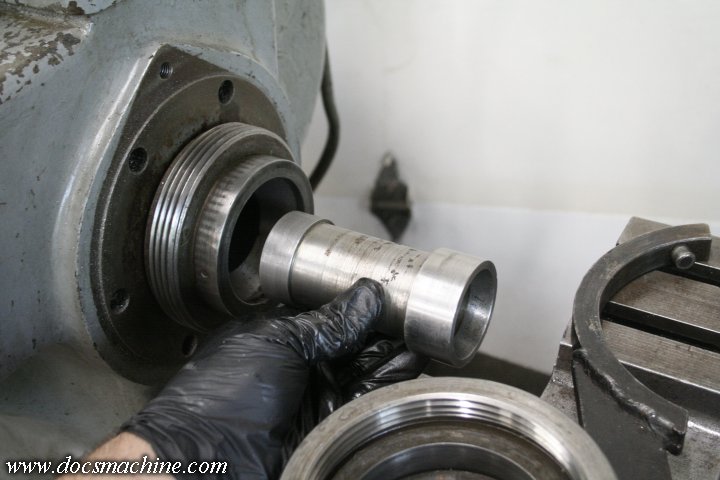 Which pushes these collets closed: 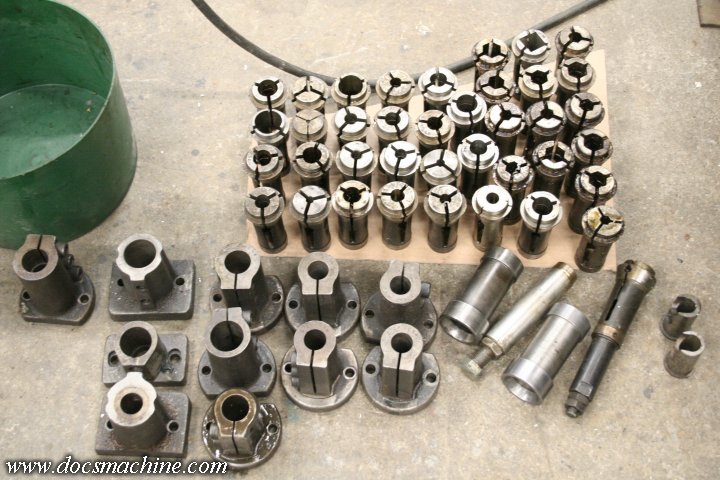 Looks like it acts as kind of a "dead length" setup, but that type of collet is not shown in any of the W&S tool catalogs or the service manual that came with this thing. Anybody know? Some are threaded- you can see a couple have internal extended stops- but most aren't. 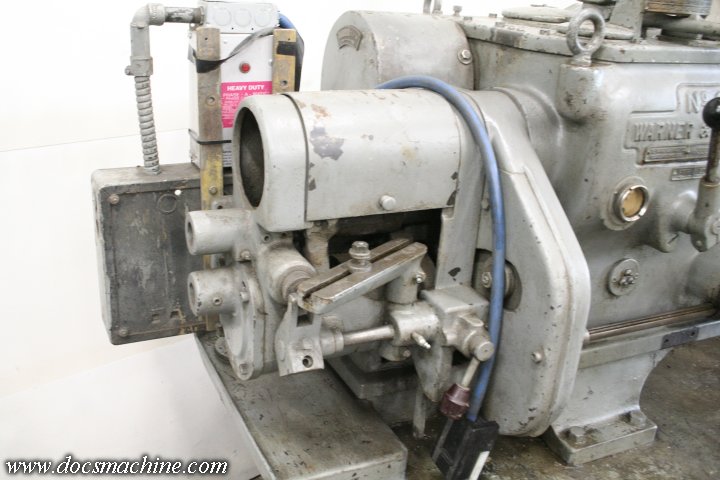 Note the bare patch down to the right- according to the manual, a linkage went there, to what might have been some kind of... power collet closer? Maybe? The manual conflates the collet and bar feeder systems- of which there's apparently several of each, so it's hard to get a grasp just exactly what I have, or am missing.

A handle with a chrome ball came in the box of miscellaneous, and the only place we can find where it might have once gone, is this badly wallowed-out hole in a linkage under the hinged cover.

But with the handle in place, the cover can't be closed, so that can't be right.

There should be a long hollow tube inside the spindle that pushes the "backup" piece of the collet chuck(you have in your hand).....the tube is pushed in from the back by the "L" shaped levers you can see in the rear of the spindle .....to adjust the setup ,the whole cone/lever/etc assy is usually threaded and screws along the spindle,or extension........Far as I know this is an Alfred Herbet type of thing,as are that type of collet.........I dont have a W&S,so cant be more specific.....however ,the cone /shift mechanism etc,must be easily operable from the "standee" position and will have either a long lever across the top of the machine,or a linkage ......think yours had a linkage.......Some kind of bar feed fits behind all that ,the short bar feed is the best for small production......................In short ,the chrome knob must be wrong,as no way could you work it a hundred times an hour...efficiently.

There should be a long hollow tube inside the spindle that pushes the "backup" piece of the collet chuck(you have in your hand)
Click to expand...

-That's basically exactly it, but I can't see the mechanism that actually causes that tube to push.

The lever, misplaced as it probably is, moves the curved-cone thing back and forth, and that moves those roller-tipped arms, but all that seems to do is move some... clamping jaws of some kind, at the extreme left end. Presumably part of the feed advance mechanism, but unless I'm missing something, that seems to have no connection to the inner tube assembly.

I may have to start pulling things apart for a better analysis.

There is an older thread about Warner and Swasey Turret lathes here
Warner & Swasey - Getting The Most Out Of Your Turret Lathe
There is a copy of the 1940 edition on line here , Turret lathe operator's manual. - Full View | HathiTrust Digital Library | HathiTrust Digital Library mine is a 1951 edition .
It is not an operators or parts manual for your machine but may be of some help .
There are other Warner and Swasey publications on archive.org and hathitrust.org that may also be useful .
Regards,
Jim
A

That collet system was originated by Brown & Sharpe, and adopted by other production lathe manufacturers. It's a dead length system (hence the lack of draw-in threads) and usually used in conjunction with a bar feed. No 21 is a common series, but I think there were several, each with a different maximum capacity

Congrats on the new toy. Quite a few "Swasey" threads in General. Search titles only.

I'm sure that handle doesn't go there.
Here's the system I'm familiar with on a slightly larger machine. The long lever pivots down low and rotates a shaft through the base of the headstock. Inside the bottom of the headstock there is another lever on that shaft. That lever pulls a rod which operates a pivoted link. You can see those 2 links in this photo. That pivoted link moves the bulletnose shaped collar to move the closer levers. The collar threads on the shaft for adjustment to get the levers in the collar to just the right position in relationi to the closer tube to put the correct pressure on a collet when it is closed. Your machine must work in similar fashion with different size and shape parts some of which are not shown in the photos. Sorry I can't help with the #2 specifics. What does that big lever out front under the carrriage do? What moves when you move that lever? 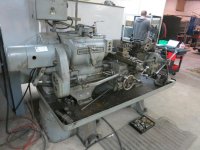 The bar feed operation is a secondary connection to those links which ratchets when the big lever is pulled and pushed. You don't have that so don't worry about that for now, the closer will work fine without the barfeed in place.
I hope this is a little help
J

The "short " bar feed is a handy attachment......it doesnt have the 20ft long tube of the long feed,and is generally no more than 6 ft out the back ,or less.....I think the slotted fork on the rod coming from the housing directly below the long T slotted bracket may be part of the collet operating system.

texasgunsmith said:
[...]but with a power fed turret tail stock, was thinking they could be real handy for drilling and boring, they'd be better at that than an engine lathe. And as a back up to an engine lathe. Any thoughts on that ?
Click to expand...

-Yes, and yes, it is. I haven't yet used a power feed turret, but I can say my previous machine to this, a converted Logan, was very handy for drilling. My little lathes' tailstocks only travel about 2-1/2", while the Logan does closer to 5", and this W&S more like 6"+.

I used to keep drill chucks handy on my old one, between production jobs, specifically for deep drilling.

Boring would, I assume, be equally useful, but I'm not as sure it'd be as worthwhile to swap your workpiece to a different machine for it.

May be of some use as to lever. All from mid thirties 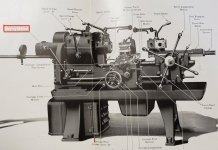 No. 3 no lever with chuck (no collets) equipment 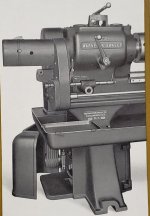 No. 3 WITH collets AND lever 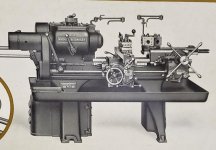 You will love it when you do Doc

Jim Christie said:
There are other Warner and Swasey publications on archive.org and hathitrust.org that may also be useful.
Click to expand...

-Thank you. I've had The W&S "Operator's Manual" for a while, it was very useful in getting my Logan turret up and running. I also have the original Service Manual for this particular machine- which I must say goes into impressive detail on all the inner workings, and several versions of the W&S "tools" catalogs, inluding the PDF version Limi recently posted.

The service manual does, I think, show the mechanism for the collet closer, but it's part and parcel of the bar-feed mechanism, and I think may have been an optional powered closer/feeder, which is no longer present.

I may have to take the thing apart, and figure out how to retrofit it to a manual linkage of some sort.

Finding the turret/capstan "boxes" and toolholders is a lot harder than finding a lathe with a couple of home made boring bar holders on the hexagon.......Most English lathes also had an overhead guide bar which fits bushed holes in the turret tooling ...this assures that alignment will be correct ,even if the hex indexing is a little worn....Unfortunately at one time this tooling was favoured foundry scrap ,an I must have scrapped hundreds of tons of the stuff.....collets are also problematic here,as we have changed to metric bar,and that type collet wont hold off size bar.....Mine has a Pratt "Multisize collet"..not as robust as the 3 piece type,but holds any size bar. The other one has a Herbert air operated hollow spindle chuck with slotted jaws for soft inserts.

Andy FitzGibbon said:
That collet system was originated by Brown & Sharpe, and adopted by other production lathe manufacturers.
Click to expand...

-Exactly right. After closer inspection and cleaning some of the dried-up cosmoline/grease/schmutz on some of these collets, they say right on them "22SC". Hardinge lists them, at typical Hardinge prices, as for a B&S screw machine, plus there's a bare few on eBay. I have something like 39, including an unmachined, presumably "emergency" style example, so I'll need to check through those for size and condition before I go buying any others. (And it's unlikely I'll ever need, like, a 7/64ths, so it's not like I need a 'full set'.

This example must have been either special-ordered this way, or retrofitted later.

Mud said:
Inside the bottom of the headstock there is another lever on that shaft. That lever pulls a rod which operates a pivoted link.
Click to expand...

-I have a little dangly link, and a little link/shaft connector thingy that came in the parts box... 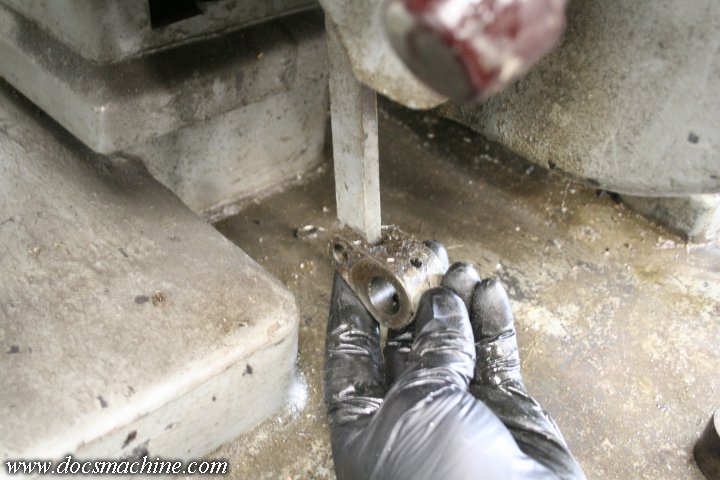 And on further reading/investigation, the chrome-ball knob/arm go to the shaft that actuates that linkage, which IS, in fact, a motor-powered combination collet closer and bar feeder.

Which means that yes, I'm going to have to figure out how to actuate all that manually. The linkage does do something manually- maybe unlocks something? - but the diagram sure makes it look like the motor does all the grunt work.

john.k said:
Most English lathes also had an overhead guide bar which fits bushed holes in the turret tooling ...this assures that alignment will be correct ,even if the hex indexing is a little worn.
Click to expand...

-Yep. This one has a machined pad right above the spindle at the top of the headstock, that's intended for an overhead guide bar.

Never seen one for sale, though, but I could make one if I felt the need for it. The example photos in the Operator's Handbook sure make extensive use of them, though, but then those guys are making multiple-cutter passes on giant castings on a big 3A or something.

This turret seems to lock up pretty rigidly, and seeing as the vast majory of my parts will be aluminum or even occasionally Delrin, I doubt I'll need the extra support.

There's a LOT of stuff that was made all those years ago, that got scrapped, either because people just didn't need it anymore (and really, who needs a "fully tooled" turret lathe these days?

) or there came a time when no one knew what it was anymore.

Take those guide bar castings off the machine, and very few people could identify them.

On recommendation by John and others, I picked up a couple copies of the W&S 'tools' catalogs shortly after I found this lathe. And there's a hundred bits in there I've never seen for sale, despite frequent searches for turret-lathe tools ever since I put my Logan together.

The vast majority of all that stuff has very likely long since gone to the scrapyard.

Me too, on several painful occasions, especially on the bigger lathes. Just sliding the bar out the back won't work either if you forget and go looking for something around the back of the machine.

Regards Tyrone.
You must log in or register to reply here.