Recently rediscovered this photo and thought I'd see if anyone has come across something similar before. This Hendey was one of two that were at an east TN auction several years ago. As far as I know this lot went unsold and I've not been able to find out what happened to it. Only one photo was provided and no serial number was listed. The other lathe that sold was your typical later T&G with standard motor gen drive.

The lathe itself looks to be a standard 9x24 tool and gage model. What I find interesting is the lathe's drive system. It looks to be a motor/gen drive but it's different than anything else I've seen published. There's a small lever next to the push button station, the tags are hard to read but I believe they say GEAR and BELT. Yet the lathe itself has the typical large lever for shifting between gear and belt drive and is still labeled as such. There is another lever next to the speed rheostat that looks unmarked. Perhaps the on/off switch? Headstock casting has the boss for where the switch lever should be but it's not machined. Lastly the speed rheostat appears different to the typical one seen in published literature.

Does anyone own a Hendey with this drive cabinet handle layout. Hendeyman do you have anything to add? Mostly looking to satisfy my curiosity here. 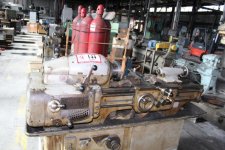 This lathe represents the first of the post WW2 designs introduced in 1946. Another design was introduced in1948. This lathe would be the standard 9 x 24 bed, the last of the 9 x 18 beds was completed at the end of 1945.

Thanks Hendeyman. I was only familiar with this style of panel.

This is from lathe #36909 and I've seen several others that are similar. But never one like on the first pic I posted with the extra levers on it.
You must log in or register to reply here.

D
I Would like to get information on this Hendey lathe that is in an auction.

Apr 8, 2022
shapeaholic
S
R
Just purchased a belt drive lathe no idea who made it