Punch - every time.
B

There’s punches and punches, a parcsel mini die bench could blank holes to really close toll, a Whitney hand punch is ok for a round shaped hole, but it lacks close die clearance and adequate stripper, a laser may be your best option given the number if you can tolerate the HAZ . I’ve had accurate stuff edm cut before now
It wasn’t that expensive ( it was a big stainless shim with grease ports)
You may be stuck with drill and ream if other methods aren’t available, make a good jig with guide bush and index pin
Mark
N

Okay, punch it is.

Now, a hand operated tool seems to be the best option as alignment and holding of the lower die in the drillpress setup would be an issue for me here, unless there are solutions for this? I do like the idea of setting up a fence to allow reeatable punching of multiple pieces without layout and center punching.
B

Bottom die should live in a bolster, aka block with a hole
That gets set to the punch, not usually the other way round,
Mark
( posh ones use a very tight setting punch without clearance, replaced with the punch tool once set or registered
Mark
M

Depending where the holes are locatedin the material a Uni-Punch frame would be the ticket.
Easy to source on "bay and the punches/dies from Unipunch are not expensive.
R

If the choice were only between drilling or punching. I would punch. However there are more choices. For 180 parts I would look at using the laser.

There is a direct relationship between price of tool and amount of cleanup afterwards. For a measly 180 holes, I would just be drilling them, with a plywood backing table, and expect to have to debur/sand the sheet, and, possibly, flatten it a bit if the drill bit isnt really sharp.
Punching is certainly do-able, and I have a 24" throat 10 ton whitney bench punch with a table that I can clamp jigs to get repeatability. But a punch like that is a grand or two these days.
I have a Whitney no. 5 junior hand punch, and have certainly punched hundreds of 1/8" holes with that in material ranging from 26 gage to 16 gage. But the throat depth is only something like 3". It does have a depth gage, and its repeatability is pretty decent. It may, again, require some cleanup afterwards.
Certainly sending it out for laser cutting would probably give you the best accuracy, but would cost more than doing it yourself.
What you really need is a nice vintage Strippit 30/30.
Here is one on ebay for only 4 grand. 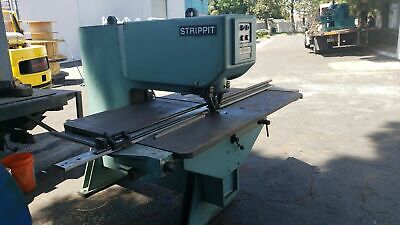 rogertoolmaker said:
If the choice were only between drilling or punching. I would punch. However there are more choices. For 180 parts I would look at using the laser.
Click to expand...

Whilst I do, and always have enjoyed chasing dancing pixies, I shall keep those in the visible realm.

I got a hand punch with a bench mount plus a "willing" apprentice.

I have a hand punch which will easily do 1/8" in mild steel and aluminum alloys (you don't say what your alloy is). But I would not want to subject my hand to 180 punches with a hand punch. At the very least, I would plan on three or five sessions with a couple of hours between them: probably a two day job.

However, the longer and easier stroke on the handle of an arbor press or either of my drill presses would make that repeated motion a LOT easier on my hand.

This is the kind of thing that an arbor press is made for so that would be my first choice. And you do not need a very heavily rated press for 1/8" holes in 1/32" mild steel or aluminum. My light arbor style press if a fugitive from the electronic industry where it was used to attach small terminals to PC boards and close TO style cans on experimental semiconductors. It will easily do 1/8" in most 1/32" materials.

As for attaching the die, that is easy with a simple steel plate (1/2" thick) with three holes. One hole for the die and two for cap screws in counter bored holes to attach it to the press. Before tightening the screws, lower the punch into the hole in the die and with it there, tighten the two screws. Test carefully and adjust if needed. After that neither the die nor the punch should move sideways so you can punch hundreds of holes with no further set up.

Yes, you do need to drill and tap two holes in the press. Live with it. They will come in handy for more things.

Most of the punches in commercial die and punch sets are hardened and have a center point for aligning it with a center punch dimple in the work. This can be used to mark the location of the die hole in the steel plate after it is mounted with the two screws.

The drill press could be used in a similar manner. Most drill press tables have mounting slots so you do not need to drill and tap the table. Even my cheap, bench top, import drill press can be used in this manner and maintain the accuracy needed for punch/die alignment. But I would probably use my floor stand drill press if I took the drill press route.

As for drilling those holes, if I were to do it that way I would use a step drill. With a carefully adjusted depth stop on the drill press it will debur the top of the hole in the drilling operation. Then the part can be flipped over and, with the same depth stop setting, the bottom of the hole can be deburred. One set-up and you are done. I have done thousands of holes in sheet metal this way.

With the punch the top of the hole normally will not need to be deburred. The bottom may or may not depending on how much of a burr can be tolerated.

What I usually consider for a job of this type is the distance of the holes from the edges of the part. A hand punch has a very limited throat, around 1.75" or so. There are models with deeper throats, but around 3.25" is around what you will find. Bench mounted models will have deeper throats. Arbor presses will have a variety of throat depths so you need to look at that spec when purchasing. My small, bench top dp has about a 4" throat and my floor stand dp a 10" one. I have had to do some parts when none of the above would serve and had to use a hand held drill. This distance from the nearest edge is how I usually choose the method of producing small holes in sheet metal. So far I do not see this number being discussed.


thermite said:
Making a problem out of a solution?

You need things to stay where you place them as they cycle.

No 'proper' press, no die-sets?

The drilpress becomes the fixed frame.

Your "lower die" is not left to float about. It is aligned so the punch hits the hole dead-nuts.

Then it is clamped. Punch cannot be moved.. unless it is a radial drillpress? Even so, just lock it.

Go figure the expectation is it will remain aligned to the punch, hit dead-nuts, second and subsequent cycles, too.
Click to expand...

Y'know, 180 holes in a sheet metal part sounds like an hour or so's work with a hand held air drill and a 1/8 bit. I used to do aircraft sheet metal as part of my living, and that is not really a lot of holes.

Know anyone with a Roper-Whitney c-frame punch? Again, short work, once layout is done. Provided this is holes along an edge, or withing reasonable distace of, which it sounds like, given you were considering a hand operated punch.
You must log in or register to reply here.

M
tooling for repeat punching of holes accurately on Ironworker
2