Dear moderators, if I made a mistake in the section, please move this topic to the most appropriate place. It seemed to me that there are most people here who might be interested in this.
Hello dear colleagues!
For the last 2-3 months I have been slowly installing a laser tool gauge on our horizontal milling center Mazak FF-660. I thought that many people would like to put such a thing on a car, but, like me once, when they think of the word "laser", they think of something unrealistically complicated. I hope my story will dispel some doubts.
And so, a brief background. We bought a used horizontal machining center with a spindle speed of 15,000 rpm and an automatic pallet changer for only 25,000 euros! I consider it almost a gift, considering that it was in full working order. Of course, then many "nuances" were discovered - the lack of documentation (we never received it in full), a coolant pump through the spindle, a rotary union for supplying coolant through the spindle, etc. But the biggest problem was that there were no probes on the machine - no probe in the spindle, no tool presetter.
And if we need a spindle probe almost exclusively for the convenience of work, then a tool setter is a guarantee that the operator will not be processing 10 copper billets at a cost of $ 100 each with a broken cutter at night. This has already happened on our vertical machine, and I strictly ordered the technologists to mandatory check all tools with a diameter of <4mm before the tool enters the tool magazine. Therefore, the instrument presetter is a very important thing for us.
After I fixed all the main components on the machine and installed all the parts that were missing on this machine, it was the turn of the adjuster.

I thought for a long time which presetter to put in the car. I worked very little with laser presetters about 8 years ago and then they were installed from the factory. Therefore, at first I looked towards contact presetters and even bought a Renishaw TS27R. But no matter how I put it inside the machine cabinet, I understood that either the spindle or the machine table would knock it down when turning the 4th axis. For a while I thought about a presetter that would go into the working area of the machine to measure the tool, and then come back, something like in this picture: 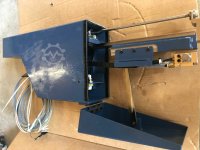 And at some point I decided - damn it, but the laser will solve all my problems! The emitter and receiver are located outside the movement zone of the spindle or machine table. The laser will allow you to measure small diameter tools. And the laser will allow you to measure a diamond tool, which is very undesirable to measure by the contact method. In general, I decided that I would overcome my inner fear and decide to install a laser.
I bought a used BLOOM on ebay beforehand. It only costs about 850 euros.

In order to fix the laser emitter and receiver, I needed to make some kind of frame that would hold them. In fact, if everything is done as it should be, there should be intermediate adjustment platforms between the frame and the laser modules in order to set the laser tilt in 3 planes, and set the laser beam to coincide with the machine axes. But these regulators are quite difficult to manufacture, and the welded frame still needs to be quite rigid so as not to vibrate after fast movements. And this frame must be stable over time, not change its shape in any way. So I decided to just process the base pads on the frame with good accuracy, set the laser modules on them so that the laser beam hits the receiver, and then align the entire frame relative to the axes of the machine.

This is how the setter should look inside the car on the 3d model: 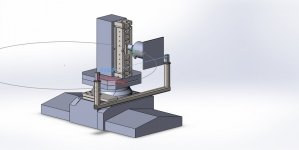 The blue dotted line is the laser beam

Laser modules will be attached to the blue areas, so they must be strictly parallel to each other and to the mounting plane on the part with many holes.
I was able to weld the frame myself, with welding something thick I have no problem when you can put the maximum current that the welder has

After annealing, it was time to grind the base pads. Here's what it looked like on a surface grinder: 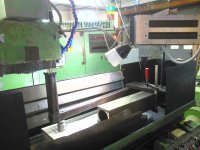 Despite the wall thickness of a square pipe with half a finger, it turned out to be surprisingly flexible! Therefore, I ground with a very small depth, 10 microns per pass in roughing and 1 micron in finishing passes. In the end, everything worked out.
After that, it's time to install the base plate on the bed, to which the welded frame will be screwed. Here's what she looked like: 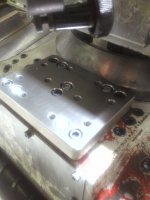 Black M10x1 threaded screws push the plate away from the bed, light M12 screws pull the plate to the bed. M10x1 screws rest against the frame for a reason, but through balls to compensate for deviations of the screw axes: 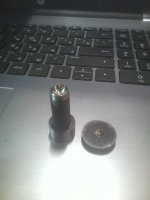 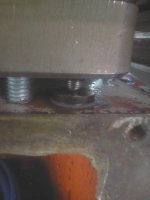 The base plate was set relative to the machine axes with an accuracy of 5 microns (0.0002 inches). After that, I installed a welded frame and screwed a laser emitter to it, just to please myself: 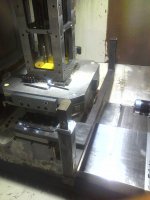 Then - the tedious work of pulling wires and pneumatic tubes: 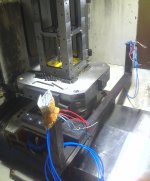 In the end, now it all looks like this: 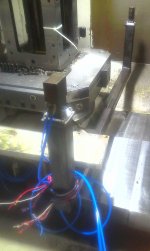 The installation is almost finished, next will be the connection of all this to the CNC. A kind person sent me BLOOM measuring cycles (and a ladder from the machine where they were used) for free, and I was very surprised at the logic of their work. Ladder doesn't process signals at all, just passes them from the macro, through the #10xx variables to the Y outputs. And passes the signals from the X inputs, through the variables, to the macro program. A very unusual solution, in my opinion, but it makes life much easier - you only need to write 10-20 lines in the ladder!

I, of course, will describe the next steps.
You must log in or register to reply here.