I'm buying a Jörg 50 inch 14 gauge shear. It looks like it's good quality, made in the Netherlands.


j c said:
I'm buying a Jörg 50 inch 14 gauge shear. It looks like it's good quality, made in the Netherlands.

The tensile strength of cold roll #4 temper sheet is 50000 lbs. per square inch.

I did not consider the shear blade angle.

I would reduce the tonnage by 25% to 30% allowing for the shear angle of the blade.

#16ga. is .059 X 85000 X The length of cut divided by 2000 equals the tonnage required to make the cut.
With this information it should allows you to make an educated judgement to shear or not to shear.

All The Best,
Roger
J

So the 304 .059 takes less tonnage to cut? That would be great. Should that be my only concern? I was also concerned about the hardness of it, and if it would damage the blades for some reason more than CR. I'm not that familiar with power shears - I've only had a jump shear - so I don't know what causes the blades to dull, break, etc.

Also after I wrote this I found a capacity tag plate online for the shear. I'll try to attach it. Basically it says 18 gauge SS... in Dutch! 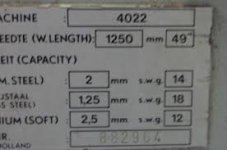 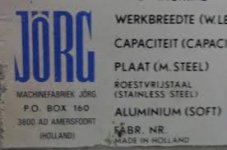 J
Would like some advice on purchasing a used shear.
2

How many strokes per minute is YOUR mechanical shear??
2