I just got my "new" S8 home this weekend, after a 800km roundtrip.
The lathe shows remarkable little wear, the ways are like new, all lead screws are in mint condition, only light surface rust some places.

The previous owner bought the lathe in the mid 70's and has never used it.
Before this, the late was lightly used as a tool room lathe.

It came with two three jaw chucks, one 4 jaw scroll chuck and a regular four jaw, backing plate, two live centers (Mk-5), dead center (Mk-6), two steady rests and one following rest.
Some of the chucks are a bit rusty, most likely having been stored on the floor. They do not show any wear though.

If anyone can help me identify what type of spindle nose this lathe has, it would be greatly appreciated..
I'll post a picture below of a chuck backing plate showing the type....
It has both an internal and external thread, but there does not seem to be any taper any where? 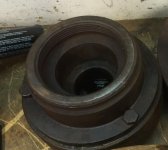 Your spindle is the same as mine ,good old fashioned threaded ,but with a lock nut to prevent the chuck undoing itself if you reverse the lathe. there is no taper ,location relies on the parallel nose.

I haven't had too many problems with mine but getting the chuck off the first time could be tricky ,first you need to undo the lock nut ,mine says on it which way ( it is in the same direction as the chuck but the locknut obviously moves towards the headstock) ,you then need to engage something radially in the chuck that can be hit with a big hammer while out of gear ,a small hammer wont do.

The secret is when you come to put the chuck back on do not spin it up to the shoulder ,just carefully tighten by hand and then screw up the locknut ,preferably with a suitable "C" spanner. You may be concerned that it will come off if not really tightened hard but I can assure you that I have had mine for nearly twenty years and the chuck has not come off yet.

I am jealous that yours has so little wear ,on mine the ways are pretty worn but it is still a pleasure to use ,have you looked in the gearbox yet ,the gears are a wonder to see ,even on my worn model the grinding can still be seen on the teeth. My machine was built in 1951 ,it is the only one I know of in the UK.
B

Thanks a lot for the input sable, both on the type of chuck (You don't have the specs/name on this type by any chance?), and the info regarding mounting.

I am sure removing the chuck is going to be a challenge. It has been on the lathe for the last 30+ years, and has not been removed during this period.
Hopefully it will come of with out to much "violence" :p

The gears are as new on this one as well, with the grind marks clearly visible. A few teeth show some signs of rust on the big gear on the spindle, but should "disappear" after a few minutes of turning I guess.

What kind of oil are you running in yours? After what I can find, it seems 46 cst hydraulic fluid with is used on newer Köping lathes. And I would think this should be suitable for this one as well.
You haven't by chance got a manual of this type lathe? Either laying around or on pdf?


I'll post some more pictures of the lathe, and the (sad) state it is in.
The paint is pretty much falling of in flakes (don't now exactly why), most of the machined surfaces where coated with tectyl before it was stored, so these are very gunky and look like hell.
But it seems the tectyl has prevented corrosion well. Should clean off with a little elbow grease. Hopefully after a coat of paint it will look a bit better.

Here are some photos: 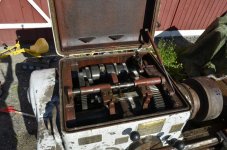 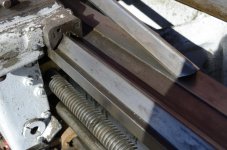 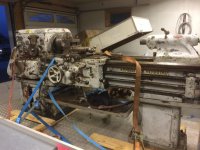 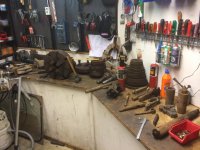 So, time for a small update on the Köping.

Have finally had the time to take a closer look in to the state of things.
Pulled of the cross slide and apron today. Litle to no wear across the board.

Also removed the back plate for the four jaw. This chuck has been sitting on a concrete flor, and has some serious corotion issues. Put it in a electrolosis bath for 6 hours. Cleand up most of the rust, but need a few more hours to clean up the worst parts. Hopefully it is not to far gone..

Took a litle shot at paint removal as well. Should be easy enough to remove the old flaking stuff.
I like the colour, so it will probablee be repainted white..

Your lathe looks very similar ,strangely the paint is flaking on mine as well but is a horrible green colour (not original) I have 46 hydraulic oil in mine and it seems OK ,this has been in for a couple of years ,before that I didn't dare change the oil for fear of getting it wrong but it got low so I had to do something.

I don't have a manual for the machine but I think Tony (Lathes) can supply one for a larger model which I guess would be similar.

As to the name / spec of the spindle nose I have no idea ,as you said Kopings lathes usually seem to have an "L" taper and this is the only screwed fitting like this I have seen on any lathe or chuck. Apparently Kopings lathes are still common in Sweden so it may be relatively easy to find chucks local to you if needed.
B

I guess the paint has reached it's expiration date :p

Regarding the oil, I asked Storebro-Service in Sweden (who carry parts etc on these lathes nowadays).
And they confirmed that 46cst hydraulic oil is the correct oil to use on these lathes.
Storebro can also supply all parts as well as user manuals etc.


Had a good day in the shop yesterday.
Dismantled the cross slide and compound rest, took them outside and pressure washed them, before a thorough cleaning, oiling and reassembly.
Everything looks ok, some small wear lines where particles have rubbed on the ways of the cross slide and compound. But all in all it is minimal and far less than to be expected for a 66 years old lathe

The lead screws and nuts seem in mint condition. No visible wear on the screws, and minimal amounts of backlash.

Also cleaned and oiled the main lead screw, and feed rod(s). Almost no rust to be found, just a layer of old tectyl, oil and grime.
After cleaning they look like new. 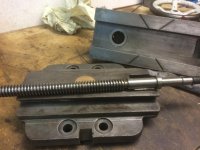 The only thing I have ever done to my S8 was to re scrape the compound .

As a matter of interest does yours have a grub screw in the side of the compound ,mine has one which goes into a blind hole ,so it has no effect on clamping the slide. I have never worked out what it is for and wonder if it should have gone right through to act as a clamp screw.
B

Maybe, is it located here? 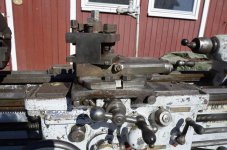 It's a mounting hole for a "stop" used to be able to adjust and quickly reposition the original tool post when rotating between tools.

Ah so that's what it is , the grub screw doesn't belong in there then. Well I have had that lathe for nearly twenty years and now I know. Mine has a Malcus quick change toolpost ,which works very well.
B

Glad I could help.

I need to get a quick change tool post as well. Just have to figure out which style I want.
B

Got some more work done on the S8 this weekend.
Pulled the carriage for a good cleaning, also assembeld the compound and topslide.
Even started stripping some paint of the bed. 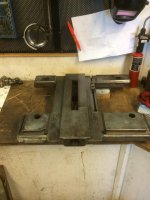 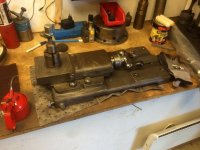 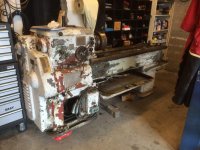 I own a Köping S8S 1953 that i've been cleaning and painting a bit.
Maybe you can use my thread on the Swedish forum "maskinisten.net" for some help. For an example i have made my very own "oil-felt-things" to the underside of the carriage directly from wool that i got from an local farmer in the village i'm living in.

I'm using an Altivar VFD for the lathe. Not completely finished with all the work, havent really been using the lathe yet.

Never thought of making my own felts and we have plenty of wool. Did you compress the wool or process it in any way ?
S

The process is called "felt needling". Search for felt needle on youtube and you will find instructions. I came up with the idea of making my own when i found out how much "Storebroservice" wanted for the original part... I bought the tools on the store called "Panduro" in sweden. I 'll write a small tutorial for you tonight. Or maybe i'll put a video on youtube.

Hi all, it's been a while since my last post I guess.

Thanks to Stefan for the pics, great fun to se a similar lathe, though I guess the S8S is a bit bigger.

I am sad to say that progress on the lathe has been slower than I hoped.
The time before christmas suddenly became a bit stressfull at work, as I had to take a 14 days trip on to an offshore oilrig in november. This in turn led to a backlog of work at the office. Leaving litle time for shop work.

I did however get to spend some quality time in the shop during christmas, and have finnished stripping the paint, and I have started painting.
I also started work on a jib crane, that will be needed to re-assemble all the heavy parts on to the lathe.
It will also serve me well when needing to change chucks in the future. Eventhough I'm only 29, my back does not love lifting heavy stuff of the flor.
B

So I got some work done to the jib this weekend. 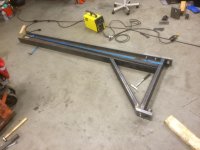 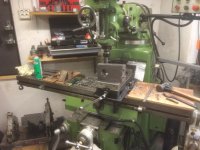 It is made out of a 2,5 meter IPE200 beam as the main beam, and 50x100x5mm rectangular tubing.
Hinges are machined out of 30mm plate. And 32mm hinge pins in grease bushings.
It will be wall mounted and will serve the lathe, mill and work bench.

The paintjob on the lathe is coming along, eventhough I hate painting 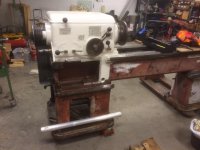 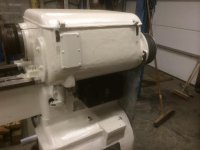 Promised to make a movie about the felt needling. Sorry, cant find the tools anymore... It`s pretty easy. Find a tube thats maybe 2-3mm larger than the hole that you are finally going to put the felt in. Use the tools to make a hard felt cylinder, put it in the lathe and just cut its shape with a razor-blade.

Promised to make a movie about the felt needling. Sorry, cant find the tools anymore... It`s pretty easy. Find a tube thats maybe 2-3mm larger than the hole that you are finally going to put the felt in. Use the tools to make a hard felt cylinder, put it in the lathe and just cut its shape with a razor-blade.
Click to expand...

Don't worry about it Stefan , if I ever get around to it there seems to be quite a bit of information out there ,before your post above ,the idea had not even occurred to me .

Regarding the way oilers..
I just bought some 1" wool felt polishing wheels of ebay. Paid 15$ including shipping.
3" 80mm x1" 25mm Thicks 3 Pieces of Polishing and Finishing Wool Felt Wheel | eBay
You must log in or register to reply here.