Looking to purchase the above referenced belt sander with a
2 x 48 belt. Anyone have one and what is your opinion? Is
the belt quick and easy to change ? Thanks
A

Haven't used one of those, but the Burr Kings are pretty tasty. Quick belt changes.
B

You might want to look at Beaumont Metal Works Knife Makers Grinder, and uses a 2 by 72 belt.
See https://active.boeing.com/assocproducts/surplus/ItemDetails.cfm?auctionID=1166&pageID=m43402
I have one and really like it. I have no other affiliation, but think it is the most versitile grinder for the price.
M

Can't remember his name, but the guy who manufactures the Beaumont Grinders is a regular contributor here on PM. He's posted several links to some good YouTube videos he's made of the grinder in use and also vids of the production of various parts for them. Maybe he'll see this thread and check in.

All that said, I still kept it and use it. It will give a very nice finish, but just isn't as nice a machine as the Burr King.

Thanks for the info. We too have a Burr King, and find it top notch. Looking at the Kalamazoo for another area of the shop.How quick and easy is the Kalamazoo to change the belt?

I have a 1" Kallamazoo sander mounted on the back of my engine lathe. If the 2" model is anything like the 1" model - changing the belt is a non-issue. Just a plastic knob to loosen by hand and press the shaft in against the spring pressure and the belt falls off.

The Kalamazoo 2 x 48 belt is pretty easy to change, you just open the side shield, lossen one knob, push the upper wheel down and pull the belt off.

The downside is the way the tracking system works... You turn the same upper wheel you push down to the left or right to track the belt, so when you pull the old belt off the tracking goes completely out of whack. You can adjust it back easily, but the Burr King belt change system is better.

Good machine for the money

I have a 2" Kalamazoo. For the money, it's a pretty good machine. Not a Burr King for sure. Belt changing is pretty easy. I also have the 1'' model, and it's very handy.

I have a 2 X 48 and 6 X 48 Kalamazoo. Easy enough to change the belt, lots better than the no name imports and made in the USA in Michigan. Not as good as burr king though.
H

I know this is some years later but you don't happen to have any pictures and a model # for the Kalamazoo sander your talking about do you?

I've had one for a while now that they let me have from the shop at work, what you are describing sounds a lot like whats going on with it and I'm finally getting around to trying to get it backup and running.

I'm trying to find parts for it and I can't find a picture of it anywhere.
B

hogleg64 said:
I know this is some years later but you don't happen to have any pictures and a model # for the Kalamazoo sander your talking about do you?

I've had one for a while now that they let me have from the shop at work, what you are describing sounds a lot like whats going on with it and I'm finally getting around to trying to get it backup and running.

I'm trying to find parts for it and I can't find a picture of it anywhere.
Click to expand...

Is this the machine your talking about, if it is you can call the manufacturer? 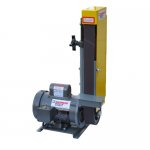 A while back I was wanting to build a dual head 6x72 horizontal sander, I called Kalamazoo, talked with the owner I believe, anyhow he was a real down to earth helpful kind of guy. I would think if a guy had a problem with anything they built, regardless of age, he would help you get it going correctly again. As things turned out I found a real nice ski grinding machine I will use for my project but I would not be afraid of anything Kalamazoo makes simply because of the fact that there are good people to stand behind it. That being said I have 2 Burr King 2x48's we use, I believe them to be a better built machine overall. My second one showed up with a cracked, bent base and I never was able to get Burr King to replace the broken part, I'll not buy another thing from them.
J

I have an old 2 x 48" Kalamazoo belt sander that I bought as a basket case. Had to make a new drive wheel, but after that, it works great. It came with no belt guards and that has not been a problem. Good luck.

About 20 years ago I copied a Kalamazoo and built it in an afternoon. I used scrap material from around the shop and an 8” bench grinder (on the other side I mounted a 3M deburring wheel). Only thing I had to buy were bearings for the top idler wheel. My boss swore it was never going to hold up because I used open bearings (I was poor).

It has run nearly every day for two decades without a hiccup. It’s not as nice or as safe, but not so much so that I’d change it.


Sent from my iPhone using Tapatalk
You must log in or register to reply here.

P
Why do 6x48 belt sanders/grinders for metal seem uncommon?
2

B
Quick way to run a nut down all thread rod.
2