I am brand new to hobby machining.I have a hobby vertical mill and have been experimenting with a project.I have not been able to find the cutter I think I need to do this operation. The closest I have come is the cutter in the picture.

I altered it with a large drill and a bench grinder. Not precision work but I had to start somewhere. I need a 10 degree angle on the cutting surface as shown. With the cutter I altered, I was able to make some experimental cuts in aluminum stock but my alterations dull the cutter, rounds the cutting face and the angle is not perfect. The actual operation will be on steel so I would like to buy some cutters made correctly like this. Any ideas? 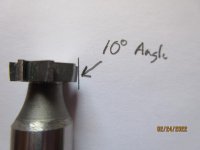 I am brand new to hobby machining.I have a hobby vertical mill and have been experimenting with a project.I have not been able to find the cutter I think I need to do this operation. The closest I have come is the cutter in the picture.

I altered it with a large drill and a bench grinder. Not precision work but I had to start somewhere. I need a 10 degree angle on the cutting surface as shown. With the cutter I altered, I was able to make some experimental cuts in aluminum stock but my alterations dull the cutter, rounds the cutting face and the angle is not perfect. The actual operation will be on steel so I would like to buy some cutters made correctly like this. Any ideas?
Click to expand...

There is a lot more to it that this. Better to just buy such things.

Good sized cities usually have a sharpening or grinding shop that can sharpen end mills and such. A common job for such shops is to modify standard cutters to suit a special job.

It would not be impossible to put a grinding wheel on an arbor in a vertical mill spindle, mount the appropriate Woodruff keyseat cutter in an indexing head set to the desired angle and create the cutter you want. A grinding shop would be able to do the job quickly and possibly for an attractive price, especially if you have several cutters done at once.

Or, is it possible you could use a tapered end mill, which is a stock item?
https://www.mscdirect.com/browse/tn...d+mill&refinements=Taper+Angle+Per+Side:10.00

Dovetail cutters are stock items, but probably not with the angle you desire.
https://www.mscdirect.com/browse/tn/?searchterm=dovetail+cutter&hdrsrh=true&rd=k

Thanks so much for the ideas! I will check into a "sharpening or grinding shop". Should I search under that term exactly? Here is a more specific diagram of what I'm trying to do. I should have posted this earlier.

You may or may not find a cutter sold that way, but it won't be easy I'd guess. The easiest way for you to find a local tool & cutter grinding shop that could do that for you would be to call around to your local machine shops and ask them if they know of one. You could try a big-name national tool grinder like Harvey but that would probably be expensive.
T

If you don't have a lot of parts to cut, a flycutter would also do the job. A single tooth so you don't have to get all the edges identical. And, since it's easy to futz with you can grind your cutter, try it, whittle again and zero in on what you need.

The proper way to grind such a cutter is to spin it against a wheel to get a Circle Grind land around the OD at 10*.. then with each tooth on a tooth rest finger add/grind clearance up to a sharp edge for steel, and perhaps a secondary clearance.

It is a very easy sharpening task..good to find someone using standards and send a dozen or so that you purchase used/dull to a grind shop.

I worked in a shop where they were sharpened only once and then went to the dumpster.

Most often they are run between centers so to run with a low tir.

A little tricky would be to angle grind the OD of a surface grinder wheel at 10* circle grind. Perhaps run just out of a V block if not having a spin index or work head. Then rotate about .080 radially and come back with the wheel to grind up to sharp.
L

Here is a photo of the part involved. You can see that the O.D. of the cutter is critical, and that dimension has not been revealed.

Thanks for the feedback. Could you advise on the proper terminology? What exactly am I looking for?
M

Sorry I'm a newby "dimension has not been revealed" what does that mean?

RE Larry: "You can see that the O.D. of the cutter is critical,"

The depth makes the desired feature/shape on the part, so going that deep to specification what you see on the part is correct.

You might dip a radius gauge into the part to feel/get that diameter.
M

Yes, I've been experimenting on aluminum stock and it seems that OD is should be under .600 and not less than .550 or so.

As I recall the OD is not super critical, the edge of the slot is the important part. As long as the OD is close it will be fine. But a cutter grinding shop will be able to easily handle that. Using a flycutter you'd need to use care to set the diameter fairly close and be sure you have sufficient clearance. At such small diameter using a flycutter might prove difficult.
L

Mark Soderquist said:
Sorry I'm a newby "dimension has not been revealed" what does that mean?
Click to expand...

It means you have not posted all the drawings that describe the dimensions of the bolt slot in the cylinder and the tool required to make it.

I did find a reference that says the bolt slot (cutter width) is .152 inch. Still don't know the cutter diameter. It is not very critical to function, but is critical to authentic appearance.
Colt Single Action Army | Wisner's Inc

Did you know that there is a gunsmithing forum on Practical Machinist?
https://www.practicalmachinist.com/vb/gunsmithing/

Here is a Butte, MT shop that says they can do cutter grinding.
S&S Precision Machine - index

A fellow I worked with met an older lady who gave him a pair of commemorative Navy Colt that had belonged to her grandfather who was a Navy Admiral or some high rank.
I never saw them but in a two-gun box may have been like these
navy colts in two gun box - Bing
M

Ok, so I hope this doesn't get duplicated. I wrote a lengthy post that never showed for some reason. So I'll summarize now.

I took your alls very good advice and had some custom keyseat cutters made to my specs. I worked out the geometry on aluminum stock and then tried to cut a real steel revolver cylinder today. The HSS steel cutter I had made would not touch it but I had one made in carbide and it cut right through like it was aluminum. I need to do a second operation with an end mill and all mine are HSS and I tried and they would not touch the cylinder steel.

Question: Can I harden the cutters I have with heat treating so they can cut the cylinder? Would they need sharpened after heat treating? (beyond my cave man skills)
Should I order carbide cutters? Or other material?

I suggest learning how to use chisels and files before machine tools with complex cutters.

Also, sorry for the XY question, but remind me why we are cutting a keyseat with an angled bottom again?

my dad was in a quick draw club back in the late 50's. it was called the thumbusters one of the team members was the late great eldon

carl. here's a few pic.the team the timer and the rig its been over 50 years since its been fired but one day it will bark again 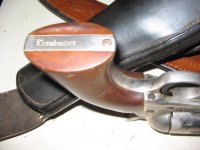 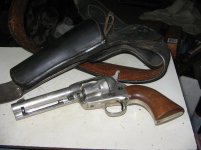 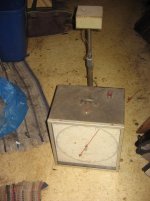 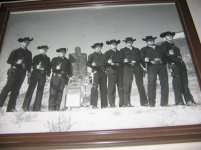 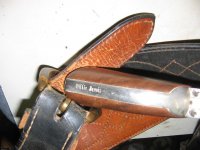 Mostly a HSS is hard and a thing that it won't cut must be harder so Carbide is needed.

The time that this is not true is when the HSS cutter is hard enough..but the fixturing is not solid enough to resist cutting forces, so the HSS cutter quickly dulls.

One test is to strike a part with a file, if the file can cut the part then a proper set-up should allow HSS.

At a certain part hardness, the carbide cutter can be a cost-saving.

The part held in the lathe photo (post 17) would be considered a poor set-up.
A skilled machinist would put a mill jack under the part if forces were toward the table
If the cutting forces were to the cross direction, then an angle plate would be placed/bolted in the go-direction to bump solid the part perhaps with the angle plate touching or with an adjustment screw to bump the part.

The set-up shown would be poor with a HSS or carbide cutter.

I usually consider a mill fixture should be made of 1/2" stock.

Grinding fixtures often can be 3/8 stock if not too long..
You must log in or register to reply here.

Valcut and question re depths