Back in February I got a DoAll VS 612 surface grinder. Being a basic unit, it didn't come with any provisions for limiting or arresting the longitudinal table travel. I searched PM as well as other forums to see if anyone had posted a solution. I found several posts where it was talked about, but nobody had actually done it, so I had to come up with my own. The attached photos show what I came up with. I thought it might be helpful in case anybody else was looking for ideas.

I think the photos are pretty self-explanatory. It's mostly mild steel (scrap) with bronze "brake shoes" captured internally to lock the slidey blocks in place. The last photo shows one of the blocks dismantled and turned upside down to show the details of how it goes together and works. I put cold-blue on the steel to help with preservation since oiling it up seems like a bad idea on a surface grinder. 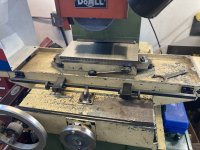 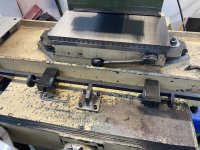 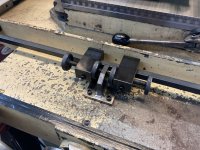 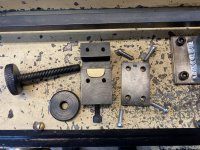 My Kent has something similar without the fine adjust. I thought it was just to prevent over travel of the cable or smashing the digital.
Please clue me in why you would use it while grinding.
Dave
S

Not the OP - but routinely for toolmaking, with fixtures and such. Often just for sharpening.
One of the first things i made for my smaller grinder/ auto 618 was a hard stop, for just such times.

Nice job/great craftsmanship! With the slight comment that stood out that far, it could have some flex. But probably not a factor.

Yes, what Stephen said. Thanks Stephen. Specifically, for starters, I would like to grind the ends of end mills using the face of a cup wheel.

With the slight comment that stood out that far, it could have some flex. But probably not a factor.
Click to expand...

Maybe. I haven't tested that yet. With the finger gauge, it seems pretty rigid with both blocks brought fully to center, i.e. table lock position. I might put a DTI on it and see. The longitudinal feed wheel on this grinder has a clutch that slips pretty easy so the amount of force I can apply is limited. I won't be using the hard stops for normal flat grinding. Mostly they will be used for smaller more delicate motions.

I agree with Stephen, that looks great. I'd like to do something to let my Micromaster 618 lock.

To address Stephens comment about the potential for flex, I set up the following test. I have the holder attached to the spindle housing and the indicator tip against the chuck. I then ran the stops up against the fixed blade and tightened the jamb nuts. I tightened the clutch on the feed wheel firmly enough to move the table without slipping; the same as it is under normal use. I didn't chooch it down with channel locks but I did give it a bit of a grunt.

The first pic shows the setup.

The second pic shows the DTI after zeroing it for testing.

The third pic shows the deflection while I was turning the feed wheel with the clutch slipping. Looks like about a half-thousanth. I can live with that. Good information to know. If someone wants to build their own and needs less deflection, then a heavier rail and wider sliding blocks could make it more robust. Something to keep in mind, however, in actual use I probably won't be cranking the feed handle until the clutch slips. It will be more of a gentle bump so deflection is likely the be negligible. If it is being used as a table lock then I won't be using the handwheel anyway. I doubt the pressure from the grinding wheel will be enough to move it, hopefully.

Thanks everyone for the comments, 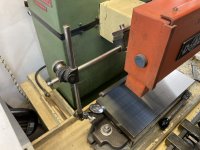 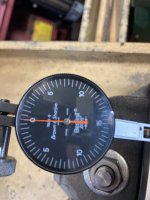 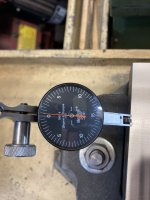 thanks. Almost all my grinding has been just for flat. We very seldom even had the back stop on the chuck at work. With a lot of the spacers I had to grind it would have been in the way.
Dave
You must log in or register to reply here.

M
Surface Grinders... or lack of new decent ones
2