The parameter would be different on that control.
If you have the soft copy of its parameter manual, search for "language"
A

angelw Wrote:
Yes. lets hope that you get a reply in a timely manner. With regards to my source being incognito, I will provide his contact details to you, but I doubt that he would appreciate his details being published on a Forum for all and sundry to start contacting him.
Stefan’s Reply
Even in not conservative standards, 2 weeks is way beyond “a timely manner”. As to the “incognito source” – don’t bother, I am not looking to contact him.
angelw reply
Not surprising. When I asked for an official response, I was told that it’s not Fanuc’s policy to answer programming questions and will refer you to the Machine Tool Builder. My contact, where I got my previous statement was on a colleague to colleague basis.

In recent weeks I've contacted the Victorian manager of Renishaw and had a long and unambiguous conversation with him regarding the use of G31; his name is Mike Davies. He confirmed that their practice is to NOT follow a G31 Block with G53.

angelw Wrote:
Thus far the only evidence you have provided has been anecdotal.
Stefan’s Reply
Let me ignore this impertinence.
angelw reply:
You can ignore it all you like, but it doesn’t change the fact that you haven’t offered any example programs and the resulting error you claim, only anecdotes.

Stefan Wrote:
The “CAUTION” extract included in your previous posts indicates exactly the need of Buffer preventing block after G31 move block:
Specially, in case of reading/writing the system
variables to control signals, coordinates, offset
value, etc., it may different system variable data by
the timing of the NC statement execution. To avoid
this phenomenon, specify such M codes or G
codes before the macro statement, if necessary.
Unfortunately, the example given in this remark is poor and meaningless. As mentioned before, if they would use the N2 #100=#5061 instead of N2 #100=1. , everything would be clear. No NOTE, which with time became !CAUTION, would be needed. But they did not.
angelw reply
All Fanuc Manuals have the following tables, Copied and Pasted from a Fanuc Manual:: 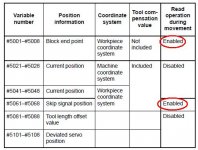 Stefan Wrote:
It also states in Fanuc Manuals that #506_ System Variables can be read during movement.
The operation of touch trigger probe is based on the fact that the data is collected “on the fly”. This is obvious. Once the trigger is executed, the 506* registers are refreshed with the new data. The problem is, which 506* data are used in the next macro statement. In order to prevent the use of old (before the trigger being executed) data, the G53 block is needed.
angelw reply:
The G53 block is NOT needed.

and the result of writing the content of System Variable #5063 into Common Variable #104.

The picture following shows the result of executing the above program with Block Delete off, so that G53 and the Macro Statement writing to Common Variable #105 are executed.

The result? As can be seen, the value read from System Variable #5063 and written to Common Variables #104 and #105 are the same precisely.

The use of G53 following G31 is tantamount to including G01 in consecutive Linear Interpolation Blocks; it does no harm, but its not necessary and it makes no difference to the performance of the program.
Last edited: May 20, 2022
T

Is there a way to store a parameter while a machine is in motion? (Line feed.)

I want to read the spindle load parameter and store it in a variable at different Z depths in a G1 motion.
A

Tichy said:
Is there a way to store a parameter while a machine is in motion? (Line feed.)

I want to read the spindle load parameter and store it in a variable at different Z depths in a G1 motion.
Click to expand...

The short answer is no. The User Macro is not multi-tasking, as is what you would want, a program running in the background polling for changes in the Z position within one Block movement.

However, when one program is being executed, another program can be called by
inputting an interrupt signal from the machine. This is what you would have to do if monitoring and dealing with either axis, or spindle load being outside a set, upper limit.

I have a question regarding ASIN

I have a casting that I've ran before on a 18m control, where I have G54 set to the center of a hole (hole doesnt exist yet), and there's a second hole that I need to tap in the middle of an ear.

G54 doesn't change, but the location of the ear changes (castings vary) so I probe it using renishaw macro 9812. After probing, I set the following variables:

That ran fine in an 18MB control.

Now I've got the same program running on a 0mc control, and after running a couple parts, it is clear the angle isn't calculating correctly.

But it should be about 1.872. Curiously, the angle it calculated seems to be correct, IN RADIANS, not degrees.


But even more curiously, The Smid macro book says this:

I don't see limitations mentioned in Sinha's macro book. And the control generates no alarm when trying to use ASIN.


Now, can I (should I) just convert the values it's giving me to degrees? I haven't wandered back to the control to see if it is consistantly giving radians for different amounts. Or should I calculate the angle differently using ATAN (which I know works because I've used it for different situations on a 0m control.) Also, the difference between ASIN and ATAN should be very small since I don't expect the angle to exceed 2 or 3 degrees in the worst case scenario and it looks like the error would be very small (on the order of .02 degrees or less)

Another note, I find it odd that my 18 control worked flawlessly even though the note says it doesn't work on an 18 either...

Insight would be appreciated.


Edit: I also just learned that ATAN needs to be written as ATAN[#566]/[1.35]. Also, ATAN works perfectly and that's actually more mathematically correct for how I'm locating the probe for checking location. So this is what I'm going with.
Last edited: Jun 9, 2022
S

Smid's book is not for i-series controls. Therefore, there can be some differences in descriptions if you are working on an i-series.

I had tested these functions on an i-series control. Everything was in degrees. Maybe, on older controls, radian is being used. However, I find it odd that ASIN outputs radian and ATAN outputs degree. Both should be same.

Since -x/y is mathematically same as x/-y, and x/y is same as -x/-y, ASIN and ACOS may not output the correct angle in all cases. These are mainly useful if the angle is expected to lie in the first quadrant (0 to 90 degree). Therefore, it is always better to use ATAN which always outputs the correct angle, in all four quadrants. It has the format ATAN[Perpendicular]/[Base]

And yeah, when I wrote the program a couple years ago, I got my soh cah toa mixed up. 1.35 isn't the hypotenuse, it's the adjacent (base), and the probed value is the opposite (perpindicular), so ATAN is what I should have used from the getgo.

Also, the 0m control doesn't seem to be actually giving ASIN values in radians. It's actually a coincidence that the values it calculated are so close to the radian values.

I just had the 0m control evaluate ASIN[1] which should be pi/2 or ~1.57 in radians, but it simply evaluates it as 1. Pretty dumb that the machine can evaluate ASIN without generating an alarm, while generating a wrong value!
S

So, Smid is right!
ASIN is "not available" on 0 series control.

Of course, it is available on 0i
T

On Fanuc 30i, is there a way to read diagnostic data into macro variables? Similar to PRM[] for parameters?
A

thesidetalker said:
On Fanuc 30i, is there a way to read diagnostic data into macro variables? Similar to PRM[] for parameters?
Click to expand...

Does anyone know if the "Q" option below is available on a 18i-TB Fanuc controller?
What Model did they add the Q option?

tteitgen said:
Does anyone know if the "Q" option below is available on a 18i-TB Fanuc controller?
What Model did they add the Q option?

Bill explained this 10 years back.

I've used subroutines that are called by an M98P code on both Fanuc and Haas controls. Reading the manual, Haas makes mention of a "local" sub called by an M97 code. However, the manual has no example of how this (M97) is used. Can someone post a simple example of the format that is used for the...
www.practicalmachinist.com
(Post # 10)
A

The Barcol Impressor is a hand-held portable hardness tester. It is a convenient tool for testing the hardness of aluminum, aluminum alloys, copper, brass and other materials including plastics and fiberglass. The Impressor is designed for use on fabricated parts and assemblies as well as on raw stock.

You can get the product at any of your places, at your doorstep in Pakistan.
Click to expand...

Just my luck. I don't live in Pakistan, otherwise I would get ten. Without bad luck, I'd have no luck at all.
You must log in or register to reply here.

G
my macro program for pcd's , for drilling and or tapping, reaming, countersinking