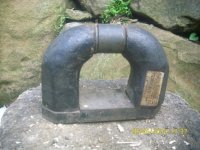 I have two sets of these. Very strong, roughly quarter-circle magnets, with a base and keeper to separate/link trhe small ends. The one pictured I acquired at a yard sale, and the magnets appear to be coated with some sort of cloth and varnish. A very similar set I have from my father has the magnets encased in aluminum, except for the 90 deg ground pole faces. He worked with 1940's era radio equipment, so they may have some connection to that.I use them mostly for finding parts dropped in the grass.

A am guessing that the coatings are to protect a very brittle Alnico alloy.

can anyone here tell their original use?
T

Many of these were in old time radar equipment.

Old bosses from motorola days told of stories where folks were stuck high on walls with these.

The magnets were like cuffs on arms and legs preventing movement.
J

Tony Quiring said:
Many of these were in old time radar equipment.
Click to expand... 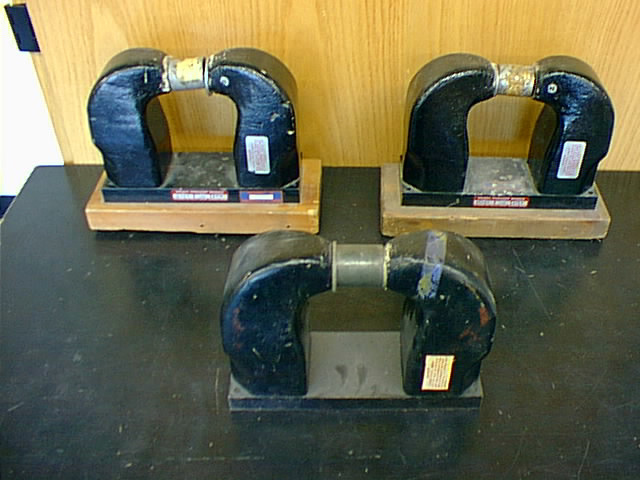 Not too much else there.

Radar magnets. Fantastic! Thanks,Tony, Joe! They are strong enough that it is all I can do to pull the keeper out....probably would pin me to a steel wall.

I wonder how many drunken or violent sailors might have been held in submission with a few of these aboard ship?

They look like they could be Magnetron magnets. Radar and microwave applications.

These are indeed the magnets from the Cavity Magnetron vacuum tube, an invention which contributed mightily to the defeat of the U-boat menace.

This invention was the key to generating substantial amounts of RF power at microwave frequencies.

One of them lives in my living room. The multicavity magnetron was invented in England shortly before WWII. Churchill realized that England didn't have the facilities to properly develop it so he put a scientist named Tizard and a number of scientists who worked with him along with some tubes on a ship to the US. Churchill's instructions were that they were to tell the Americans everything. This was not a quid pro quo, but a complete disclosure in the hopes that the Americans would reciprocate. When the English told the Americans how much power they got from the magnetron, the Americans all but outright called them liars. The English response was "Well test the bloody thing!" In those days we had GE, Westinghouse, Bell Labs, Raytheon, RCA and others in the area and Eitel McCollugh and Litton on the West Coast where we actually made things instead of shipping the work to China. The Americans took a magnetron to one of the labs and came back almost in shock. It really did it. One of the American scientists said afterward that he sat there realizing that all the things they had fantasized about were suddenly possible. The Americans put their tremendous resources on the project and soon were producing magnetrons with a million watt peak outputs.

They made airborne RADAR sets, but were very concerned about the Germans capturing one. They tried thermite bombs to destroy them but there was still enough left to reconstruct. A B24 was shot down over Rotterdam and the Germans copied the magnetron. I had a German LMS1 magnetron but sold it when money got tight.

When I was a 19 year old experimenting with VHF radio, the MIT Radiation Lab Series, produced by the scientists who developed RADAR, was my guru. I had to drive to the St. Louis Public Library and read it there because they would not let me check a volume out. Now I have my own, all 3 feet of shelf space.

The descendants of these magnetrons now heat your coffee in microwave ovens.

The black object to the left of the magnet is a magnetron similar to the one that would be between the poles of the magnet. The large object in the back is a low frequency magnetron, as is the blue gray one at the extreme left.

Reading the accounts in the RadLab Series, one thing that is impressive is that they could have anything they asked for, just for the asking. We had the facilities and skills to make almost anything. Where are they now?

If only we had the rare earth magnets back then.

Next time you want to play take an old disk drive apart and salvage the head magnets. They are serious, and if you aren't, careful dangerous. Watch your fingers!!

magneticanomaly said:
A very similar set I have from my father has the magnets encased in aluminum, except for the 90 deg ground pole faces.
Click to expand...

A friend of mine who does lots of engine cylinder head repair has a set of those aluminum encased magnets. He does magnetic particle crack detection on the heads... up near the valve seats.... and uses those magnets~attached on both sides of that particular cylinder near the seats~ to detect cracks in the area.

Sprinkle the light colored iron filings on the offending cylinder area of the head, then attach the magnets to the head in that area and watch the filings line up around the crack!

I was under the impression that those magnets he has were originally used for that purpose. Next time I see him I'll ask.

Known as Magneflux, but I think the official units have electromagnets. Magneflux is used a lot in aircraft work. Some applications like military aircraft control systems call for all magnefluxed bolts, often ordinary ones but given the additional check.

For some industries such as production assembly line or service line, only a trolley hoist is required. The hoisting mechanism is very much similar to a single girder crane with a small difference of that the crane doesn’t have a movable bridge and the hoisting trolley moves on a fixed girder. Monorail beams are usually I-beams (tapered beam flanges).
M

Can you provide a link to a schematic or picture of the whole magnetron apparatus? I gather it is the device that produces the radio beam whose reflections are then observed in a RADAR apparatus?

I can't recall the scientist's name,but when other scientists had trouble figuring out how the English magnetrons worked,he explained that it worked like a whistle. Then,they caught on.
B

It has been a long time since radar class. As I recall the vacuum tube that was placed in the magnetic field was a series of, open in the center, circular cavities like flower petals. These cavities were sized based on the wavelength of the desired microwave frequency. A very high DC voltage caused the electrons to oscillate around inside the cavity generating the desired signal. The radar signal is a very short pulse of RF energy followed by a pause to allow the receiving apparatus to detect the reflected pulse from the target. Because of the short pulse duration the average transmitter power is very low.

I have no idea how old you were when you drove to the library. It just kinda strikes me funny sometimes when I read such things. I also remember riding my bicycle to the library to get a couple of books. I occasionally had to wait for a particular book to be returned, or the librarian would need to request a book from a different branch. Today kids have the internet with the libraries of the world just one click away......and ......they are either playing some silly game with it or looking at boobs...lol.

toolsteel said:
I have no idea how old you were when you drove to the library. It just kinda strikes me funny sometimes when I read such things. I also remember riding my bicycle to the library to get a couple of books. I occasionally had to wait for a particular book to be returned, or the librarian would need to request a book from a different branch. Today kids have the internet with the libraries of the world just one click away......and ......they are either playing some silly game with it or looking at boobs...lol.
Click to expand...

I was around 19 or 20. I lived way out in St. Louis County so going to the city library was an evening's expedition. No copiers, either, so I had to take notes. The only good thing was that they were in the Reference Room, so they were all on an open shelf and I could go from one to the other. Later someone decided they had to go to the closed stacks and I had to check out each one individually. Then I got my own.

I have one of those cavity magnetron magnets too. Use it to find metal objects I drop in the yard!

If you want to see a much smaller version of a cavity magnetron than these magnets used, just take apart a microwave.

Irby
You must log in or register to reply here.

J
OT: Back from Amsterdam & Prague