My answer is: YES ! These drills are big, old, slow turning, and incredibly well built. They are great for running larger diameter taper shank drills and reamers and counterbores. NOT good for running smaller diameter drills, that is what a light duty round-column drill press is for. If you have the space and headroom in your shop, and have need of a drill press to run heavier drills, as well as the added bonus of being able to run taps, this machine will do you well. I own and use two (2) camelback drills, neither of which is so heavily built, and neither of which has the tapping feature. Great drills, and I run taper shank drills in them to drill structural steel on fabrication work and similar.

Be aware this type of drill is a 'real machine tool'. It is a drill press which puts great amounts of torque to the spindle. ANY job you run on this type drill must be clamped solidly to the table. This is why the table has slots and tee-slots. Were you to try hanging onto the work, if you did not have enough leverage from the length of the work, the drill could spin the work and drag you along with it. Even if you could get to the switch and kill the motor, there is enough stored energy in the rotating parts of these drills that they will coast down with considerable torque still applied to the spindle.

I keep hardware for clamping jobs to the tables of the camelback drills with each drill (one is in my garage, one in my blacksmith shop). If you use a drill press vise, you will need to clamp it to the table. If you have a 'stop bar' bolted to the table, it may work most of the time, but if a drill grabs (as happens when a drill breaks thru the work and catches the burr), the work will climb the drill and spin just that quick, and you could be dragged in and injured seriously.

These old drills were designed in a time when users were expected to have some common sense and take responsibility for their own actions, and know where their body parts were at all times. No safety stickers, no emergency shutdown/emergency braking. The more common drill presses with tubular columns and vee belt drives are light duty machines. If a drill grabs, there is a good chance the vee belt will slip, and the torque produced by a fractional horsepower motor with only 'single reduction' thru the vee belt is considerably less than this old timer will produce.
As such, a modern light duty drill can still spin the work and tear a person up. These old timers are much more torquey due to bigger motors, much deeper reduction between motor shaft and drill spindle, and due to stored energy in the driveline between motor and spindle.

These old drills also use 'friction bearings' (plain bearings) with the only ball bearings usually being the spindle thrust bearing. For this reason, oiling the drill, meaning taking a pump oil can and step ladder, and catching every 'oiling point' prior to use is what is done prior to starting this type drill. There are a LOT of oiling points, not just the bearings on the bottom and top shafts and spindle, but power feed, back gearing, feed trip mechanism, table elevating mechanism, and plenty more given this drill has the tapping feature. I joke that I spend 5 minutes 'dogging down the work' on the table of the drill, 5 more minutes oiling a camelback drill, and maybe 1-2 minutes 'putting up' the flat belt to spend 30 seconds or so drilling a larger diameter hole. I 'take down' the flat belts on all my flat belt driven machine tools when not in immediate use.Flat belts, left under tension on the pulleys, will, over time, become permanently stretched. When this happens, particularly with leather flat belts, the belt is too slack and will slip under load. We used to refer to taking the belts off the pulleys as 'running off the belts'. I do it by hand, but in the old shops, we used to take a smooth wrench handle or hardwood stick and 'walk the belt' from cone step to cone step top change speeds (belt under power), or run the belt off the pulleys. We ran the belts off when we were done for a weekend or not going to use a machine tools for some days (or longer).

If I lived near Ames, I would likely be bidding on that drill and listing one of my camelback drills here to re-home it.

What you are seeing is a heavier duty 'camelback' drill press. It appears to have the extra feature of being able to run taps, aside from drilling/reaming holes. The drill is all intact, nothing appears missing, nothing broken/brazed back together. Table on the drill does not look too abused. The drill appears to have been sitting un-used for a long time judging by dust and very light surface rust. My guess is the drill was removed from service as it was replaced by a newer-design drill.

Marshall & Huschert were the dealers who sold the drill when new. The actual manufacturer could be a number of firms, as this is a commonly used design. There is a mesh belt guard which was likely added by the purchaser/user of the drill (City of Ames ?). The guard was most likely not factory furnished. In a city maintenance shop, or similar facility, the drill likely did not see particularly hard use. Not production work, and it may have sat idle more than seeing use over its life.
P

Here are the photos 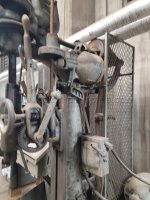 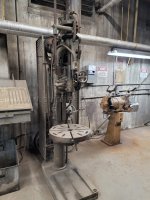 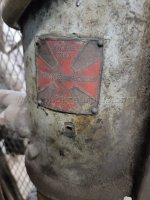 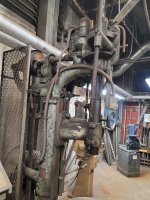 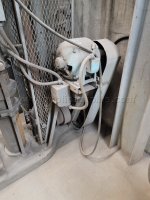 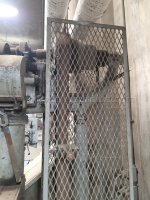 Nice hefty little grinder there, too - Grab it when you pick up the drill.
You'll need it to sharpen all the bits stored in that slant front chest, to the left :~)
L

Tom A said:
Nice hefty little grinder there, too - Grab it when you pick up the drill.
You'll need it to sharpen all the bits stored in that slant front chest, to the left :~)
Click to expand...

The 6" x 48" belt/12" disc grinder is what caught my eye. I have one and find it useful. It is small enough that it will probably sell for more than the drill.

I have been looking through some photos and my best guess for maker is Rockford Drilling Machine Co.

There are several Rockford-like features, however I haven't found any Rockford's with the tapping? gear.

There is a comment on the Vintage Machinery website that says the only name found on their machine was "Rockford Drilling" etched on the spindle. Maybe he means the spindle sleeve?

Peter S said:
I have been looking through some photos and my best guess for maker is Rockford Drilling Machine Co.

There are several Rockford-like features, however I haven't found any Rockford's with the tapping? gear.

There is a comment on the Vintage Machinery website that says the only name found on their machine was "Rockford Drilling" etched on the spindle. Maybe he means the spindle sleeve?
Click to expand...

I have not really checked out the maker of this drill, but it does look like a Rockford Drilling Machine Co.
The Vintage Machinery comment is wrong.

As mentioned so eloquently above, it is a VERY capable machine [in a non OSHA controlled environment], on top of that, it is just WAY COOL! Cleaned up a bit to fully restored, it will be impressive to watch/use or just stare at. You know you want it,,,,,
R

I don't know how other manufacturers achieved the result, but the Rockford that I have has the same worm engagement/release handle.
I only have a long lever that reverses the spindle for tapping, none of the gears and goodies like the one in question.
The lever at the top right sets either forward only or forward/reverse, using the long lever on the left.
The long lever on the right is yanked to release from the flat spring clip and pulled to lower the quill.
If you need more stroke, or to adjust where to begin the stroke, you squeeze the handle midway up the right hand lever and that raises the worm gear.
You then can move the quill using a short lever just poking out the right side in this picture, then release the worm gear handle to engage the worm wheel to use the long right lever.
Of course, you can turn the worm wheel to fine feed.

Robert Lang said:
I have not really checked out the maker of this drill, but it does look like a Rockford Drilling Machine Co.
The Vintage Machinery comment is wrong.

Hi Rob,
The Vintage Machinery comment referred to two machines which had no makers plate (maybe removed by dealer or souvenired later in life?) It might be the case for the machine being auctioned too.

Edit: I found a 2013 post from PM member Greg Brodin which shows the Rockford name on the spindle sleeve. This machine is in Tasmania: 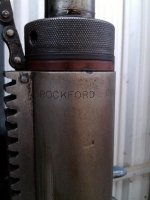