I am trying to realign the turret on a Mazak Slant Turn 15, vintage 1984. I had to remove the turret and the body to replace two studs that were stripped. The studs are inaccessible with the turret on and are too long to remove without taking off the turret body. The body rotates on a center pin and is aligned with a taper pin. It is secured by 6 bolts and 2 studs. The hole for the taper pin had been reamed to 11.2 mm, way too big for a standard oversized pin, so they cut a pin down and drove that bad boy in there. I have ground an oversized pin thinking that it will align the turret body to the factory position. However, once the turret is reinstalled there is now way to adjust the body without removing the turret, should the pin not align the body properly. That would lead me to believe that there is a way to confirm that the movement of turret body is parallel to the x-axis prior to installing the turret. The question is, what is the best way to do this?

Also, while I've got the turret off I want to make sure that the coolant is working properly. There is a white hard piece of plastic that presses against the back of the turret when the id tools are active. It looks pretty mangled and probably won't seal but I can't seem to remove it without damaging something. I have loosened the hidden set screw in the cavity of the lower stud and the one underneath but still no movement. Any suggestions?

And then there is the issue of the tailstock. Someone installed a non mazak dead center. Based on the dings, I would say that it has been tried to be removed several times. I tried to freeze it, but there was too much mass to get any shrinkage. I was thinking that I could hold a bar in the chuck and somehow clamp the other end around the center, then back off the tail stock. Theoretically pulling the center straight out. Any other suggestions?

As I said earlier, this machine is 1984 and I probably never should have never started messing with it. But I'm in this deep, Ethercat AC servo's, custom LinuxCNC control with touchscreen, and completely rewired. Any help to push this project to completion is greatly appreciated. I've just uploaded pictures of the problem at hand. If there is any interest in the retrofit I can post some pictures of that as well. 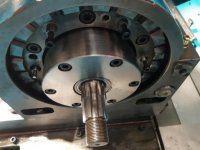 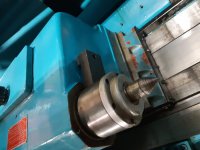 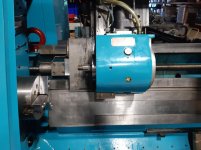 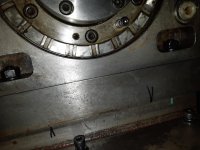 You can drill and tap the coolant hole in the coolant plunger to enable removal. You definitely want new seals and o-rings on that before reassembling the turret.

Don't use your main spindle as an anchor to pull the dead center out. The spindle's bearings are designed primarily for thrust loads, not pull.

Your machine's fixed curvic-coupling and other turret innards look really good! Make sure to grease both halves of the coupling thoroughly with a high-quality, washdown-proof grease.

I see your dilemma with the turret "box", and how it's mounted to the cross slide. That stinks having to remove the turret top plate to access the lock bolts!

You will have to use something to indicate the turret box in before re-assembly.

It's good practice to remove all tapered pins before running the machine. That way, after a crash you can drive your pins in for alignment, lock the turret down, then remove the pins for next time --- keeping your tapered holes and pins pristine.

You only want the lock bolts holding the assembly, it needs to give a little if bumped hard enough!

Toolcats post is what makes this place so good. No Bullshit just help.

Good luck with your Slant Turn 15

Don't use your main spindle as an anchor to pull the dead center out. The spindle's bearings are designed primarily for thrust loads, not pull.
Click to expand...

Words of wisdom...Thanks. I'll have to keep thinking about this one.

You will have to use something to indicate the turret box in before re-assembly.
Click to expand...

Last night I did some checking with a 0.0001" indicator. Measuring at the base of the body where it is mounted to the cross slide. This was the only surface that I could measure over the full length of travel of the x-axis. As I suspected, the pin aligned the turret within a few thou over the length. I removed the pin, a few light taps and it was easily within .0001" over the length. I torqued down the bolts to spec (12mm GR 12.9 120Nm/85 ft-lbs) gave it a little tap and to my surprise the turret moved...

My first thought was that the small coolant gasket behind the turret was pinched. I separated the turret body, the gasket was fine but the surface did seem a bit oily. When you reinstall the turret body you also have to jiggle in two rigid hydraulic lines, its possible that some leaked between the two surfaces from either the valves overhead or the lines themselves when I was wrestling with it. Unlikely though since I spent quite a bit of time cleaning these surfaces prior to reassembly. Nonetheless, I cleaned the surfaces again and left them separated over night to make sure they are completely clean and dry.

On the back of the turret you can see a socket head cap screw sticking out proud of the mating surface of the plunger. I'm pretty sure these are clipping the plunger as it rotates around. Seems like they should be no more than the height of the mating surface but that might mess with the switch that they trip when the turret is clamped. I think it might be the odd/even position indicator. I'll have to double check.

They start tearing up the coolant seal when the turret comes out of alignment on an index. A good sign if you are using a different controller you should make sure it is timing correctly. Having the turret miss the corvic coupling and slide into position destroys that coolant seal. Could be a sign your motor/gearbox is got too much slop. (IIRC)
You must log in or register to reply here.