Anyone using Mcosmos? I need to rotate my probe to a specific angle (PH20), but in the Change Probe by Angle function, I need to use the IJK vectors.
I can't seem to make the connection between the two.
The manuals are pathetic and I couldn't find anything online.
Seems like it shouldn't be that hard. I just want to use IJK to rotate to a specific A/B angle.
J

There isn't a general answer to your question(s); we need a full description of the (a = 0, b = 0) condition, if the object being rotated is a single-axis or a three-axis system, which A-or-B axis remains parallel to which X-or-Y-or-Z axis no matter how the other B-or-A axis is rotated.

And, unfortunately, I am swamped enough over the next few days that I probably won't be able to devote any significant time until next week.

I'll offer a few generalities, that may help you figure out your own answer:

The Direction (a mathematical construct that is often defined as "a Vector of undefined Radius", which is a pretty-poor definition since a Vector is defined as having "a Direction and Radius".

If we rotate the A, B, C system around A by some amount a, A does not change position with respect to the X, Y, Z Coordinate Frame, but B and C both move in the Y, Z Plane, "becoming" B' and C', which effectively creates a new Coordinate Reference Frame A' B' C'.

Subsequent rotation about B' rotates A' and C' in the plane that they define, creating another new Coordinate Reference Frame A", B", C".

If, as I suspect, you are asking how to determine the (i, j, k) values of C", and the geometry of the starting position is as I speculated . . . I THINK that the simple algorithms are these:

By way of warning, I haven't done this type of arithmetic in a few years, and I'm pretty well oxidized. I strongly urge you to draw your own cartoons, and try to understand the geometry of the situation.

Finally, by way of a tip: When you draw your cartoons, set the A-or-B rotational axis that DOESN'T change position relative to the X,Y,Z Cartesian frame perpendicular to the paper.

thanks for your help. I'll be playing with it later
J

I should add that I used the word "parallel" to mean pointing in the same Direction; pointing in exactly-opposite Directions is what I call "Anti-parallel".

I assumed that both the A, B, C and X, Y, Z coordinate frames are right-hand orthogonal.
L

Here's a view of what I'm doing. I had to block out some of it for NDA reasons
X is left to right
Y is forth and back
Z is up and down 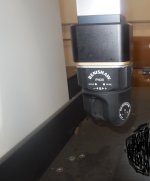 At a quick glance, I'm thinking that your Axis A is always perpendicular to Axes X and Y, while Axis B is always parallel to the plane defined by Axes X and Y.

I think this might be the wrong picture, I think B is off 180 deg. I'll check tomorrow.
With the probe pointing straight down is A0 /B0, which has the vector I0, J0, K-1
So, B is really C as it rotates around Z
With B at 0 deg, A is A as it rotates around X
You must log in or register to reply here.