The earlier transmission light DIC microscopes used a fixed position polarizer, fixed position analyzer, a DIC prisim mounted in the condenser and a sliding DIC prism behind the objective. The DIC slider was mounted in the 45 Deg position slot above the objective The slider could be moved within the slot by turning a screw to adjust the DIC image contrast (bias retardation). The system could measure the phase shift between the specimen light beam and the reference light beam if a micrometer screw was installed and one knew the relation between the screw position and the bias retardation. The De Senarmont setup allows one to measure the phase shift in angstroms by leaving the DIC slider in a fixed position The bias retardation can be measured by rotating the analyzer. The analyzer position can be read to within 1/10 degree. The resolution of the measurement is 5500 angstroms/ 3600 divisions or 1.5 angstroms. This is a much improved setup.

If your sliders are fixed in position then you have a microscope set up for De Senarmont DIC imaging. Do not modify the sliders containing the prisms. It is a step backwards in design and you may damage the prisms.

The DIC image contrast depends on very careful alignment of the crossed polarizer and analyzer, the orientation of the 1/4 wave plate fast axis with respect to the polarizer axis and a Kohler condenser setup. The alignment procedure is detailed in the Nikon tutorial web page. It is not a quick process The procedure will be about the same for incident light DIC with the exception that there is no condenser DIC prism to align.

My Zeiss Universal does not produce the high quality images shown in the alignment tutorial. There may be some strain in the originally strain free optics and the polarizing filters are showing signs of old age.

The full wave plate produces color contrast by removing the green portion of the light spectrum. Instead of white light illumination, the image has a magenta color band shifting to blue and yellow color bands with a change in bias retardation.
Click to expand...

The analyzer for this scope only rotates from 0°- 45° - and is not otherwise graduated. I may try my hand at making my own analyzer with a little better control over rotation - and without the ¼ lambda plate just to see how it differs. The image quality is already very good, but I enjoy experimentation.

Here is an example of plain brightfield vs DIC in the same exact place. No change or movement except for the lighting method. 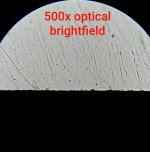 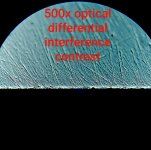 And another. The lower bevel on this blade was so smooth I couldn't really see scratches without the DIC. The magnification is the same on these two but the blade was imaged in different places, so the bevel width is a little different. 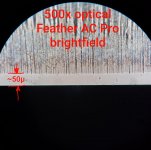 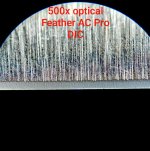 eKretz, in that fourth photo, is the "shadowed overhang" an artifact of the contrast enhancement?

sfriedberg said:
eKretz, in that fourth photo, is the "shadowed overhang" an artifact of the contrast enhancement?
Click to expand...

I think you're asking about the area at the top of the primary bevel? If so, yes. The DIC shows different elevations and differing angles as differences in brightness. It is probably showing a difference in the shape of that bevel.

Most production straight razor blades are made somewhat convex. Judging by the patents I've read, this is done purposely for several reasons - one is that the blades are generally sharpened as they go down a line, using a grinding/honing apparatus that uses a conical wheel or wheels, such that the wheels act upon the edge progressively as the blade material travels past, creating a convexed profile. It also apparently creates a more comfortable edge that is less likely to stick to the skin as it shaves.

This one is kinda cool. This is a single diamond on a pretty worn out Eze-Lap coarse diamond sharpening paddle. The DIC prism was shifted slightly to add some coloration. You can see the surface texture of the diamond pretty well, though it's not entirely in the depth of field. 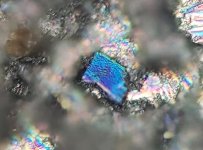 When I was an apprentice in the late 70's I worked in a metallurgy lab for a few weeks and we had a type of metallurgical microscope. It had crosshairs built into the recticle and a light but also had a micrometer table on it that you could move in X Y and we would use it to check case hardness depth.

We'd cut a part in half, belt sand it and then polish it like a mirror on a lead lapping table with lapping compound and water trickling onto the motorized plates. Then etch it with acid and you could see the crystal structure of the steel that was different where the steel was hard. One of the metallurgists also told me that this is the same process that the FBI uses to bring back serial numbers that have been ground off of guns.
You must log in or register to reply here.

Adventures with a Lleaking FP3 / wipers & seals maintenance -- some questions