I just recently Finishing restoring an Enco BP Clone for the shop and am a new to milling. I have had a lathe for years and am understand feeds and speeds ect. The machine is in almost new shape, .005 or less backlash in the screws, Hard chromed ways with no wear, Nice and tight. 5hp 3phase motor on an allen bradley VFD, so HP is not a problem with this girl,

Most of what i do is general Repair and one off parts, Mostly work in steel.

I have worn out several HSS end mills on the last couple parts i have made and there has to be a tough general ruffing tool that will work well with out scraping an expensive end mills.

The last parts i just did were Cast iron someone had nickel welded steel reinforcements over a crack, I milled all the crap back to the original surface with a Niagara cutter Ruffing HSS end mill and it was dull by the end.

I also did some buildup TIG brazing Aluminum bronze to build up missing tabs on a wells band saw guide arm. And it ATE end mills. Like an average or 2-3 mins of cutting before totally destroyed.

On the lathe i use Sharp Brazed carbide tools for things like this and have a carbide grinder to resharpen then and it cost next to nothing to do things like this, But at $20-30 each for a good end mill it costing a lot in tooling to machine this stuff. I got this job done but got to be a better way.

I have a 2in facing mill with round incerts that works great but on this stuff there was no to get into tight ares with it.

Any recomendations for a good general pourpse tool for jobs like this?
D

When welding cast iron, if the heat affected zone cools too rapidly it gets so hard in that area it is difficult to machine with carbide. Only solution I know of is to bring the whole part up to a very high temp, weld, and then cool very slowly.

Aluminum Bronze.. Miserable stuff, toss some nickel in it, and it just gets worse..

Its not hard to cut at all, its almost like aluminum, But.. There is always a 'but', its
incredibly abrasive.

The first time I messed with aluminum nickel bronze, it was a casting. 2 holes in it,
fairly wide tolerance, but landed at a non-drill size, so I reamed it. First couple
came out fine, so I just kept running them. looked fine, no strange noises.

About half way through, checked the holes again, though I didn't have a reason to
think they would be bad.. The REAMED hole was .015 smaller than the DRILL
diameter.. Slightly tapered of course.. That ali-bronze just wore that HSS away.

Nickel. I've never machined pure nickel, but isn't that a major ingredient in Inconel?
Not fun to cut...

I'd say toss your HSS into the garbage, and get some carbide. I know, its 2-3X as
much as HSS crap, but it can run 3-5 times faster and will remove 10 to 20X more
material per endmill.

And then of course, you can't use carbide endmills on a manual machine.. BS!!!

Get the fancy stuff. Coated, variable flute/helix with a corner radius.. I know... But
thats for big CNC machines.. Again.. BS!!!! Those fancy endmills are great on a big
fancy machine, but do you know where the variable flute/helix really shines.. Less
than rigid, floppy machines.. And you don't need big endmills. You don't need a 3/4",
like you are probably doing with the HSS.

Calculate your feeds and speeds, but you don't need feeds, its a manual mill. BS again.
You calculate that you need 10 inches a minute.. That's 50 cranks of the handle in a minute.
So "One Missisissippi.. Two Mississippi etc.." Taking a little less than one turn per Mississippi.

You also might find out that 3hp is not a lot. Used to use a CNC knee mill, and once I
changed over to new fancy tools, I always had to back figure for HP, and then get my feeds,
and widths and depths of cut adjusted to not stall the spindle.

You need carbide, and don't buy the uncoated square corner 4 fluters. Buy a few from Maritool,
his stuff is really good, and its very fairly priced, and its easy to buy just a few to try them out.
B

Thanks for the advice, I will get some carbide on the way!
O

bugman53 said:
Thanks for the advice, I will get some carbide on the way!
Click to expand...

Get yourself a Ripper Cutter its a roughing tool.That will do the type of thing your talking about.Remember if your machining weld or chilled cast iron,etc you should be on a relatively slow speed.Too fast and you will burn your tool out
N

Or use something you can sharpen yourself, eg, brazed carbide bit in a flycutter or even a carbide boring bar in the spindle or offhand ground from a broken carbide blank. Many possibilities for single point tooling, especially when a sharp edge is only several steps to the grinder and back.

Repair involving machining brazed/welded anything is tough. The point is to get through it without wrecking tooling. It's slow, but if there's only one part and no spares, it's slow anyway.
A

Bobw said:
Nickel. I've never machined pure nickel, but isn't that a major ingredient in Inconel?
Not fun to cut...
Click to expand...

A loooooonnnnngggg time ago, I made some crucible sample cups out of pure nickel. On a small Southbend. Rex 70. Wasn't bad at all. Material came off more as crumbs than anything else.
They let me keep the extra one. Been floating around in my tool box for nearly 50 years. 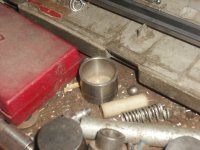 onecut said:
Get yourself a Ripper Cutter its a roughing tool.That will do the type of thing your talking about.Remember if your machining weld or chilled cast iron,etc you should be on a relatively slow speed.Too fast and you will burn your tool out
Click to expand...

Plus 1 for the riffing cutters. Not the best finish but they stay cooler which makes a big difference in tool life.
You must log in or register to reply here.